Although there’s plenty of culture and so on in Dundee (but see below for an update), we were actually there to cycle. First stop was Perth, which might have made a better base if only it had a backpacker’s hostel (there’s a hostel at Perth College which is only open from mid-June until the end of August). It seems a sort of Scottish Truro, with an old-money feel to it and a high-brow cultural profile – in particular at the Perth Concert Hall and Perth Theatre. I was especially struck by the line-up of performers in the Perth Piano Sundays series – the likes of Peter Donohoe, Jeremy Denk, Viktoria Postnikova – nae bad! Just a few days after getting home, a Radio 3 announcer praised the wood-panelled Perth Concert Hall as one of the great spaces for chamber music in the UK. Neither Perth nor Truro is forced by the presence of a university to be cool and relevant. You could argue that Dundee is to Perth as Glasgow is to Edinburgh – a brasher younger sibling that’s trying to cast off an industrial past and become a cultural hub, largely through riverside regeneration – and it’s doing fine, of course, but with a more street/youth profile. 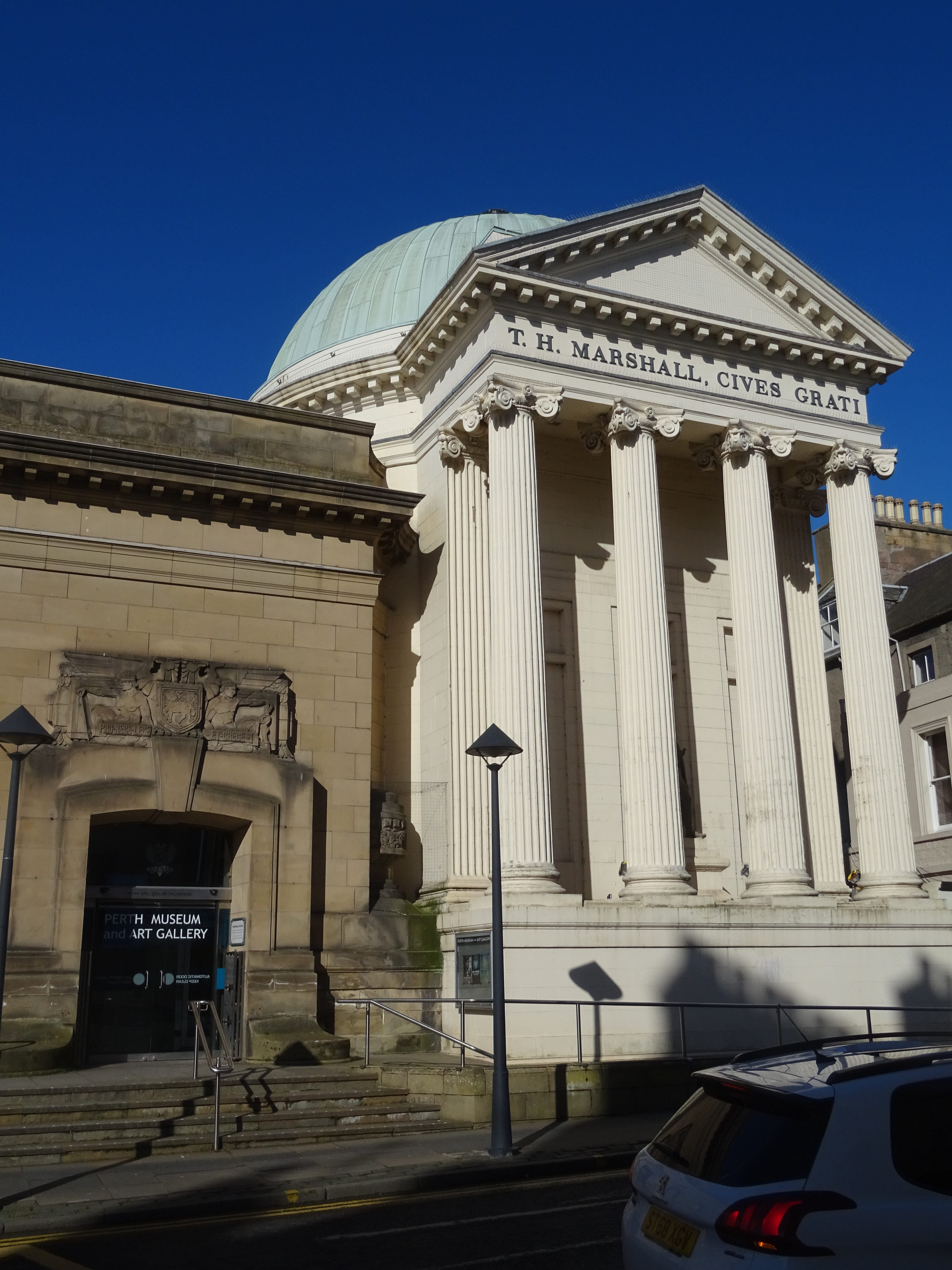 The Perth Museum is fairly small but well presented, covering geology, natural history, prehistory and actual history. Perthshire has a rich store of prehistoric remains, with about 70 stone circles and later henges and hillforts. There’s also the Carpow longboat, about 3000 years old, so not as ancient as the Ferriby Boats. I had no idea that the Romans had made it up here and even started building Rome’s earliest frontier system (before the Antonine and Hadrian’s Walls further south in Scotland, and also the Limes Danubianus past Bratislava) along the Gask Ridge southwest from Perth – I must try to retrace it some time.

Nor did I know that William the Conqueror (Billy the Conk, as he’s known on The History of England podcast) came to Forteviot, near Perth, in 1072, when King Malcolm accepted him as his overlord – but he must have had his fingers crossed, because within a decade he was raiding England again. Perth became known as ‘a capital’ of Scotland, due to the royal court frequently staying here and the presence of Scone Abbey, where the King of Scots was crowned, just across the river; like Dundee, it became a Royal Burgh in the early 12th century. After this local history went a bit quiet until the nineteenth century, when the railway arrived and hotels started serving local drinks – Arthur Bell, John Dewar, and Matthew Gloag became known for their whiskies, and Sandemans imported port. In 1819 there were 44 distilleries here, the last closing in 2016. General Accident was founded here in 1885 and had its headquarters here for 113 years – it evolved into Aviva, which is based, inevitably, in London, but reintroduced the General Accident brand in 2013.

There’s also a bit of art here, notably two sculpture rotundas and two big Lawrence portraits and a Raeburn of the fiddler Niel Gow. There was also a temporary show about Margaret Morris (1891-1980), who created modern dance (a la Isadora Duncan) in Britain – she married the Scottish Colourist painter John Duncan Fergusson, whose parents were from Perthshire and who regarded the Perthshire Highlands as his spiritual home – many of his works and also her archive are held at the Fergusson Gallery, a former watertower nearby at the corner of Tay St and Marshall Place – this apparently sees few visitors, so there’s talk of relocating the collection.

Incidentally, we did have a scone in Scone, and a cuppa in Cupar. 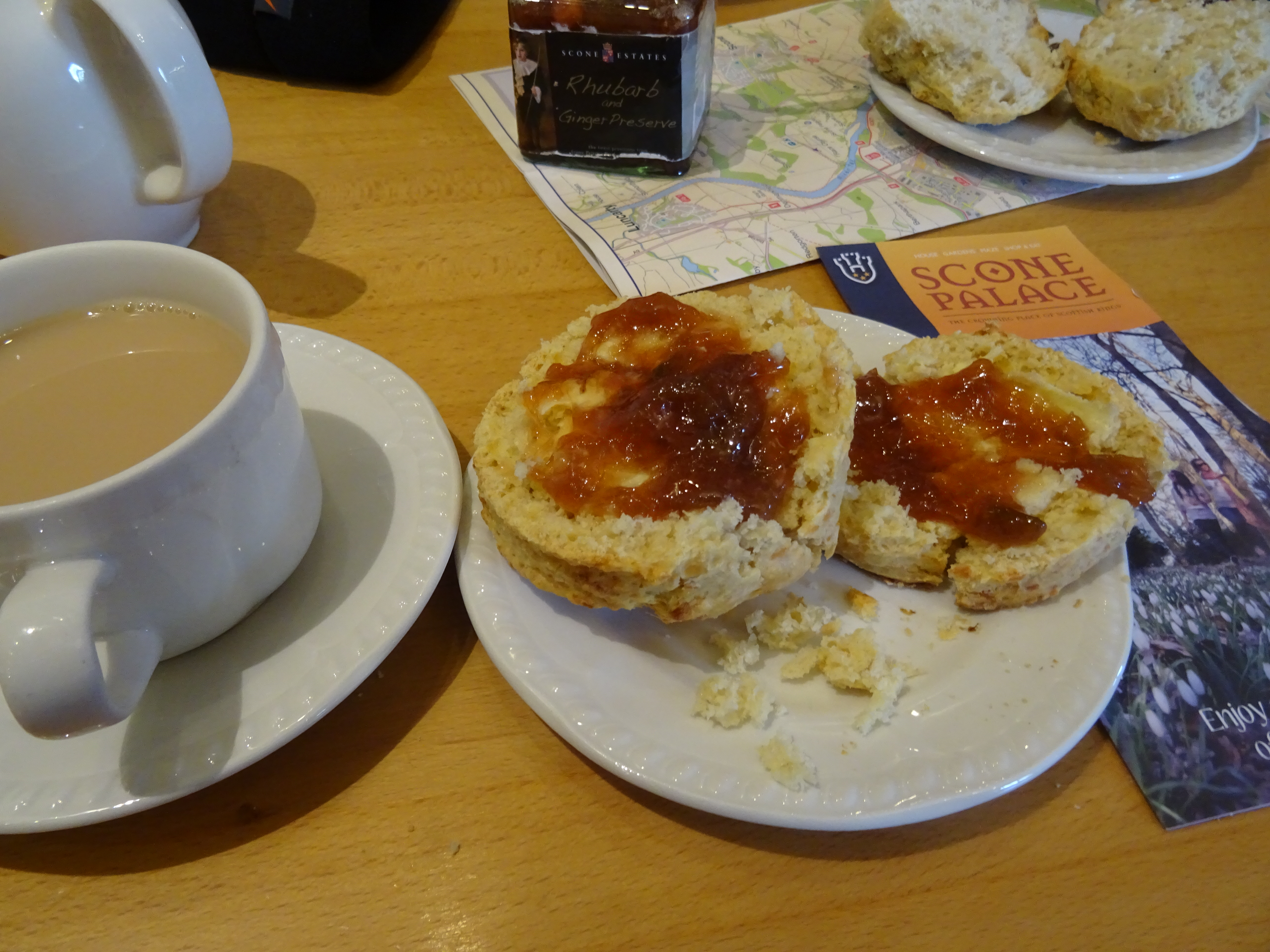 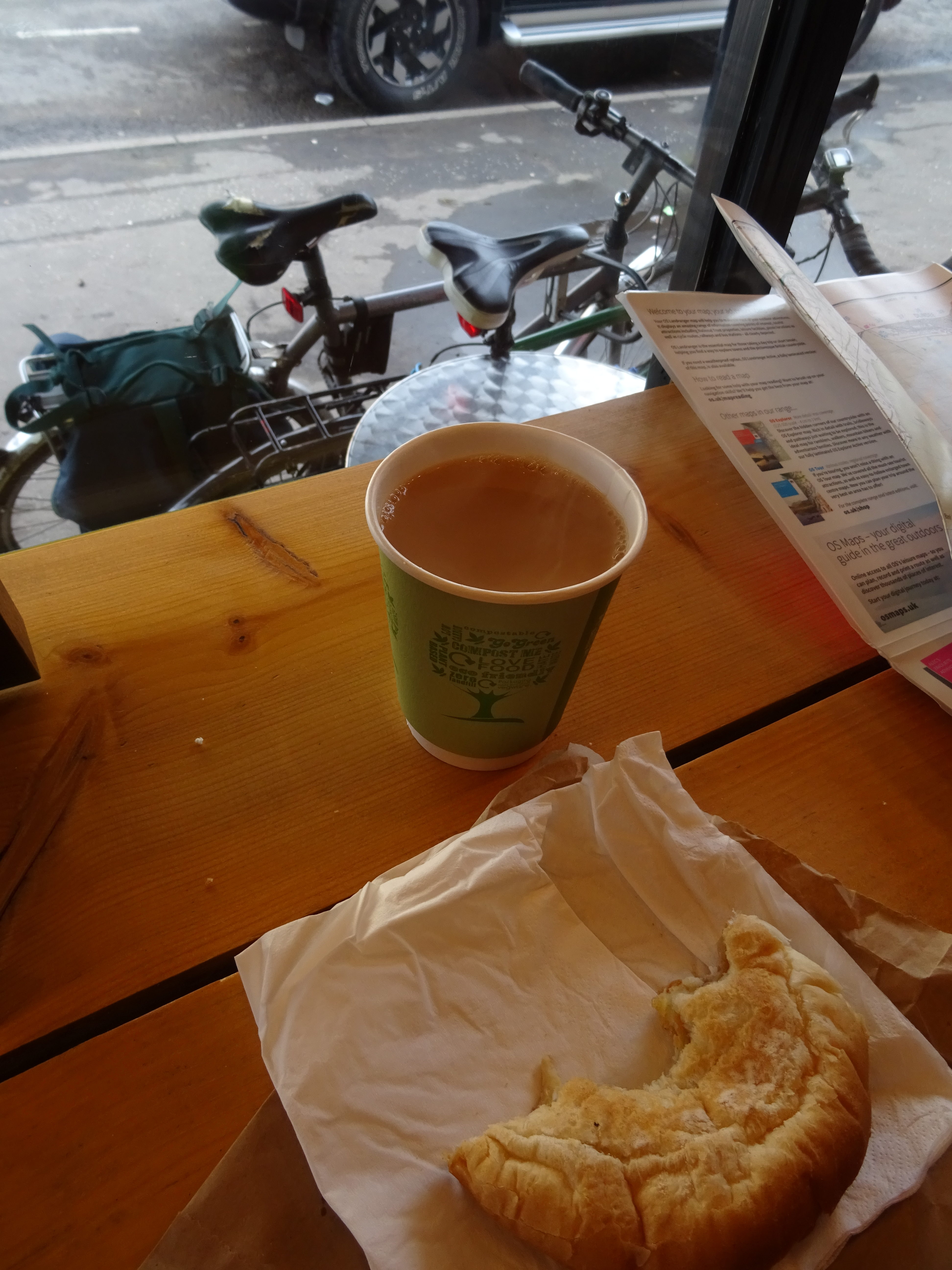 I’ve been to St Andrews a couple of times before and didn’t linger this time – but I couldn’t help noticing that there are a lot of ruined churches, that the golf obsession is under control and largely confined to the west side of town near the Royal & Ancient, and that even though there are plenty of visitors there are quite a lot of cafés (and all the bike shops) which don’t open on a Sunday. It has more museums than I remembered, but the nicely named MUSA (Museum of the University of St Andrews) is closed for a refurb. There also seemed to be rather a lot of visible lesbians around this time, which was definitely not the case in Dundee or Perth (and was news to my friends who studied there a couple of decades ago).

There’s a pleasant cycle route up the coast northeast from Dundee (now that they’ve sorted out the section past the docks) to Broughty Ferry and on (between railway and golf links) to Carnoustie, where I stayed on my last visit. Broughty Ferry is a more salubrious suburb of Dundee, with decent pubs (see below) and cafés, including (since 1897) the excellent Goodfellow & Steven bakery and tea rooms. Broughty Ferry castle was closed for toilet refurbishment when we passed through, but houses a free museum; guarding the mouth of the Tay since 1496, it sticks out like a rotten tooth from far away. 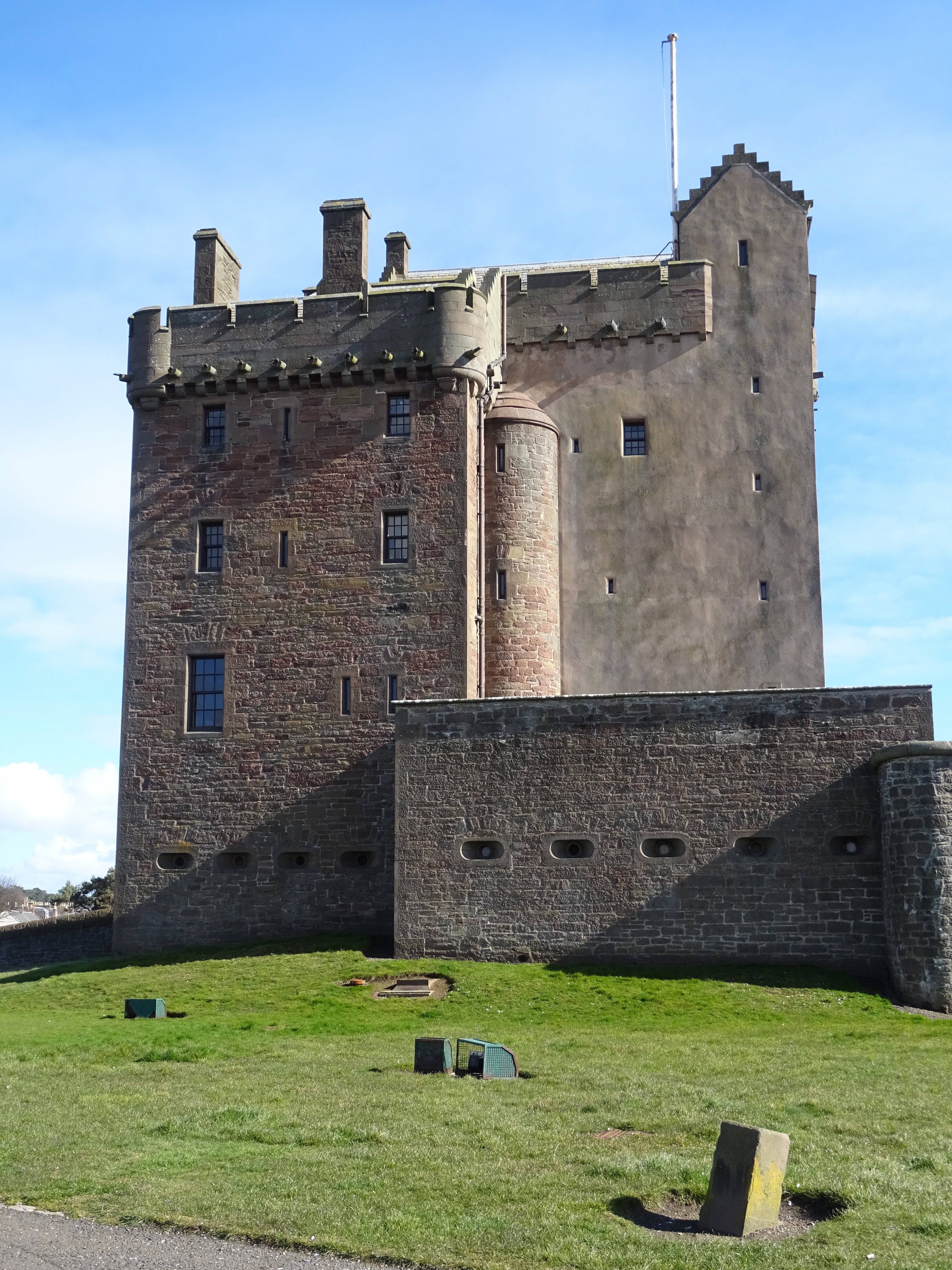 A really good pub takes a bit of finding in Dundee, I’m sorry to say. The Dundonians do like a drink, and there are plenty of pubs in the centre that are always full and noisy, but the main problem is that they’re not interested in live (real) ale – there are rows of gas-pressure dispensers promising IPAs and so on, as well as regular lagers, and frankly they taste much the same – pretty flat. The range of malt whiskies was fairly generic, too. Early in 2018 a real ale pub, the Copper Still, opened in the centre, but by the end of the year it had closed. As you’d expect, the university area, just west of the centre, has some more interesting options, notably the Speedwell, known mainly for its fabulous 1903 interior (there’s an interesting partition with a swinging door between two bar areas) – it has just three well-hidden real ales among a forest of gas dispensers, but the Deuchars was fine and the company was cheery.

Tickety Boo’s, at 51 Commercial St, has a fine interior too, with original stained glass, and is one of the nicest options in the centre, although it’s a bit small and short of seating. Even more than elsewhere, many of the pubs in the centre of Dundee are former banks – there’s the Bank Bar, a former TSB branch at 7 Union St (which usually has four real ales on tap as well as gins and food), not to be confused with the Old Bank Bar at 34 Reform St, The Trades House at 40 Nethergate (with wonderful stained glass and an engraved mirror) or The Counting House at 67 Reform St (once a branch of the Royal Bank of Scotland, opened in 1856). The last is a Wetherspoons, run by a Europhobic nutter, but it’s attractively restored and has decent enough (and cheap) beers, notably from Stewart’s in Edinburgh. Wetherspoons also run Jolly’s Hotel in Broughty Ferry and the Capital Asset in Perth (neither of which we sampled).

The best option in Broughty Ferry is the Fisherman’s Tavern, which has been in the Good Beer Guide since 1975 (except for 2013, whoops) – like The Trades House, it’s owned by Belhaven, which generally means a better than average pub.

In Perth, the Green Room (good for live music too), the Greyfriars Bar and the Kirkside Bar are the best real ale pubs, but actually the ideal would be to go a little way north to Moulin, a suburb of Pitlochry, where the Moulin Brewery has been building a great reputation since 1995 (Inveralmond isn’t bad either, but they’ve only been going since 1997, so what would they know?). The multinational craft beer monster that is Brewdog (founded in Aberdeen) also has pubs (or ‘bars’) in Dundee and Perth, if that’s your thing. I just noticed yesterday that Brewdog will be opening a pub here in Cambridge soon – good news, if you take the view that any new pub expands the market for real ale and good beer.

As promised at the start – an update on Dundee’s cultural offering – the West Ward Works on Guthrie Street, where the Beano and Dandy annuals were printed, is to be redeveloped into a hub for designers, artists and other creative workers and companies, and will house a comic museum and spaces for live performances and exhibitions.
And it seems that an e-bike sharing scheme will open in July (2019) – presumably using charging stations rather than the dockless model that has become so popular recently for non-electric bike-sharing schemes.