I’ve always regarded Charles Darwin as one of the truly great figures of history (even though his male-dominated view of breeding behaviour is under intense scrutiny at the moment). Writing guidebooks to Chile and Uruguay, I came across many records of his travels there and included as many quotations from his journals as I could – his descriptions of 1830s South America are still fresh and relevant. I’ve included plenty of books by and about Darwin in the reading lists at the backs of these books, and looking in turn at the references and acknowledgements of Darwin and the Barnacle by Rebecca Stott, it was brought home to me how much Cambridge, where I live, is a global centre of Darwin studies. This is partly because of the letters and archives held in the Cambridge University Library, and partly because two of his sons taught at the university and their families were important figures in local life (and the foundation of Darwin College is part of this). The university’s museums also hold many of his specimens – I particularly like the story about a volunteer at the Museum of Zoology discovering – on Darwin’s 200th birthday – a tinamou egg that he had collected in Uruguay but had been damaged because he packed it in too small a box. It turned out to be the only surviving egg collected by him.

The key text on the Darwins of Cambridge is the much-loved Period Piece (1952 – and supposedly never out of print since) by Gwen Raverat (1885-1957), daughter of Sir George Darwin, Darwin’s son and Professor of Astronomy at Cambridge from 1883. She was a fine artist, marrying fellow artist Jacques Raverat and leading a revival of wood engravings, which became a distinctive feature of twentieth-century British art. I have my grandmother’s copy of Period Piece, a hardback printed in 1954, with Raverat’s charming illustrations, including some of their family home, Newnham Grange, now part of Darwin College (and somewhat changed). Later in her life, in 1946, she moved into The Old Granary, by the river at the end of Newnham Grange’s garden, now also part of Darwin College. This is a graduate-only college, founded in 1965 as a spin-off from Caius, St John’s and Trinity Colleges, incorporating existing houses with modern buildings that fit in perfectly well (and the riverside gardens are lovely). One of the college’s features that I particularly applaud is the DarBar travel grants, three awards a year of £200 and a free pre-departure drink, in return for sending a postcard to the college bar.

Other Darwin houses in Cambridge have also been absorbed into modern colleges – at the south end of the Huntingdon Road, The Grove was home to Charles Darwin’s widow, surrounded by meadows (long gone) where her sons Frank and Horace built homes for their families. Built in 1813, it’s now home to the MCR (graduate common room) of Fitzwilliam College. Horace (who founded the Cambridge Scientific Instrument Company and became Mayor of Cambridge) built The Orchard, a smallish Tudor-style house that’s part of Murray Edwards College (formerly New Hall).

One aspect of Period Piece that I especially enjoy is the description of the beginnings of Cambridge’s cycling culture in the 1890s (you may recall that I pondered cycling’s rôle in the development of West Cambridge). ‘My mother had (I believe) the first female tricycle in Cambridge; and I had a little one, and we used to go out on family rides, all together …  I found it very hard work, pounding away on my hard tyres; a glorious, but not a pleasurable pastime. Then one day, at lunch, my father said he had just seen a new kind of tyre, filled up with air, and he thought it might be a success. And soon after that everyone had bicycles, ladies and all; and bicycling became the smart thing in Society, and the lords and ladies had their pictures in the papers, riding along in the park, in straw boater hats.’ 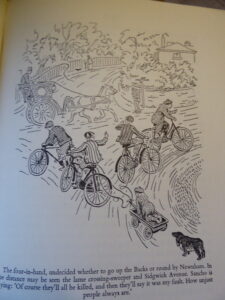 She also writes about cycling alone down the Backs after dark, coming back from her grandmother’s or uncle’s houses, and the ‘great gulfs of darkness between the faint gas-lamps’, as well as the ‘most unpleasant people’ living in the tumbledown cottages of Mount Pleasant, who knocked her off her bike and pulled her hair. Why she didn’t go via Magdalene Bridge and the city centre I don’t know – maybe the undergraduates were just as boisterous and troublesome?

I also went recently to visit Charles Darwin’s home, Down House, an easy bike ride from Orpington station in Kent – the village of Down was renamed Downe in the 1840s, but the house remained Down. Charles and Emma moved here in 1842, after four years on Upper Gower Street in London, and lived here for the rest of his life. The image of him living as a bit of a hermit is widespread but wrong – not only was he involved in village life (as a magistrate, among other things) but he also communicated constantly with family and with the wider scientific community, with 14,500 letters surviving to and from him. In 1851 he spent nearly £20 (equivalent to £1000 now) on paper, postage etc, and in 1877 he spent nearly £54. 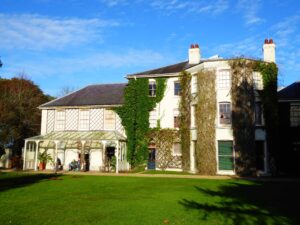 I’ve wanted to go there for ages, possibly since 2016 when I might have read about the reopening of the main bedroom, along with a collection of prints by Renaissance artists such as Raphael, Titian and Sebastiano del Piombo. Incidentally, there are also now prints by Gwen Raverat on the upstairs landing, although these did not exist when the family lived here. Anyway, it’s all beautifully cared for (thank you, English Heritage) and there’s a real sense of it as a family home – the garden is particularly full of family memories, with the sites of various natural history experiments, not to mention the cold showers that Darwin took in a bid to settle his ‘weak digestion’. There are good factual displays, but I didn’t learn anything that I hadn’t already read in Darwin and the Barnacle – however, I did come away thinking that there really should be a full-on Darwin Museum, to go into his amazing career in more detail. Maybe on a nearby site at Downe – not in Cambridge, thanks all the same.

But I can’t really recommend the café, which tries to be National Trust-y but just can’t manage the same quality of staff, in particular. Never mind, there are two good partly Tudor pubs in the village.

2 thoughts on “Darwin in Cambridge and Kent”