I’ve been to Seattle and the major Californian cities a few times over the last couple of decades, but I hadn’t been to Portland since 1984. Then I spent my university vacation hitchhiking around North America and didn’t pay for a single night’s accommodation. This time I travelled by train and the odd plane and stayed in HI hostels, and I have to say, I’ve changed far less than Portland has. I recall that my main reason for visiting the city was a few showpieces of postmodern architecture, notably Michael Graves’ Portland Building (1982) and the KOIN Centre (1984), which failed to thrill me. I assume I did visit the Portland Art Museum because I remember being impressed by the wealth of Asian art in the museums up the West Coast from San Francisco to Vancouver – but now I can state that it must be one of the dozen or so best art collections in the USA (see below). It has expanded since my first visit, having marked its centennial in 1992 by expanding into a former Masonic temple next door – the two buildings are currently separated by a walkway, with a tunnel linking them, but the plan is to build a new pavilion to fill the gap.

Across the Park Blocks from the Art Museum is the Oregon Historical Society, with an excellent modern museum on the history of the state and the city which totally (alas) dominates it. As a fine port where the Willamette river (Goddammit Janet, it’s Willamette, if you’re having trouble remembering how to pronounce it – the original Clackamas name is Wal-lamt) meets the mighty Columbia, Portland developed as an industrial city but was then overtaken by Seattle and Tacoma; after a flurry of World War II ship-building it declined (apart from Nike being established here in 1964) and by the 1970s was marked by post-industrial decline, especially along the waterfront. However the city planners began a process of restoring historic buildings and converting rail yards into parks and museums, while also encouraging modern (and postmodern) developments, and creating a pedestrian-, cyclist- and public transport-focussed city centre. The Old Town/Chinatown area, largely warehouses and commercial buildings on reclaimed land along the Willamette, has been gentrified, and in the area just inland (south of Union Station), former railway sidings were developed into a residential zone known as the Pearl District from the mid-1990s; at the district’s north end are some modern parks such as the slightly Zen Tanner Springs Park (2005), and at the south end are the Brewery Blocks, now housing hip loft-style apartments as well as boutiques, bars and restaurants. On the less attractive east bank of the river, the Oregon Museum of Science and Industry and the Oregon Rail Heritage Center are also on former industrial land.

So Portland had a reputation for being fairly green, liberal and arty long before hipsterdom was invented. Then came a TV series called Portlandia in 2011, which the locals, looking back, say is when the city was ruined for them; the series is coming to an end in 2018. Its satirical sketches, mocking a fantasyland of nerdy liberal narcissists, perversely led to everyone wanting to move to Portland, or at least to Portlandia, forcing rents up and driving the boho artists out. Bars were replaced by artisanal candle-makers, and something of what made Portland one of America’s most liveable cities has  been lost. I saw hardly any lumberjack shirts or fixed-gear bicycles, but the city still seems a good place to be. That, plus the rising property prices, may partly explain the high numbers of homeless people on the streets – disproportionately African-American as one might expect.

In fact I was staggered to find that the original constitution of Oregon decreed that the state was to be a whites-only paradise (although, to be fair, slavery was banned too), and it was known as a racist city until at least the 1970s, with regular police shootings that of course couldn’t happen nowadays – could they? Minorities have grown from 3.6% of Oregon’s population in 1960 to 16.4% in 2010, and as the state grows from 4 million now to perhaps 6 million by 2050 the number of Latinos in particular is expected to increase disproportionately.

There’s been craft brewing here since the 1980s, and Portland now boasts both the highest number of breweries per capita in the US and the highest expenditure per capita on beer. There are now at least 70 craft breweries (plus 16 urban wineries!) – the oldest is the Bridgeport Brewery, founded in 1984 and now a pretty huge concern. I’ve visited the Deschutes Brewery in Bend, Oregon, which has a pub in Portland, and that’s also a pretty big operation now. They’re fine, of course, but I’d like to try something slightly more adventurous – one contender is Zoiglhaus (quite a way east of the centre, unfortunately), adapting German brewing techniques to hops-forward American tastes (they’ve even created a ‘German IPA’). You can take a pub tour with Brewvana Portland Brewery Tours. But don’t bother looking for downtown Portland’s oldest microbrewery, Tug Boat Brewing Company (founded in 1989), which closed in mid-2017, due to a never-ending saga of damage caused by businesses upstairs, apparently.

By the way, what is with the American puritan idea of having to be over 21 to even look at a brewery (or winery) website?? They’re legalising cannabis all over the place and the web is awash with pornography, but you might have to lie about your age to see a picture of a beer? Wineries in Georgia (the country) are adopting the same ridiculous idea, alas.

Food is a big deal here too – since 2012 Feast Portland has put on not only a huge annual food festival but also meals, classes and talks, and raises money to tackle child hunger. While there are lots of cafés, I spotted surprisingly few grocery stores downtown; but the Pine Street Market, opened in 2016, is a food hall in a historic (1886) building near the river – it has stalls with communal tables and more formal restaurants. I was also taken with the food stalls between Southwest Alder and Washington at 9th & 10th, including Ethiopian, Lebanese, Chinese and even a Russian-Vietnamese fusion offering, which I wouldn’t begin to know how to tackle. I also noticed quite a few Andean and Peruvian restaurants. I don’t like coffee, but that’s huge here too – the heart of Portland’s third-wave coffee culture is Stumptown, with various branches in town; its founder also owns the Woodsman Tavern, a log-cabin-style pub serving locally sourced food. Kingsland Kitchen, a British-owned brunch and sandwich place, opened in 2015 and is horribly meat-focussed but otherwise enjoyable enough, with fried eggs and toast from just $4 and a full English breakfast for $16. 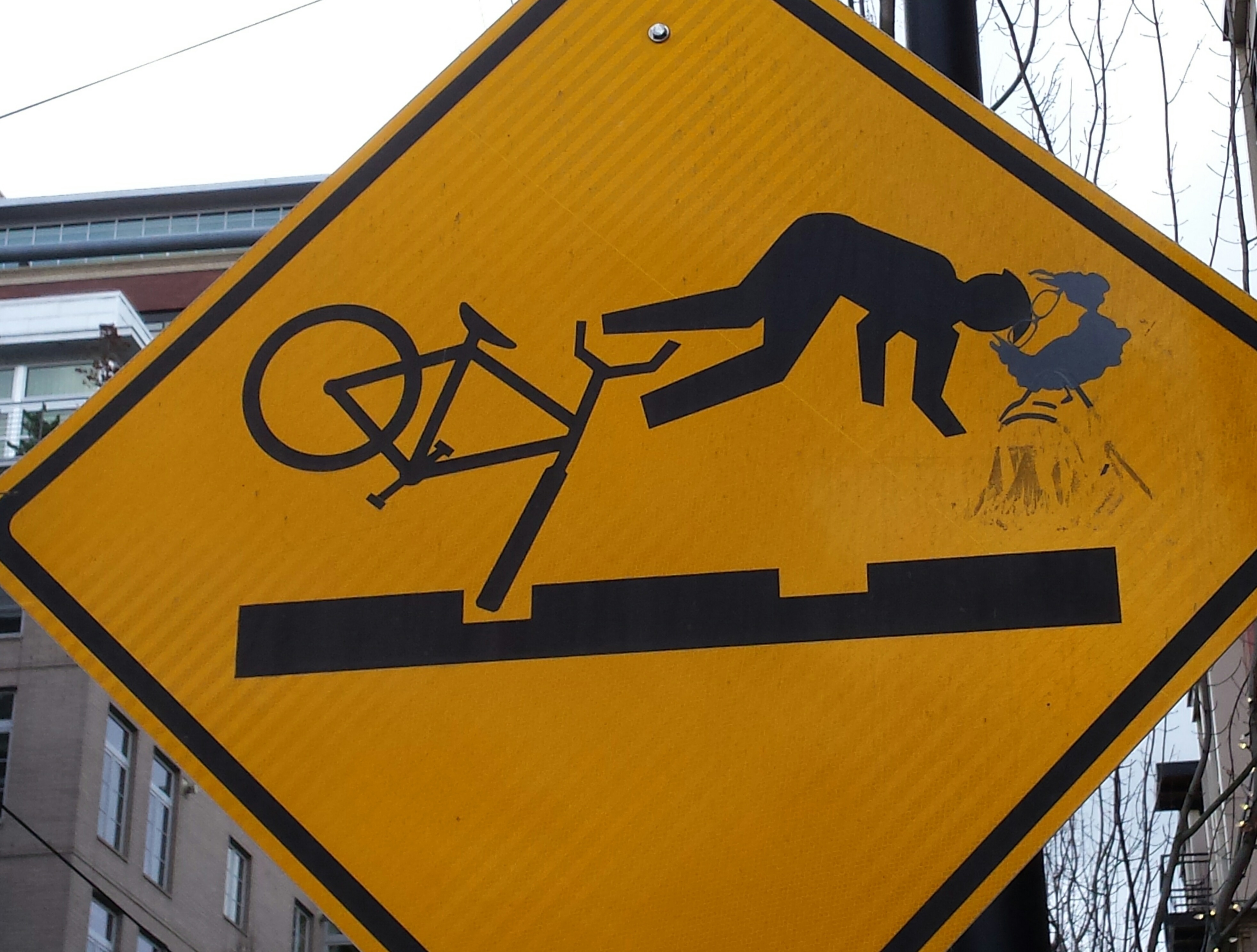 Art, indoors and out

There’s a lot of public art in Portland, thanks to a tax on new developments – usually this is a recipe for bad art, but most of what’s been produced here is not too cheesey. A lot of it is along the Transit Mall (Southwest 5th and 6th Avenues). For me, the most interesting public art is the stumps of two pillars that supported the Lovejoy Ramp, a road bridge across the rail yards, which have been preserved because of the murals painted on them by railway worker Tom Stefopoulos between 1948 and 1952 – they’re definitely worth tracking down on Northwest 10th Avenue between Everett and Flanders. There’s also The People’s Bike Library of Portland, at Southwest 13th and Burnside, which looks more like the city’s abandoned bikes piled up randomly. There’s quite a bit of real (really good) sculpture outside the Portland Art Museum, notably Roy Liechtenstein’s giant Brushstrokes (three swooshes, in a way) and some rough steel by Anthony Caro (there’s more by him inside).

Inside PAM (this is the dull bit), the collection starts with Greek bowls and kraters, funerary heads from Palmyra (c150-200 BCE) and Etruscan ceramics; then there’s a Nativity (1335) by Taddeo Gatto (Giotto’s closest disciple), a cut-out Christ on the cross by Botticelli (from his weaker late Savonarola-esque period), a few more from the Italian Renaissance, a Brueghel and a Cranach, then a graphic circumcision (prefiguring the Passion) by Jacob Cornelisz Van Oostsanen, the first notable painter in Amsterdam, who was new to me. I guessed that van Dyck’s calculating Cardinal Domenico Rivarola (c1624) was from Genoa (see my post from there), and I was right. There’s a representative range of mainly French 18th- and 19h-century art, by Fragonard, Greuze, Boucher, de Largilliere, Bougereau, Monticelli, Ziem, Diaz de la Peña, Corot, Daubigny, Millet, Courbet (a mirror image of himself as a cellist), and Alexandre Calame (1810-64), who lost an eye at 10 but became the leading Swiss landscape painter of the 19th century. Upstairs, there’s a striking modern portrait by Kehinde Willey on the landing, then American art, starting with Gilbert Stuart (a pupil of Benjamin West, the American-born co-founder of the Royal Academy), Thomas Sulley, Rembrandt Peale, Daniel Huntington, George Inness, Sargent, Albert Bierstadt (a rather exaggerated version of Mount Hood, which Portlanders can see in the distance), Childe Hassam (who visited Portland in 1904 and 1908) and then more radical art in the 20th century, by Julian Alden Weir, Robert Henri, John Sloan, Milton Avery and Moses Soyer, as well as Diego Rivera.

There’s a great blend of traditional and contemporary Native American art and a good little room on Mesoamerica and Peru, Chinese funerary goods from the Warring States period, and Japanese prints. Through the tunnel in the Mark Building there are Impressionist and Post-Impressionist paintings by Monet, Gauguin, Pissarro, Degas, Sisley, Renoir, van Gogh, van Rysselberghe, Cézanne, Utrillo, Vlaminck, Rouault, Derain and van Doesberg. There are also photos by Eugène Atget and Julia Margaret Cameron and sculptures by Rodin and Brâncuși, and then slightly later works by Kokoschka, Kirchner, Beckmann, Léger, Lipschitz, Gabriele Münter, Naum Gabo, Philip Guston, Osip Zadkine and Josef Albers. In the ground-floor lobby are sculptures by Hepworth, Moore, Archipenko, Hans Arp, Calder and Isamu Noguchi, and a polyurethane car by Claes Oldenburg. The more contemporary work on display includes Warhol, Stella, Kenneth Noland, Helen Frankenthaler, Judy Chicago, Don Judd, Dan Flavin, Basquiat and Kiefer; there’s glassware by Lalique, Tiffany and William Morris, and ceramics by Bernard Leach and Shoji Hamada. All in all, there’s a hint of collecting by numbers (we need one by him, one by her…) but the end result is certainly an impressively broad collection.