Heading southeast from Hannover, I visited Hildesheim, an historic city full of half-timbered houses (Fachwerkhäuse), then Wernigerode and Goslar, also known for their half-timbering, and the Harz mountains (hey, enough of the halliteration. Ed). It was my first time in this area and it was something of a revelation. Half-timbering here is not the cosy black-and-white of Cotswold cottages but a multicoloured riot up to six storeys high – most of those in Hildesheim were rebuilt after World War II, but Goslar and Wernigerode were pretty much untouched. (I found Hildesheim too easily confused with Helmstedt, not too far to the east, which used to be of passing interest as the last stop in West Germany on the rail and road routes towards West Berlin.) 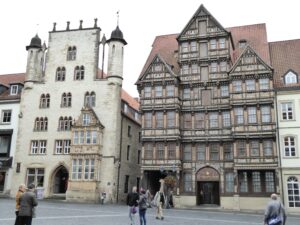 Hildesheim is on UNESCO’s World Heritage List, not because of the half- 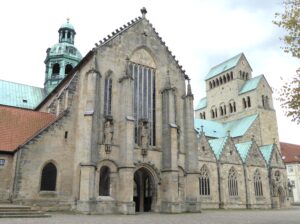 timbered houses on its beautifully reconstituted marketplace, but because of two fabulous Romanesque churches, the cathedral and the even more impressive St Michael’s. A bishopric was established here in 815 by the Holy Roman Emperor Louis the Pious, son of Charlemagne, and the cathedral was built in 852- 872 and rebuilt in 1010-20, after a fire in 1046, and after 1950. The wonderful cast bronze doors, depicting scenes of Adam and Eve (the Fall of Man) and the Life of Christ (the Salvation of 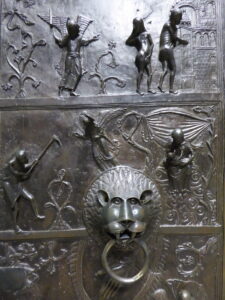 Man), were added in about 1015 by Bishop Bernward. There’s also a very unusual bronze column, with a spiral relief depicting the life of Christ – this was made for Bernward in about 1000, but for St Michael’s, and was moved to the cathedral in 1810 after the parish of St Michael’s was dissolved. In the crypt beneath the altar you can see the beautifully decorated St Godehard reliquary, but there are many more treasures in the Cathedral Museum on the south side of the cathedral and the cloister. In fact, for many the most famous treasure is the Thousand-Year-Old Rose (now over 1,200 years old), which seemed to have been 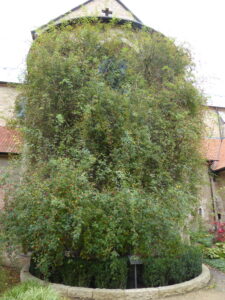 destroyed in the air raid of 22 March 1945 but was flowering again by 1947. Now it covers the full height of the outside of the east-end apse; signs seem to indicate that you need to go via the museum (and pay) to see it, but in fact there’s a perfectly legitimate way into the cloister near Bernward’s Column. In the centre of the cloister is the chapel of St Anne, the first Gothic building in Hildesheim (c.1320), which is bare and thus usually open. 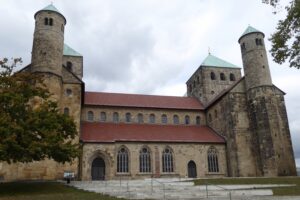 Despite all its treasures, the cathedral’s interior is not especially striking,
whereas St Michael’s should knock you over with its superb ceiling painted with the Tree of Jesse 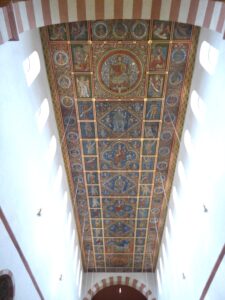 (Christ’s family tree). Built in 1010-33 on the site of a monastery founded by Bernward (who was buried in the crypt), it’s a great example of Ottonian Romanesque architecture, named after the Emperor Otto III, whose tutor Bernward was. Even after the Reformation, the Benedictines were allowed to continue worshipping in the crypt; this remains the case today, although in the nineteenth century the church was used as a hay store and then as part of a mental hospital housed in the monastery. It was almost derelict, and then was burnt down in the 1945 air raid (the ceiling and other treasures had been removed); the postwar reconstruction followed Bernward’s original design as far as possible.

Between the two churches, the Roemer- und Pelizaeus-Muzeum is a leading museum of global archeology and antiquities, with a particularly good collection of Egyptian relics, brought back by a banker who spent much of his career in Cairo, as well as Chinese porcelain and Peruvian artefacts. Another branch is the City Museum in the Knochenhauer- 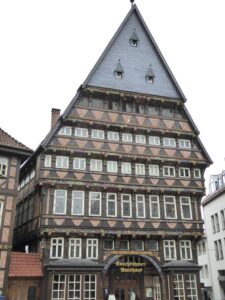 Amtshaus (the Butchers’ Guildhall), the largest of the rebuilt half-timbered houses on the Markt – you have to walk through a restaurant and go upstairs. There are good displays on the city’s history; captions are in German only (I did notice that the Hanseatic cities, and Berlin, are far more likely to have bilingual information), but nothing could be clearer than the construction of the Spitzboden or attic at the top.

There are many more rebuilt houses, some with elaborately decorated stone windows, in the centre, and other attractive churches; but the most authentic houses, untouched in the war, are to the south on Brühl, 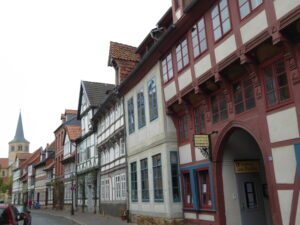 Godehardsplatz and Kesslerstrasse, finishing at the charming Masonic Hall (built in 1663, expanded in 1822, and restored in 2011). Also to the south is the basilica of St Godehard, also built in Romanesque style in 1133-72, which has a striking setting but a fairly plain interior, apart from a nineteenth-century fresco in the choir; however there’s talk of it being added to the World Heritage List.

Moving on to the Harz Mountains, my jumping-off point was 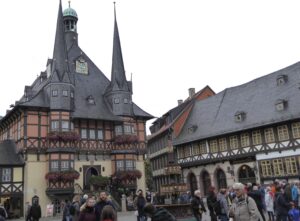 Wernigerode, a small town in Saxony-Anhalt (just over the border into what was the German Democratic Republic) which is also known for its half-timbered houses. To be honest I didn’t much like it – it was very crowded, on a Saturday, seemingly with coach parties from Berlin, and it felt a bit tacky to me. Having said that, there are some quieter, unspoilt corners with half-timbered houses from the fifteenth and sixteenth centuries.

It’s the northern end of the Harzer Schmalspur Bahnen or Harz Narrow-gauge Railways, which run through the mountains linking the towns of 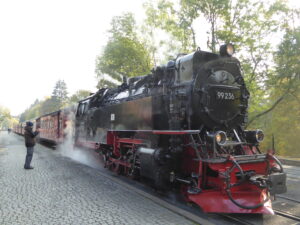 Wernigerode, Nordhausen and Quedlinburg with 140km of metre-gauge track. Some new links have been built to create a functional public-transport system, but it’s best known abroad for the branch to the top of the Brocken (1141m), the highest peak of the Harz, and for the surprisingly powerful steam locomotives that operate many of its trains. These are mostly 2-10-2T tank engines, built in the 1950s, although pre- 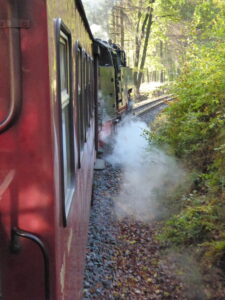 war steam locomotives and indeed diesel railcars can appear for special events; there’s plenty of specialist rail-fan coverage of the trains, so suffice to say that I had no problem taking my folding bike up  to the Brocken. It did seem odd that because of the pandemic the HSB was not taking online bookings, which is surely the wrong way round. The ride up through the beech forest was great, but at higher levels, the conifer forests have seen a lot of logging; the summit is above the tree line and lived up to its reputation for bad weather, with fog and a cold wind. 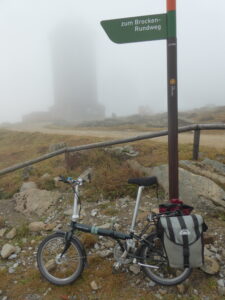 witches (as in Goethe’s Faust), and Goethe and the poet Heinrich Heine came here (as well as Peter the Great of Russia, supposedly) and have trails named after them. Another aspect of the local folklore is the Brocken spectre, the huge shadow of a person cast on a cloud, with the head often ringed by a rainbow halo, which was first described here in 1780. After World War II, the border between East and West Germany ended up about two kilometres to the west, the entire border strip became a closed area which has turned out to be a great boon for wildlife, and the summit of the Brocken was a base for electronic spying on the West. Since the fall of communism, and the reopening of the Brockenbahn in 1991, it has become 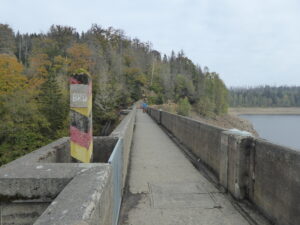 a popular tourist destination again. I cycled down, on a concrete track at first, but then on paths that were too rough to ride on (first with stone, then with roots) as I came around the Eckertal reservoir to the dam, straddling the former border. From here it was a quick run down to the attractive spa town of Bad Harzburg, and then across to Goslar. 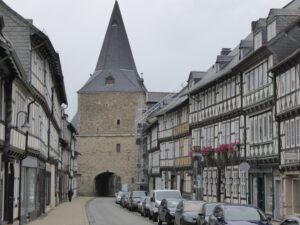 Rough Guide to Europe, supposedly stranded at the end of a railway southeast from Hannover – but the matching text had been cut. With my experience of brutal cutting by the Rough Guides editors, I was fairly sure that it would actually be a nice place and well worth a visit. And so it proved. I don’t know if it’s true or fair, but in Wernigerode I had a sense that I was only seeing Ossies from the former East Berlin visiting the same places they’d visited when it was East Germany, much like people who only ever go to Blackpool; there was none of that in Goslar, which felt more open. 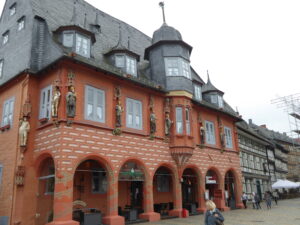 It’s another place that’s on UNESCO’s World Heritage List, not just because of the historic townscape, with perhaps 1800 historic houses, but also for the Rammelsberg mine and the Upper Harz Water Management System, in the hills to the south – created by medieval monks, this was massively expanded from the sixteenth to the nineteenth centuries to hold water and channel to the mines (see below).

Metal ores were mined in the Harz from the third century AD, and in about 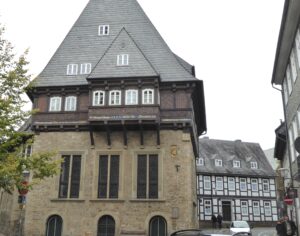 968 the Emperor Otto the Great opened a silver mine at Rammelsberg; the settlement of Goslar, a couple of kilometres north, was first mentioned in 979. In 1005, Henry II built an Imperial Palace (Kaiserpfalz), rebuilt by Conrad II from 1025, which became one of the main power bases of the Saxon rulers until 1250. After this, Goslar became a Free Imperial City, a member of the Hanseatic League, and immensely wealthy thanks to its mines (Gose, a sour wheat beer, was also developed here, although it’s been associated with Leipzig for the last couple of centuries). The town then became a bit of a backwater as part of Prussia; hunkered down here in the cold winter of 1798 Wordsworth began writing The Prelude, and the cathedral was demolished in 1820 (only the north porch survives, as the chapel of St. Simon and St. Jude, across the park from the Kaiserpfalz). Goslar escaped bombing in World War II, so many half-timbered wooden houses survive here, along with several attractive churches. 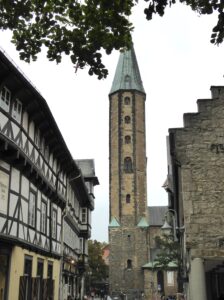 The main church now is the Marktkirche, just off the market square; built in 1151 as a Romanesque basilica with three naves, a smaller version of the cathedral; a Gothic choir was added in 1295, and it was widened to five naves in 1334-6. Inside, it’s worth seeing the stained-glass windows, the remains of a mural (circa 1440) , a bronze font (1573) and a pulpit carved with biblical scenes (1659); and there are great views from the north tower. The market square is also lovely, with the Rathaus on the west side of the square worth visiting to see the stained-glass windows and the frescoes in the Huldigungssaal (Hall of Homage); when I was there it was closed while a new World Heritage information centre was being fitted out for opening in spring 2021 (pandemic permitting) – at which point the tourist information centre on the east side of the square will presumably close. 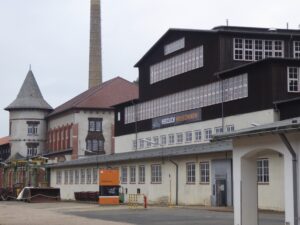 The Rammelsberg mine closed in 1988, after about 1,020 years of activity – initially copper ore was the main output, followed by lead, zinc and above all silver. The buildings were saved from demolition and turned into a museum, and it became part of the World Heritage Site created in 1992. The mine had been expanded by the Nazis and most of the surface buildings date from this period; as well as technical exhibits, there are displays on the mine’s cultural history and a modern art gallery, plus a range of underground tours, including a twelfth-century gallery and one on a mine train.

In the mountains to the south, the Clausthal ponds were created in about 1318 to provide water to drive waterwheels and pumps for these and other mines; sixty of the original 107 are still managed, as part of the Upper Harz Water Management System sector of the World Heritage Site (added in 2010). Walking routes have been created along many of the water channels, and tours can be arranged from the Upper Harz Mining Museum in Clausthal-Zellerfeld. This sector also includes the Walkenried monastery, which dates from 1127, when Cistercian monks came from France, bringing the Gothic style of building to northern Europe; the abbey church itself, dating from the thirteenth to fifteenth centuries, is in ruins, but other buildings can be visited, including a museum and the chapter house, now used as a parish church.

This is another place where I have unfinished business, to enjoy the towns of Hildesheim and Goslar in non-pandemic times, and to spend more time hiking and cycling in the Harz.