One of my favourite books on Nepal, A Glimpse of Eternal Snows, has appeared in an audio version, read by the author Jane Wilson-Howarth herself. It’s a beautiful evocation of a little-visited part of Nepal, the lowlands of the western Terai near the Indian border, but it’s also the moving story of the short life of Jane and Simon’s son David, and an enquiry into the limits of modern medicine. 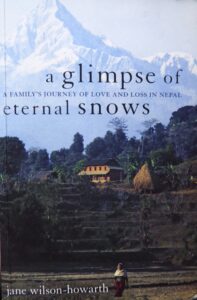 Jane (and Simon) and I both have our British bases in Cambridge, and of course we use the same hospital! I first met her when she was Bradt Travel Guides’ house doctor, providing medical text for some of my early books. She actually started out as a biologist, obsessed with creepy-crawlies, and then transitioned to medicine; she’s had a busy career since then working on health projects in the Global South (while Simon does irrigation work). At the same time she’s been writing about travel health, travelling with children and other topics – notable titles included Shitting Pretty and Bugs, Bites and Bowels (although their titles were later boringly watered down to How to Shit Around the World and The Essential Guide to Travel Heath). However, having been the travel health columnist at Wanderlust magazine since it first appeared in 1993, she was dropped by them in March 2022 (apparently they’d been wanting increasingly dumbed-down material anyway). Not a problem, as she has other interesting ventures afoot – she’s publishing a series of ‘Alex and James eco-adventures in Nepal’, Himalayan Kidnap, Himalayan Hideout and most recently Himalayan Heist, children’s adventure stories with a strong ecological angle (also based on her family, though perhaps not on real events). These and other books are being issued in electronic and audio formats, and are well worth looking out in whatever format suits you. (She’s also written about Madagascar, which, alas, I know nothing about.)

The events described in A Glimpse of Eternal Snows took place in 1993-96, and the book took ten years to write, plus a bit longer to find a publisher, so she is partly looking back at her younger self. In 2014 she also published Snowfed Waters, a novel based on the same period living in the Terai. The backbone of A Glimpse of Eternal Snows (and you have to get to the end of the book to see the irony in the title) is the story of the short life of their disabled son David, with dreadful experiences of the medical machine in an English teaching hospital, with non-empathetic Clever Doctors who could only see him as an Interesting Case, and the happy life he was able to have once they reached Nepal, despite all its well-described challenges. But there’s much more to the book, with warm insights into the rest of the family, some very different Nepali characters and various expats too – her behind-the-scenes insight into development work is also valuable. There are descriptions of several hiking trips into the hills too – she has a great eye for nature, not just the wildlife but also the piles of shit that lie in wait everywhere (and she’s not afraid of the s-word!).

I’ve also happened recently to read Into Thin Air – not the famous one by Jon Krakauer about disasters on Everest, but an older one by John Pilkington. I vaguely know Pilks, and I used his excellent An Englishman in Patagonia where I was first working in that part of the world. His Into Thin Air is about a trek in 1982 in western Nepal, not the Terai but real hills to the north, bisected by immense valleys. As he wrote, ‘The road west from Kathmandu ends after 150 miles, just beyond Pokhara, by the side of a lake. This lake, Phewa Tal, marks the termination of motor cars, electricity, hospitals, pizza – in fact all the elements of civilised life. Beyond Phewa Tal you enter another century, and you, of course, enter it on foot.’ He had some learning experiences along the way, but – of course – made it all the way across to the Indian border. Even today this area sees few foreign visitors, but this book would still be a useful introduction if you fancied a trek there. It’s entertaining, with excellent descriptions of both people and landscapes. 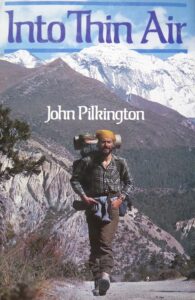 For some years I was a trustee of Rural Assistance Nepal, which mainly supported nurses and teachers in remote villages, as well as village homestay projects. The charity no longer exists, but its founder Marianne is still working on community homestays, which ties in very well with the background focus of my career as a guidebook writer, trying to shift tourism from big hotels owned by big companies to local accommodation in less crowded places.

At the moment she’s exploring the Taplejung area, north of Gorkha, and Phaleung, in the far east with great views of Kanchenjunga. This reminds me of the trek to Sandephu (or Sandakphu), also with wonderful views of Kanchenjunga, which I did from Darjeeling in India back in 1983 (my first real mountain hiking). Marianne (who also did it from Darjeeling in 2005) tells me that there’s now a trek from the Phaleung side too. 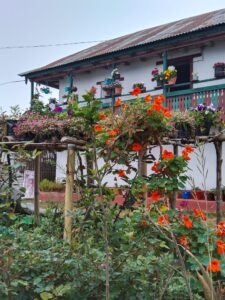 And finally, quite by chance, passenger train services started a few days ago from Jayanagar in the Indian state of Bihar to Janakpur and Kurtha in Nepal – it’s not quite the first railway in Nepal, but the others have never been much use or lasted very long. This line should be extended within the next few years to Bijalpura and then Bardibas, on the East-West Highway, at which point it might actually be of interest to more than local travellers. (The very slow construction of the East-West Highway features in A Glimpse of Eternal Snows, as it happens.)

One thought on “A few notes on Nepal”