The morning of the day that we arrived in Tangier (aka Tanger or Tangiers) I’d finished reading Tahir Shah’s delightful The Caliph’s House. It’s set in Casablanca, but he mentions his grandfather living in Tangier around 1960 – exactly when my own grandparents (or more precisely my father’s mother and stepfather) were living there and running a small hotel, Los Tres Pelicanos, which we couldn’t find any trace of. They did bring back a set of signed Paul Bowles novels, so they were presumably more in the arty set than the retired colonial gentry crowd to which my grandmother might have gravitated, having lived in colonial India.

Epitomising ‘faded glory’ – the Hotel Continental, in the medina with many rooms facing the sea, is one of the city’s oldest hotels. Past guests include Winston Churchill, Paul Bowles, Jack Kerouac and the Rolling Stones to name but a few, and Bertolucci set some of the scenes for The Sheltering Sky here too. There’s a large terrace where one takes breakfast overlooking the port and a vast Aladdin’s cave of a gift shop which may not have been dusted for decades. Why else would you stay here? Certainly not for the fairly basic and unremarkable rooms. If you struggle with stairs the lack of a lift may present a problem too and the service is nothing special. On the other hand, it’s an ‘experience’ worthy of a couple of nights. It’s very cheap and clean and although it is billed as an alcohol-free environment, when Tim and I decided to eat dinner there, the waiter nevertheless managed to rustle up a perfectly acceptable bottle of Moroccan rosé. I’m not going to describe the public interiors, and recommend you explore these yourselves whether or not you decide to sleep over.

Follow in the footsteps of Matisse at the recently renovated Villa de France, where in 1912 he painted Window at Tangier. The view from the hotel is not unchanged but it’s fun to ask at the front desk to be shown the room itself, and if unoccupied, you will be escorted there for a few minutes to take in the scene and spot the differences. There is no charge for this as you are basically looking at a hotel room, but a small tip won’t go amiss.

My grandparents would have known the delightfully old-world Hotel Continental where we stayed, the then British consulate which now houses the Museum of Contemporary Art (hosting interesting temporary shows; closed Mondays), and the very grand Grand Hotel Villa de France, which reopened in 2014 after years of closure. Matisse stayed here in 1912-3, in room 35, which has been kept as a shrine to the great painter. Of the many paintings created here the most famous perhaps is his Landscape Viewed from a Window (now in Moscow’s Pushkin Museum), but the trees are much higher now than they were then and it’s hard to clearly see the Anglican church of St Andrew, which was the focal point of Matisse’s painting. 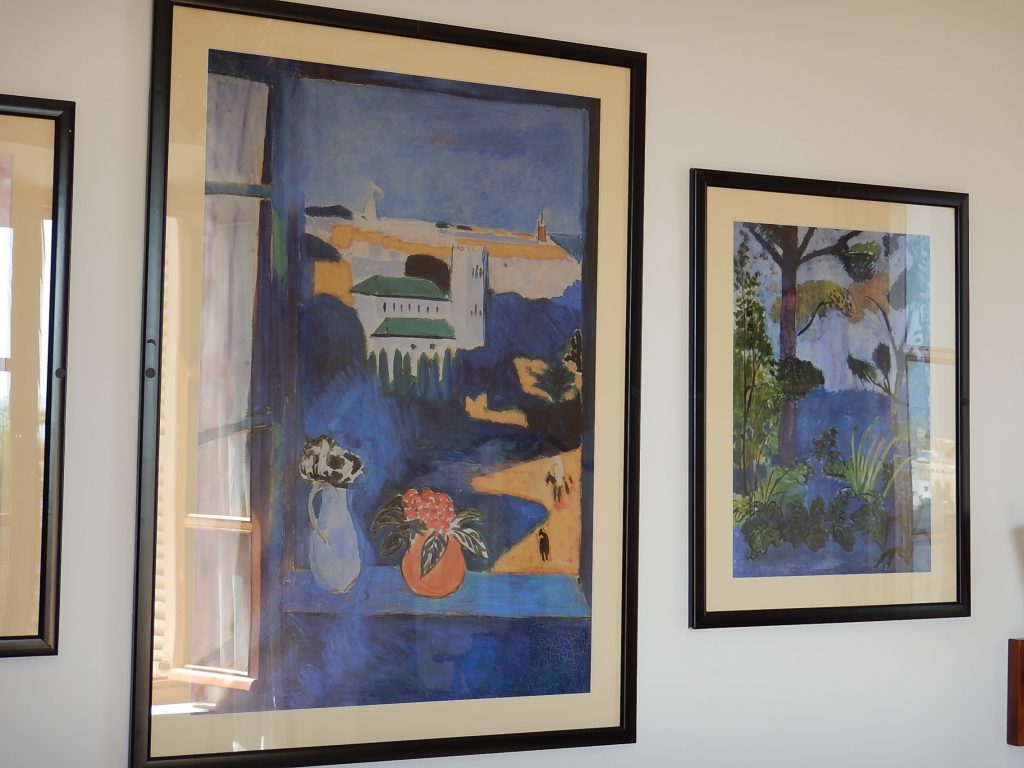 Naturally we went to the church (it can take a bit of banging on the gate to gain access), where Yassine the caretaker was very helpful but there was no record of my grandparents, although they definitely supported the church. We also met the new priest, who after about 17 years as chaplain to the British embassy in Moscow was sent here for a year to try to fix the divide between millionnaire expats and the subSaharan migrant Anglicans asking them for money. A tough job!

Consecrated in 1905, the church is known for its Islamic-style décor (including the Lord’s Prayer in Arabic script around the chancel arch), and for the luxuriant churchyard housing the graves of various notable expats, as well as the odd tortoise.

Of course the French cultural imprint is far stronger than the Anglophone one – in particular we noticed the strong arty publishing scene with bookshops selling literary pamphlets etc in French.

Our guidebook has trains terminating at Moghougha or Morora (about 5km south, just off the N2) and CTM buses at Tanger-Ville station by the harbour. Both are wrong – in fact trains now continue to the ‘new’ Tanger-Ville station by the waterfront 2km east of the centre, while the CTM bus station is at Moghougha (Dh80 by grand taxi – our driver complained that were ‘lots of constrictions’ meaning construction). Morocco’s TGV high-speed railway opens in 2018 (the trains are waiting in its depot at, where else, Moghougha), but Moroccan rail and bus terminals are not planned by anyone who actually uses public transport, so it will probably take the best part of an hour to get to the TGV station for the two-hour trip to Casablanca. Likewise, the ferries to Spain are being moved from the old harbour of Tanger to the new port of Tanger-Med, 45km east – highly inconvenient for public transport users, although there is a railway and a shuttle bus.

Our credit cards didn’t work at ticket machines in the railway stations, so expect to queue to pay cash. Taxis are often the only way to get around, both in towns and between them, and our drivers were all pretty good and safe.

We were pleased that trains and long-distance CTM buses were non-smoking and pretty civilised – although the buses didn’t have a toilet or wifi and (mercifully) the TV was off as well. I was glad not to be driving as I couldn’t work out who had priority at roundabouts.

As for languages, we speak French, but it was noticeable that English was more popular with younger people than the language of the colonial oppressor.

What we read in Morocco

As well as being amazed by how much better the 1993 Rough Guide to Morocco was than current equivalents (and amazingly, the prices listed were still more or less correct!), we also enjoyed a couple of books set in contemporary Morocco. Secret Son by Laila Lailani (Algonquin Books/Penguin), written by a Rabat woman now married and living in the US, is the tightly woven tragedy of a young man born in a Casablanca slum who makes it to university but finds that everything in his life betrays him. The Caliph’s House is by Tahir Shah, sitting in the line of British authors who set up home abroad (Peter Mayle, Chris Stewart) and have exotic encounters with local builders and the like – but his encounters are far more exotic, and not just with humans! It turns out he went to the same school as me, but that’s not important. John Hopkins’ The Tangiers Diaries (1997; Tauris 2015) covers the period from 1962 to 1979 (about Marrakech as much as Tangier). It’s by the Tangier literary figure you’ve never heard of, but he does offer enjoyable insights into unspoilt Morocco and the circle around Paul Bowles.