Having spent a few weeks in the Hanseatic ports of Bremen and Hamburg and then on the Danish and Swedish sides of the Øresund and Kattegat, the funnel through which trade between the Baltic and the North Sea has to pass, it was good to get to Lübeck, the closest thing to a capital of the Hanseatic League, and to learn about its history. I wasn’t actually aware of the European Hanse Museum, which opened in 2015, and I’d also forgotten just how lovely the town is and how much more there is to see here – one night was not enough and I shall certainly have to return.

Actually getting in to the museum is quite complicated, even without Covid-19, with their over-reliance on QR codes, a touch pen and earphones, and entries every two minutes via an automated lift – although this was a response to the medieval stonework discovered during construction of the museum, and not part of the original scheme. Once through the first rather dark spaces, there’s an excellent museum that makes good use of the technology to allow you to see lots of added information if you want. Merchants from these towns on the south side of the Baltic began trading from the twelfth century, roving as far as Italy, Malta and Crete, and then eastwards to Novgorod in Russia; from the fourteenth century they were known as the Hanse, with over a hundred towns linked by their use of the Low (Middle) German language, centred on Lübeck. It was also Lübeck’s measures that became standard. By the sixteenth century they’d established kantors or collective trading posts in Novgorod, Bruges, London and Bergen, with smaller ones in Boston, Lynn, Bourgneuf-en-Retz, La Rochelle, Pskov and Kaunas.

The museum has interactive reproductions of trading posts, and focusses particularly on Novgorod, which was immensely important because of the fur trade and also its access to the Silk Route; the trade had been opened up by merchants from the island of Gotland, but from the early fourteenth century it had been taken over by the Hanseatic towns (there’s also good coverage of the developments in shipbuilding that allowed this). Convoys left twice a year from Visby (in Gotland), having elected a leader, and transferred their goods to local lighters for the river passage to Novgorord. The merchants spent either the summer or the winter there (the river being frozen from October to April), bartering cloth, silverware, weapons and other metal products for furs, wax and honey; the kuna or marten pelt was the notional unit of exchange. (The kuna is still the unit of currency of Croatia, as this was on another fur trading route.) Meanwhile the Hudson’s Bay Company was using the ‘Made Beaver’ (dried for a year) as its unit of exchange, so this was quite familiar to a Canadian.

A less exotic but equally profitable trade was in salt to Skåne (Scania, the southern region of what is now Sweden), exchanged for herrings which were in great demand across Europe for Catholic fast days. I’d come across reminders of the herring trade in Denmark and Malmö over the previous couple of weeks. There’s also a room on Bruges, which was the exchange point for spices and exotic fruits coming by ship from the Mediterranean (we think of Bruges as an inland town now, but it was a major port at the time). And there’s coverage of the history of Lübeck itself, and of the museum site – when you finish in the modern museum, you can go up behind to the remains of the Castle Friary, built on the site of what may have originally been a Slav fortress in the eighth century and then a Dominican friary and almshouse from 1227. It was converted to law courts in 1894, and on the lower level you’ll also see the early fourteenth-century chapter house and infirmary (which had underfloor heating, impressively enough).

The old town of Lübeck, famed for the finest Brick Gothic architecture in Germany, is a World Heritage Site; however much of it was destroyed in World War II (the raid of March 1942 was the RAF’s first major success in attacking Germany) and very carefully rebuilt afterwards. The area of the Market Square in particular was heavily damaged and there are now modern buildings on three sides and the superb Rathaus (City Hall) complex on the fourth side; dating from 1230-40, it was expanded in the next two centuries and in the sixteenth century the wooden oriel window and the external stairs were added, along with the splendid Kriegstubenbau or War Office. To the north, the long thin Chancellery extends all the way to Mengstrasse (where the gable façade was added in 1791), past the Marienkirche or church of St Mary, the city’s largest and most dominant although not its cathedral. Built between 1251 and 1350, it was the first church in the Hanse area in the Brick Gothic style and was much copied (for instance in Lund). However none of the copies matched the height of the Marienkirche’s nave, the world’s highest brick vault at 38.5 metres.

The great organ was built in 1518, destroyed in 1942 and replaced in 1968; Dietrich Buxtehude, who was the organist here for 39 years (and is buried here), was famed as one of Germany’s leading composers. Budding composers such as Telemann and Handel visited him here, and in October 1705 the twenty-year-old Johann Sebastian Bach walked almost 400km from Arnstadt to Lübeck to hear Buxtehude, then 68 years old, play. He took a month’s leave but stayed for three (by the time he’d walked home it was almost four), playing the organ, studying and copying scores – a hugely important experience for him. In 2017 the writer Horatio Clare recreated Bach’s epic walk, producing a wonderfully evocative series of soundscapes for BBC Radio 3, which alas are not currently available online (I’ll see what can be done about that) – but you can read his article in the Guardian, which focuses on the Brocken, the highest point of the Harz Mountains, which I visited a few days after leaving Lübeck, but which I’m sure Bach would have managed to avoid. There’s little doubt that from Lüneburg he would have followed the Old Salt Road to Lübeck, which ties in nicely with the Hanseatic League and the Danish/Swedish herring trade. 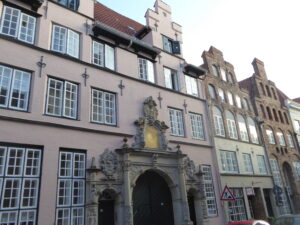 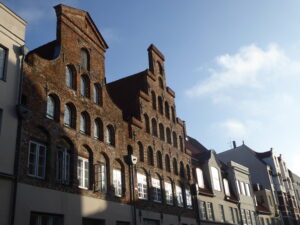 The World Heritage site’s Koberg zone, centred on the Jakobikirche (Church of St James) and Heiligen-Geist-Hospital (Holy Ghost Hospital), just north of the Marienkirche, also protects the whole of the eastern half of the old city, with street upon street of beautiful eighteenth-century houses. Three of these now house the Buddenbrooks House Literary Museum, the Günter Grass-House, and the Willy-Brandt-House. The first  is dedicated to the writers Thomas and Heinrich Mann, born here, the second to the writer Günter Grass, who was not born here but lived much of his life here, and the third to the politician Willy Brandt, born here as Herbert Frahm; the Brandt Museum is free, the others not too pricey (and likewise the Marienkirche). It’s pretty astonishing for a fairly small city to have produced three Nobel Prize winners. The Buddenbrooks House is closed for a major refurb until 2023, but there are temporary displays at the Behnhaus (Königstrasse 9) and the Infocenter (Am Markt 15).

The Jakobikirche, consecrated in 1334, was not too badly damaged in World War II, and its organ (dating from 1467/1637) is one of the few in the world with most of its original Gothic and Renaissance pipework – it popped up on Radio 3 just the other day. The Heiligen Geist Hospital, dating from 1260-86, is a fine red-brick structure with beautiful murals – it’s well worth popping in to the main hall (free) even if you don’t want the full tour. Not far south is the Museumskirche St Katherinen (Museum Church of St Catherine), built around 1300 in Brick Gothic style (of course) and now an art museum housing modern sculptures as well as paintings by Tintoretto (The Raising of Lazarus, 1576) and Sir Godfrey Kneller, generally thought of as an English court painter but in fact born Gottfried Kniller in Lübeck in 1646. The two-storey choir and fourteenth-century stalls are worth a look, and on the façade are figures by Ernst Barlach (1930-33) and Gerhard Marcks (1947-48).

Further south, just beyond the relatively small red-brick Aegidienkirche (church of St Giles), is the St. Anne’s Museum Quarter, formed in 2013 with the merging of a cultural history museum and an art gallery (in the late-Gothic St Anne’s Priory, built in 1502-15), along with a new children’s museum and a café (how they love their museum cafés in northern Europe!).

The third of the World Heritage site’s zones covers the southwestern corner of the old city, from the Petrikirche (church of St Peter) to the Dom (cathedral) to the south; it also includes the Holstentor, the city’s iconic fifteenth-century gate, to the west of the city moat. The largely Gothic Petrikirche was virtually destroyed during World War II then reconstructed, with a lift added to reach the city’s best viewpoint. The Lutheran cathedral was founded in 1173, consecrated in 1247, and more or less completed in 1341 when the Gothic choir was finished; it’s big and fairly bare, but there are quite a few folding altarpieces on display, although the most famous, by Hans Memling, is now in the St. Anne’s Museum. The Paradise porch (1241-59), on the exterior of the north nave, is a wonderful display of medieval stone carving.

Marzipan is said to have been invented in Lübeck, although in reality it was just an improvement of an existing (possibly Turkish) product – almonds don’t actually grow anywhere near Lübeck, but the Hanseatic merchants were a reliable source. Lübeck marzipan still contains more almonds and less sugar than is normal elsewhere, and one of the leading manufacturers has a free museum and a café.

There was some interesting news coverage recently in Britain about Anja Thauer, born in Lübeck in 1945, who was a sort of German parallel to Jacqueline du Pré, two exciting young cellists who studied together at the Paris Conservatoire, and whose careers both ended tragically in October 1973, when de Pré was diagnosed with MS and Thauer committed suicide after an affair with a married man was broken off. Now her recordings are being rediscovered, and changing hands for considerable sums – the evidence seems to be that she was good, but not as good, or as exciting, as du Pré.

2 thoughts on “Lübeck – the Hanse, Brick Gothic and Bach”