In the autumn of 2020 I was in Goslar, in the northern half of Germany, where the Water Management System of the Rammelsberg mines is on UNESCO’s World Heritage List. A year later I was in Augsburg, in southern Germany, where another Water Management System is also on the WHL, and it’s even more impressive. The city itself is also attractive and well worth a stopover.

To begin at the beginning, Augsburg was founded (as Augusta Vindelicorum) by the Romans in 15 BC, making it Germany’s third oldest city, after Neuss and Trier, and became the capital of the province of Raetia (nowadays associated more with southern Switzerland’s Rhaetian Railway). It lay on the Via Claudia Augusta, a major trading route north over the Alps (via the Reschen Pass) to the Danube at Donauwörth (about 30km north of Augsburg). As it happens, in 2021 I also went to Augusta Pretoria (Aosta), Augusta Taurinerum (Torino) and Augustodurum (Bayeux). In late/post-Roman times it was sacked several times by marauding armies but survived as a trading centre and became a Free Imperial City in 1276 – its leading merchants became immensely wealthy as bankers, financing kings and popes as well as their own forestry and mining businesses. The city’s peak came in the fifteenth and sixteenth centuries, when it produced large quantities of textiles and metalwork, notably armour, scientific instruments and fine gold- and silverwork; it was also a major centre of the new printing industry.

As a free city it was able to turn Lutheran, to the displeasure of its bishop, and became a base for Protestant artists such as the Holbein family. Luther was questioned by the papal legate Cardinal Cajetan at the Diet of Augsburg in 1518, and the primary confession of faith of the Lutheran Church was presented to the Holy Roman Emperor at the Diet of 1530, and is thus known as the Augsburg Confession. In 1555 the Peace of Augsburg protected the rights of religious minorities in imperial cities, and a mixed Catholic–Protestant city council then presided over a mainly Protestant population. However during the Thirty Years War the city, occupied by the army of Gustavus Adolphus of Sweden, was besieged by Catholic troops and in the winter of 1634/5 thousands died from hunger and disease – the city’s population fell from about 70,000 to about 16,000. In 1806 Napoleon dissolved the Holy Roman Empire and attached Augsburg to the Kingdom of Bavaria, which eventually formed part of modern Germany. During the Second World War factories in Augsburg produced Messerschmidt planes and engines for U-boats, and the city was repeatedly bombed. Since then it was developed as an attractive and sustainable city, winning the Entente Florale award for Europe’s greenest and most liveable city in 1997.

And so to the Water Management System – the Augsburg Western Woods (now a 1,175 square kilometre Nature Park) and the River Lech to the east of the city both provide a plentiful supply of fresh water, but the clever thing was that from 1545 (long before there was any real understanding of waterborne diseases) drinking water and process (ie industrial and sewage) water were separated in a complex system of channels that cross over each other in places. These fed the three complexes of water towers (the first dating from 1416), over a hundred fountains, and various power stations that originally drove cotton mills but now produce electricity. Most of these have been well preserved and can be visited from time to time – there isn’t one museum to give an overview, but the website gives an overview of what can be seen. In the city centre, the Augustus, Mercury and Hercules Fountains (1594-1602) still proudly gush forth (although the supply was switched from springs to groundwater from 1879), and there are over 500 bridges in all over the canals that wind through the city. (Not to mention the Eiskanal, some distance south of the centre, which was dug in 1647 to divert ice from the waterworks and was transformed into the world’s first artificial whitewater kayak course for the 1972 Munich Olympics – I have a friend who spent at least one summer camped out there.) And don’t miss the Stadtmetzg (City Butchers), built over a canal that cooled the building and also carried away waste – it was built in 1609 by Elias Holl, the city architect who was responsible for many late Renaissance masterpieces across the city, including the City Hall and the nearby Perlachturm, the Zeughaus (Arsenal) and the Heilig-Geist-Spital. 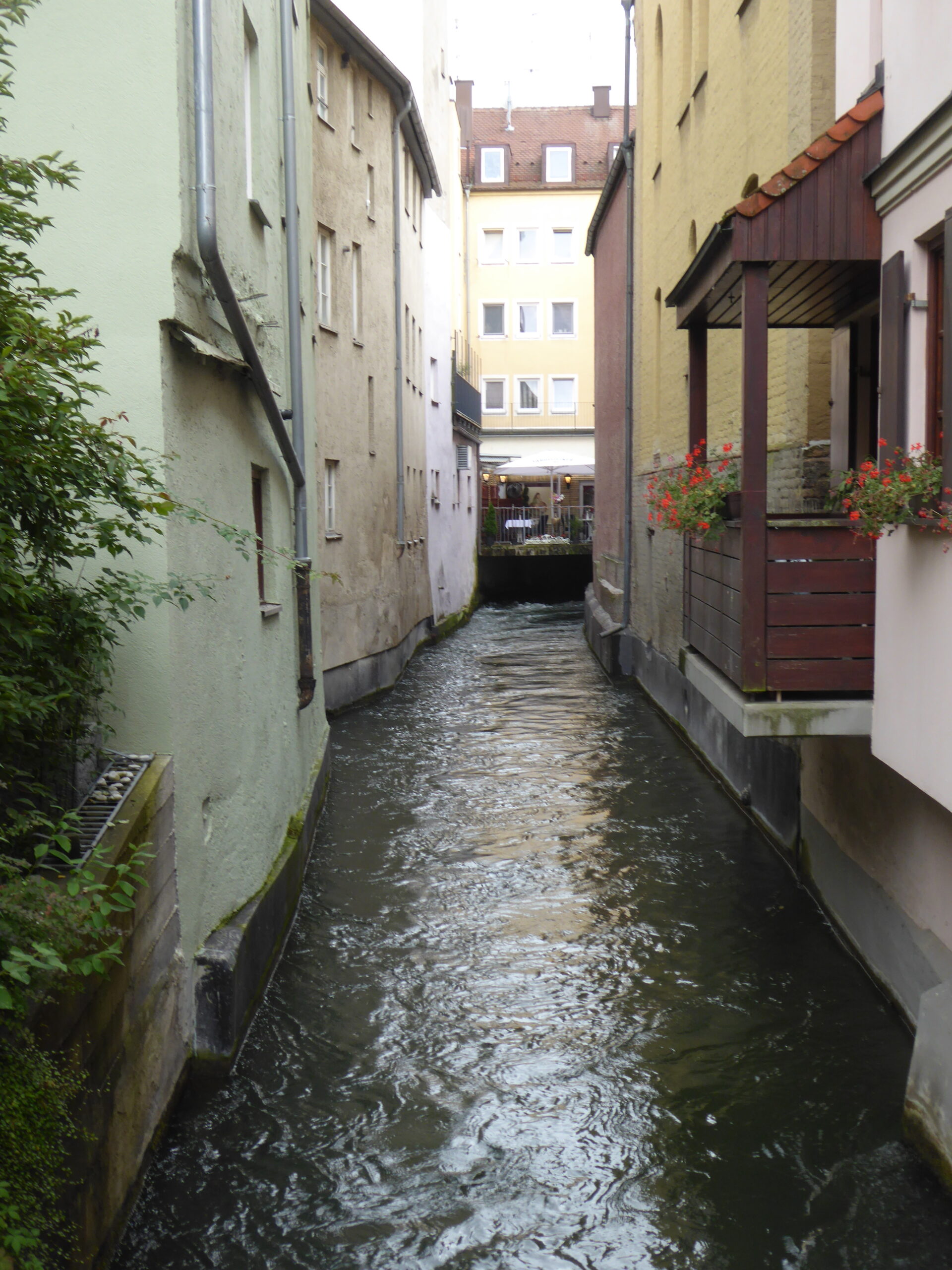 You should pop in to Elias Holl’s immense City Hall (and pay at a Ticketautomat) to see the Golden Hall, a huge space (32.5 metres by 17.5 metres and 14 metres high) that is covered with breathtakingly ornate decoration (lots of gold). Created from 1615, it was rebuilt by 1955 and refurbished between 1985 (the city’s 2,000th anniversary) and 1996.

Augsburg’s other key sight is the Fuggerei, the world’s first social or charitable housing – it was founded in 1513 (with the first residents moving in from 1519) by Jakob Fugger the Rich, the city’s leading businessman and banker, whose original idea was to give people who fell on hard times but were still able to work the chance to live in dignity and be part of society – the rent was always low, just one Rhenish guilder (now equivalent to just €0.88) plus the obligation to say three (Catholic) prayers daily for the souls of the Fuggers. By 1523 the enclosed enclave consisted of 52 two-storey houses, with a church added in 1582; the Fuggerei was extensively damaged in two air raids in 1944, then rebuilt and extended by a third – by 1973 there were 67 houses with 140 living units (each has its own private door from outside, and its own chimney). In recent years the age profile of residents has changed from about 80% retired people to about two-thirds, with more able to work, as originally intended; there’s also an increasing number of single women, reflecting social changes and the rise in divorces.

Carved sections of stonework from bombed patrician houses elsewhere in the city were incorporated in the rebuilt Seniority Committee Building, near the entrance to the Fuggerei, the seat of the rather patriarchal management, which is still chaired by Gräfin Thun-Fugger and draws its income from the forests owned by the family since medieval times.

It’s well worth visiting (info here), with a museum at Mittlere Gasse 14 (where Franz Mozart, great-grandfather of the composer, lived), as well as a typical apartment at Ochsengasse 51 and in an air-raid bunker. You can also refuel at the Fuggerei-Stube, next to the entrance, and from June to October also outdoors in the Markusplätzle.

The cityscape is delightful, with wide streets and the above-mentioned fountains, canals and water-towers, fine merchants’ houses and many churches – the cathedral is, surprisingly, a little way to the north of the centre and easy to miss (the bombers largely missed it too, happily), but it’s worth a look. Founded in the ninth century, it’s a largely Romanesque structure (1043-65, with two towers added in 1075), with Gothic additions between 1331 and 1431, including the east end and the southern and northern portals. There are lots of altarpieces and, in the cloister, many good memorials; in the southern nave clerestory are five windows with the oldest stained glass in Germany (late eleventh/early twelfth century). Four panels of the life of Mary, on pillars in the nave, were painted by Hans Holbein the Elder in 1493, and there’s a huge fresco of St Christopher in the southern transept, painted in 1491.

At the southern edge of the centre, the combined churches of St Ulrich and St Afra are an oddity – the Roman Catholic basilica of St Ulrich and St Afra is a wonderful Gothic church with three huge Renaissance altars and the Flamboyant Simpertkapelle (with the tomb of St Simpert, bishop of Augsburg, who rebuilt the basilica and died in 807). On its north side, the basilica’s former entrance hall became the Lutheran church of St Ulrich in 1526; closed from 1629 to 1648, it was rebuilt from 1680, finishing in 1710 with a white stucco ceiling and a gallery – it’s a delightful and unusual space. It’s pretty spacious because it was built to hold pilgrims to the tomb of St Afra, martyred in 304.

Founded in 1966, the Roman Museum was housed in the former Dominican church (an unusual twin-naved building, dating from 1513-1515), but structural problems (with the floor, not the roof) led to it being closed in a hurry in December 2012. There’s been a temporary display in the Zeughaus (Arsenal, built by Elias Holl in 1602-7) since 2015, with no indication whether the church will ever be restored or a new museum built. The displays of Roman stonework are absolutely fine as they are and very impressive, and there’s a fine courtyard café-bar too.

The Maximilian Museum displays decorative arts, above all gold- and silverware from the city’s golden age – it’s housed in two sixteenth-century mansions, with a glass roof built in 2000 over the courtyard between them. The city’s fine art museum is in the Schaezler Palace (1765-70), with some beautifully restored Rococco rooms (and a recreated Rococco garden). The first half, the Deutsche Barokgalerie (German Baroque Art Gallery), displays work by Augsburg artists Anton Mozart, Johann Heinrich Schönfeld and Joseph Christ, the better-known Swiss artists Anton Graf, Angelika Kaufmann and Heinrich Fuseli, and others. The former chapel of St Catharine’s monastery houses the more interesting collection of Old German Art, notably works by Thomas and Hans Burgkmair, Holbein the Elder, Cranach the Elder, Christoph Amberger, and a locally iconic portrait of Jakob Fugger the Rich by Dürer, who had been summoned to Augsburg by the Emperor Maximilian I during the Diet of 1518.

North of the centre, near the cathedral, the Fugger-Welser Museum is in the Wiesel Haus, built c.1530 and named after the optician Johann Wiesel, the first to make spectacles tailored to the user’s eyesight, who lived here in 1637-42. It has excellent displays on local history, starting (fittingly) in the basement with the mining industry (mainly in Tyrol, Carinthia and what is now Slovakia) that made the Fugger and Welser families so wealthy. The Fuggers traded with Africa, India and the New World, and also funded the Habsburgs, as well as four popes and the kings of Hungary, England, Portugal and Denmark. The Welsers traded with India and South America, and actually ran the colony of Venezuela from 1528 to 1556 (using slaves, of course) and funded both Charles V and François I in their war against each other, only to go bankrupt in 1614. Incidentally, Luther was opposed to the monopoly power of the Augsburg bankers, but had no problem with slavery or child labour at the time.

Out on a limb contextually, but not geographically, the Brechthaus is the childhood home of Bertolt Brecht; it opened as a museum in 1998 to mark the centenary of his birth. Young Bert had a lively upbringing in Augsburg before moving to München in 1917 (studying medicine to escape the military draft) and then to Berlin, where of course he found fame as a radical playwright. The museum is informative, but only in German – there’s an English tour on the museum’s website but the wi-fi was too weak for me to access it there. 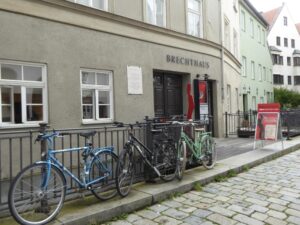