Norwich is a lovely city, once the second largest in England, which had a huge number of both pubs and churches, many of which survive – though not all are used for their original purpose. It also has one of the great Gothic cathedrals, which is just as described in the guidebooks and needs no help from me. 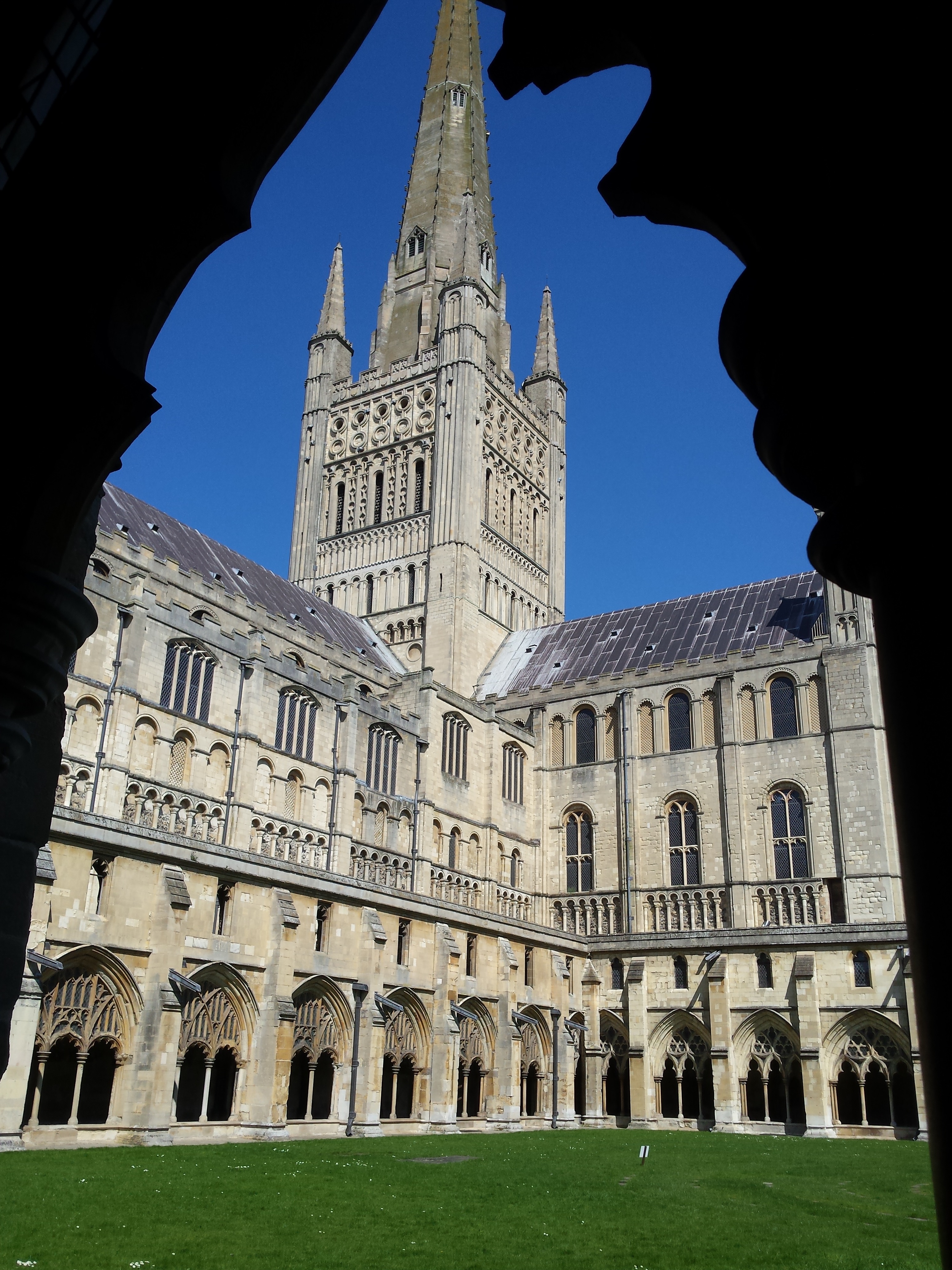 The town is dominated by the keep of the Norman castle, one of the finest and most unspoiled remaining (only that of Falaise is comparable) – although the façade of Bath stone was in fact added in 1834-9. It became the city’s museum and art gallery in 1894 (following the museum in Nottingham Castle, opened in 1878) – nowadays the keep is a striking but under-used three-storey space, and the galleries are arranged around the Rotunda, created in 1969 by filling in a courtyard. Over the next two years a major project will reinstate the floor inside the keep and recreate the Great Hall (see below for more on the museum). Until then the basement and Prison Stories gallery are closed. 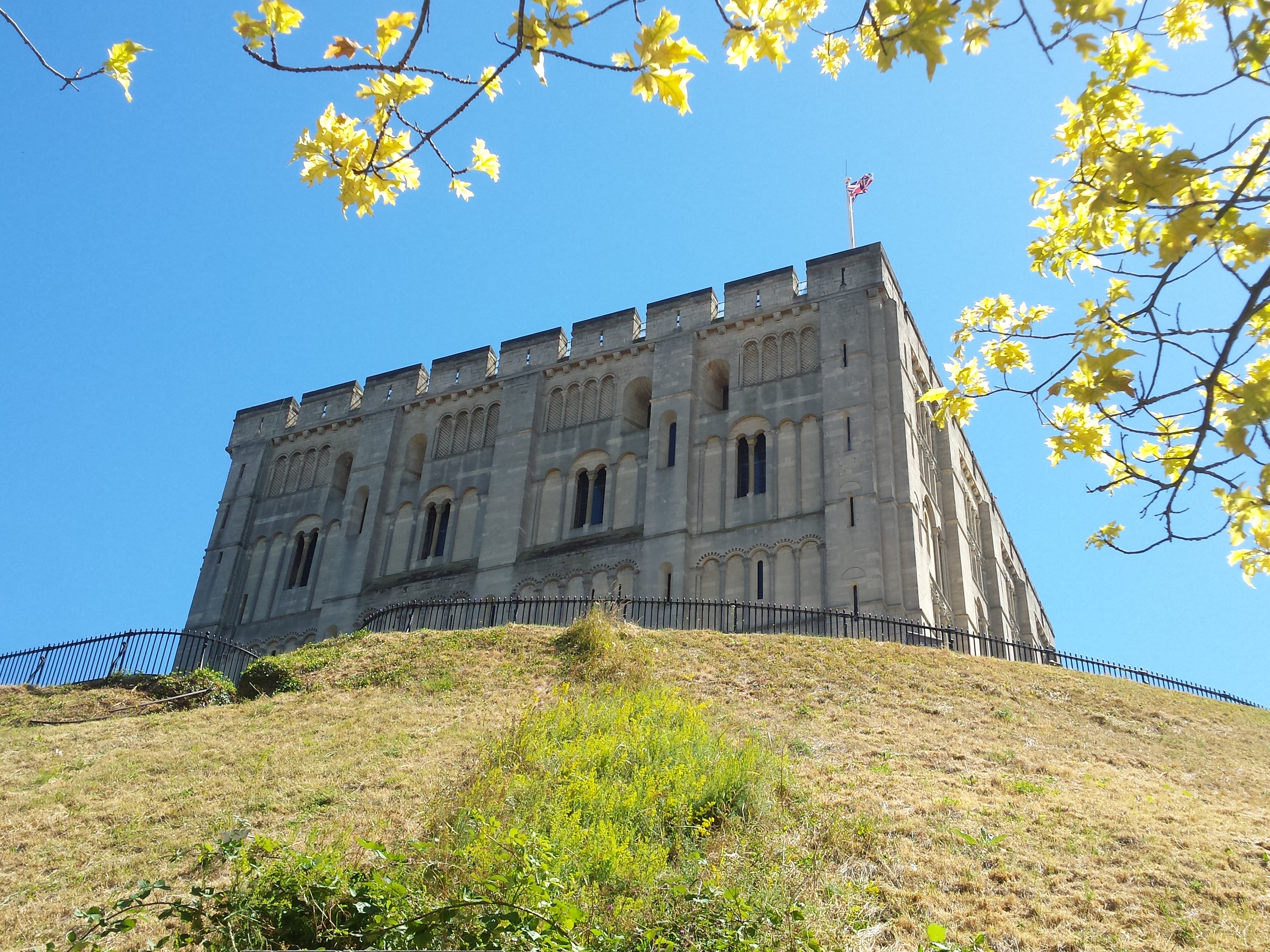 The city has an interesting history that’s relevant to our own times – it became wealthy and populous through trading with continental Europe, but was also the site of the first blood libel in 1144, when the Jewish community (French-speaking, and closely linked to the Norman rulers) was accused of killing a boy in what was alleged to be a ritual murder. From Norwich this evil notion spread across Europe and has been commonly rolled out in outbreaks of antisemitism.

Rather more uplifting is the story of Julian of Norwich (c1342–c1416), a nun who had mystical visions and whose Revelations of Divine Love is the first book in the English language known to have been written by a woman (yep, Julian, not Julia). In about 1414 she was visited by another female mystic, Margery Kempe (c1373 – after 1438)  from Kings Lynn, who dictated The Book of Margery Kempe, possibly the first autobiography in the English language, telling of her many pilgrimages as well as her mystical conversations with God.

Norwich also received many Protestant refugees from the Low Countries, known as the Strangers, who revitalised the city’s weaving industry with modern know-how, and introduced printing and brewing with hops (until then, English beer was just a safer alternative to water). They also brought canaries with them, hence the nickname of the city’s football team. Alas, the city, already badly hit by the Black Death, lost a third of its population to plague in 1579, including many of the Strangers, but they were reinforced by Huguenots, exiled from France, and the city was effectively tri-lingual (English, French and Dutch) for some time.

Even in the eighteenth century the city had not expanded beyond its medieval walls. It did grow to around 37,000 by 1800, but other cities were growing much faster. However, the Norwich School of Artists (a club more than a teaching establishment), founded in 1803, was the first such body outside London, and benefitted from the area’s historic links with the Netherlands (and the similarity in their landscapes) – many of the local nobs owned paintings by the great Dutch artists. Their fresh realism was striking, but the finest of the Norwich artists, John Sell Cotman (1782-1842) became increasingly impressionist and indeed Turneresque (alas, he was forgotten by the time of his death, and there were no obituaries). In 1814 Colman’s of Norwich was founded and its mustard is still England’s best known – Jeremiah James Colman (1830–98) bought many paintings by the Norwich School’s leading artists, and donated them to the Norwich Castle Museum.

As well as the Norwich School, the museum has odd works by Jacob van Ruisdael, Hobbema, Aert van der Neer and Gainsborough, as well as a Hogarth of a drunken friend vomiting (painted at the wife’s request), a big double portrait by Zoffany and Gilpin of a couple with horses, a Van Loo of Horatio Walpole (younger brother of Sir Robert and a Norfolk MP for 54 years), a David Roberts of Jerusalem and a Burne-Jones Annunciation. There’s also a limited amount of twentieth-century art, notably pieces by Gwen John, Marie Laurencin, Bridget Riley, Maggi Hambling, Sandra Blow, Ana Maria Pacheco and Mary Potter. For some reason the art galleries are also home to Nelson’s hat from the Battle of the Nile and a Spanish admiral’s sword captured at the Battle of Cape St Vincent- there’s no doubt that he was very aware of his image and indeed took care to promote his brand as far as possible.

Other galleries cover natural history, decorative arts, and history, from ancient Egypt via the Snettisham Treasure, Boudica and the Iceni, Roman settlements such as Venta Icenorum (now Caistor St Edmund, three and a half miles south of Norwich) and the Saxon and Viking invasions, to the arrival of the Normans and the foundation of Norwich. It seems to end there, except that, like most of the city museums I’ve visited recently, the local regimental museum has been incorporated, covering the twentieth-century campaigns of what is now the Royal Anglian Regiment. I was interested to learn of the regimental almshouses built in Norwich and Kings Lynn after both world wars, which are still in use.

The huge Market Place is the heart of the city’s commercial core – unusually, it’s filled by a tightly-packed grid of semi-permanent booths, many serving food, and almost all seemingly claiming to be ‘bohemian’ – it’s obvious that anything that claims to be bohemian cannot actually be so. Anyway, it’s dominated by the massive City Hall, a classic Deco block completed in 1938, and on the south side by the church of St Peter Mancroft, the largest of the 32 medieval churches within the city’s walls – it’s known for its superb Perpendicular architecture and 15th-century stained glass (above all in the east window), and also as the burial place of Sir Thomas Browne, who was a doctor in Norwich from 1637 until his death in 1682 and is occasionally remembered as the author of some remarkably polymathic books in majestic but melancholic Baroque prose. The most obviously relevant to Norwich is Hydriotaphia, or Urn-Burial, a meditation on death, burial practices and the ephemerality of fame, inspired by the discovery in Norfolk of some Bronze Age burials in earthenware vessels. Browne was perhaps the favourite author of another adopted Norfolk writer, WG Sebald, who taught at the University of East Anglia until his death in a car-crash in 2001.

On the north side of the Market Place, the Guildhall (1407-24) was the seat of the city’s civic bodies until the City Hall was built; it looks a bit like a church, with its flint-coated walls. In the maze of largely pedestrianised streets behind the Guildhall are other medieval buildings, such as St Andrew’s Hall, completed in 1449 as the nave of the Blackfriars’ church and used as a public hall ever since the Reformation, and the fifteenth-century church of St John Maddermarket, now maintained by the Churches Conservation Trust and open three days a week, its interior crowded with monuments, Georgian woodwork and Victorian stained glass. Almost as central is the Strangers’ Hall, with its Tudor Great Hall atop a fourteenth-century undercroft – its name comes from the immigrants who were put up there in the sixteenth century. The magnificent staircase and its window and the Walnut Room were added in 1627; it’s now a museum of domestic history, open two to four days a week. Finally, the Dragon Hall, a medieval trading hall built in 1427-30 and known for its spectacular crown-post wooden roof, is now home (the Norfolk and Norwich Heritage Trust having been wound up in 2015) to the National Centre for Writing, but is open roughly monthly for volunteer-led tours. Known as Writer’s Centre Norwich until its relaunch this year, this led the drive for Norwich to become England’s first UNESCO City of Literature in 2012, and now supports both writers and readers in many ways. Of course Norwich’s contemporary literary fame is based on the University of East Anglia’s creative writing courses, established by Malcolm Bradbury and Angus Wilson back in 1970.

Speaking of the university, do not fail to make the pilgrimage out west to the Sainsbury Centre for Visual Arts, a superb building (built by Norman Foster in 1976, one of the best of the high-tech buildings of that period) housing a simply amazing collection in which art from British Columbia and Alaska, Ecuador, Egypt, Mesoamaerica, the Cook Islands and the Marquesas and Africa (for instance) is displayed alongside paintings by Soutine, Modigliani, Giacometti, Moore, Degas and above all Picasso and Bacon, as well as a few oddities by the likes of Zoran Mušič, Edmund de Waal and Mark Gertler. Labels tell of a ‘production place’ rather than a nationality, putting all the artefacts on a level playing field. 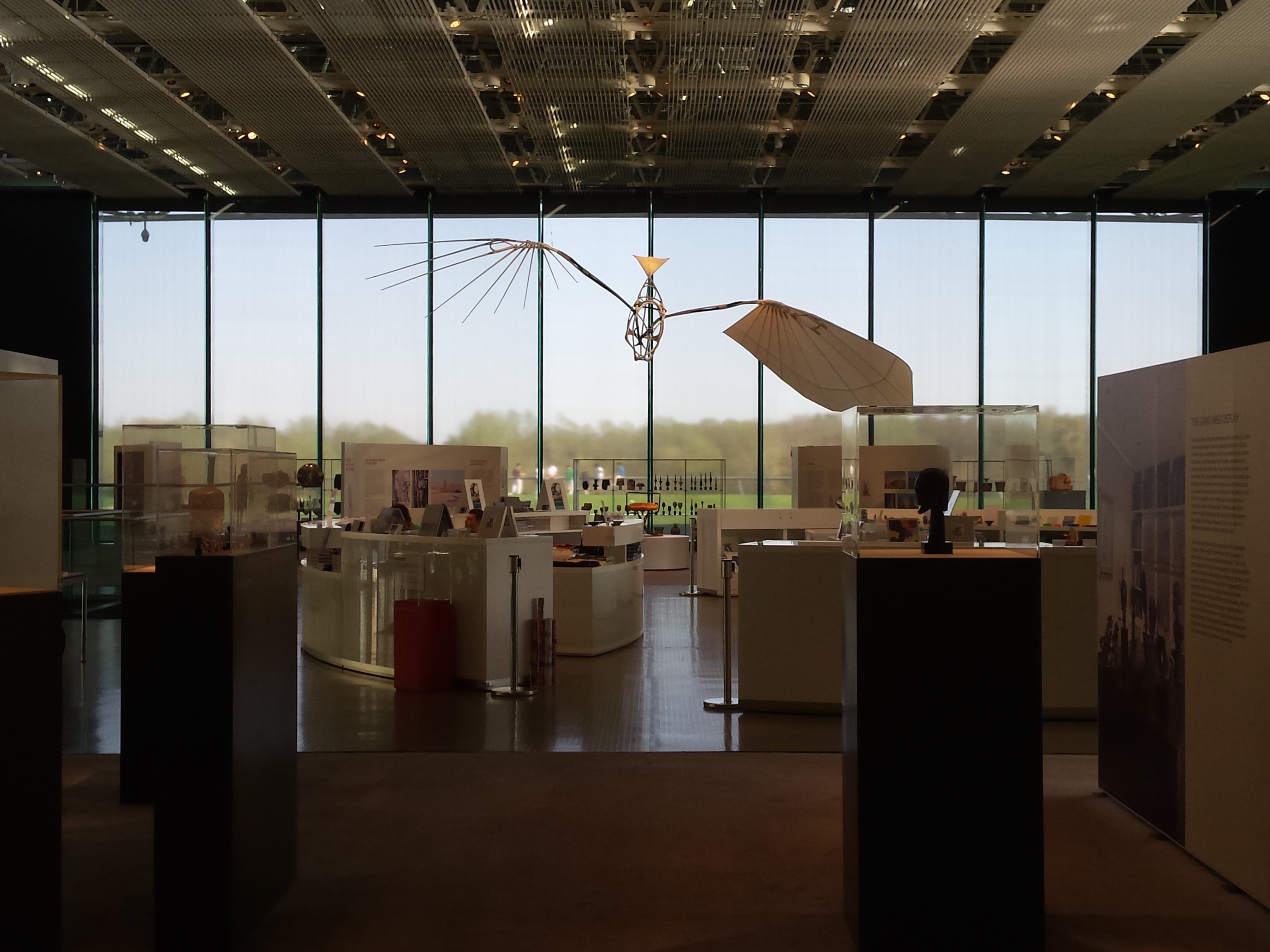 And finally… the pubs

There’s only one pub that you have to visit in Norwich – no, I’ll rephrase that, there’s only one pub in Norwich that I own a share in, but it is a goodie. The White Lion has real ales from Milton and elsewhere, but it’s even better as a cider pub, with 19 varieties available when I was last in, and it just feels like a great local pub. It’s just north of the river from the centre, in the area where most of the Strangers settled – known as ‘Over-the-Water’, this is still a slightly odd area, within the walls but still semi-detached from the main part of the city. Nine of its seventeen churches still stand – it’s remarkable that so many of them have been taken over by theatrical or musical groups.

I’ve also enjoyed visiting the King’s Head, which has at least a dozen real ales on tap (and mild is always available, but keg isn’t), and the Vine, right in the centre, which is the city’s smallest pub and serves good beers and better Thai food. For something totally different, the Belgian Monk offers a wide range of, yes, Belgian beers and food (mussels and all that) – it’s more restaurant than pub, but still, pretty authentic and not bad value.

As you’ll recall from my post on Cambridge’s pubs, the dominant breweries in East Anglia are Greene King and Adnams, but there are a couple of smaller ones in the Norwich area. Lacons in Yarmouth was founded in 1760 and closed in 1968; it reopened in 2013, with the original yeast strain retrieved from deep-freeze in the Norwich-based National Collection of Yeast Cultures. I’ve also enjoyed the Weizen (wheat beer) from the Grain Brewery, not in the Isle of Grain but a few miles south of Norwich.