Way back in 2012, my cycling buddy Rob and I had an enjoyable four-day jaunt from Newcastle through Kielder Forest and a smidgen of Scotland to Carlisle and Bowness, and back along Hadrian’s Wall, more or less. (See also my photos.)  Recently we returned, so he could write an article about cycle routes around Hexham. I did a couple of rides with him, and also visited a couple of the Roman forts as well as Hexham itself, which Rob didn’t have time to do (apart from the pubs, of course – see below).

The main town between Newcastle and Carlisle, Hexham is a stout 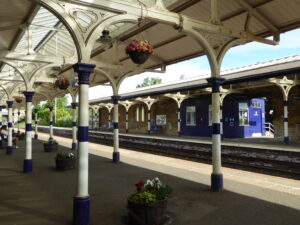 market town that has become the main base for visiting Hadrian’s Wall, just a few miles to the north. Historically, it exists because St Wilfrid founded a Benedictine monastery here in about 674; having studied abroad, Wilfrid became abbot of Ripon and achieved fame for his role in the Synod of Whitby in 664, persuading the King of Northumbria to align his church with Rome rather than the Irish church. He was then appointed bishop of Northumbria, ie York, but his time in office was interrupted by several periods of exile (when he usually travelled to Rome to plead for papal help).  In 660 the East Anglian princess Æthelthryth (more often known as Etheldreda, or even Audrey), was forced to marry the fifteen-year-old Prince Ecgfrith of Northumbria, despite her vow of virginity and desperation to live as a nun. Wilfrid persuaded Ecgfrith to agree to her wishes for a while, but in about 672 she fled home to Ely and founded a monastery there. The relevance of this is that she gave Wilfrid her dowry, the area known as Hexhamshire, to pay for a new monastery, and he was based here after 705, when John of Beverley took over at York. Built with stone from Hadrian’s Wall, Hexham Abbey was a very grand edifice in the continental style, but was destroyed by the Vikings in 876, after which the Benedictines were replaced by hereditary priests, believe it or not. 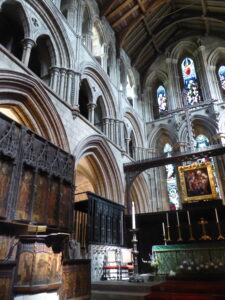 In 1113 Augustinian canons arrived to rebuild the church, but work was halted in about 1180 to allow the new Gothic ideas to be properly absorbed. In any case the nave was destroyed by the Scots and left in ruins for 600 years; the priory was dissolved by Henry VIII in 1537 but continued in use as the parish church. From 1860 the east end was rebuilt, and from 1908 the nave, in classic Victorian-Gothic style – it really is a splendid building now. What’s more, in 2012 the monastic buildings removed by Henry VIII were returned to the church and now house a good (free) exhibition centre and a café. The crypt, with its carved Roman stones, is unfortunately closed due to damp. There are various treasures, but perhaps the most striking are the Passion paintings, a set of wooden panels painted in the early sixteenth century, including a dance of death.

On the far side of Market Place is the Moot Hall, a keep-like structure 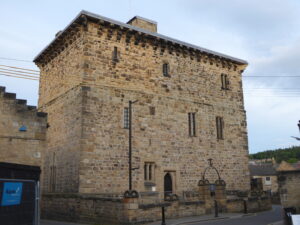 built around 1400 that was used as a courthouse and, behind it, the Old Gaol, built in 1330-33 as England’s first known purpose-built prison and now a museum. The Archbishops of York held civil as well as ecclesiastical power in Hexhamshire, meaning that eighty per cent of those tried were found innocent, and hardly anyone was executed except for the most heinous crimes – theocracy isn’t always a disaster. However the Market Place did see a bit of a bloodbath after the Battle of Hexham in 1464, when thirty Lancastrian rebels (supporting Henry VI against Edward IV) were beheaded, including the Duke of Somerset. In addition, around 50 died in 1761 in a riot against military conscription. And one of the museum’s major themes is the lawless period of the Border Reivers (see my post on Carlisle), when there was a semi-military regime of March Wardens on both sides of the border – it’s a good display but it uses some specific terms without explanation, particularly talking about ‘loyalty to the Surname’, which was something similar to a Highland clan.

Back on the other side of the abbey is a surprisingly large and pleasant park, combining the gardens of Abbey House (opened to the public in 1911), Hexham House (opened in 1928) and the Sele (opened back in 1753) – it’s all now listed as Grade II, as is the very grand Queen’s Hall across the road, built in 1866 as a town hall and corn exchange – it now houses a splendid library, arts centre and tourist information office.

What have the Romans ever done for us?

Apart from providing a large stock of pre-shaped stone for building churches and houses in the following centuries, of course. However, after that, while people were vaguely aware of Hadrian’s Wall itself, the forts and milecastles were largely lost and forgotten. It was only in the mid-nineteenth century that a couple of local landowners-cum-amateur archeologists began to rediscover and explain the remains. The first forts were built of wood after Agricola’s victory at Mons Graupius (possibly in Aberdeenshire) in about AD 83, and the wall itself came later, between 122 and 128 – the emperor Hadrian made the epochal decision to end the previous policy of steadily expanding the empire and instead to consolidate it along natural geographical borders. His successor Antoninus Pius tried to establish a new border further north at the Antonine Wall, but this was abandoned by Marcus Aurelius, returning the border to Hadrian’s Wall; forts were still being rebuilt in the third century (and the first traces of Christianity appeared c370 AD).

Chesters, the closest Roman fort to Hexham, just four miles north, was inherited in 1832 by John Clayton, who worked as a lawyer and also started excavating in 1843; he also bought Housesteads in 1838 and Vindolanda in 1863, as well as milecastles and other sites along the Wall. His record-keeping was poor, he dumped lots of scraps of bone and ceramics in the river, and when the baths were excavated 33 skeletons were simply lost, but his work was a massive stepping-stone for the professional archeologists who came later. The museum at the site, opened in 1896, has a good collection of inscribed stones, such as altars and milestones, and glass, buckles, jet and shale beads and Samian ware. When Byron writes ‘Dash down yon cup of Samian wine!’ he’s clearly writing about wine from the Greek island of Samos, but it turns out that Samian ware is pottery from Gaul (now France and the Rhineland), made in the 1st to 3rd centuries AD and easy to date due to the potters stamping their name on each piece.

Vindolanda, a dozen miles to the west, is now owned by the Vindolanda Trust – the house that is now the museum, Chesterholm, was owned by the antiquarian the Rev. Anthony Hedley until his death in 1835, and by the Claytons of Chesters from 1863 to 1929; the archeologist Professor Eric Birley owned it from 1929 to 1950, and it remained a private home until 1974 when it was bought by the trust (led by Eric Birley’s son Robin). Rather bizarrely, the adjoining house, with a field that almost cut the Roman site in two, was owned by a family friend of mine until they sold to the trust in 2013.

There’s more to see here than at Chesters, with plenty of stone work, both from the the fort itself (which had at least nine incarnations) and the vicus or civilian village to the west, where visitors enter. The museum is larger and more modern, with lots of leather shoes, wooden clogs, spear and javelin heads, boxing gloves, leather tents, brooches and combs, a chamfron (a ceremonial facemask for a horse), tools, keys, coin and more red Samian ware, although most of the pottery was made on the south coast of England. There are also wooden objects such as tent pegs, buckets and bungs, shovel, baskets, alder pipes and an alder toilet seat. The most important find here (so far) was the Vindolanda Writing Tablets, postcard-sized wooden tablets unearthed since 1973, the first examples of Roman writing in ink. At least 752 have now been found, giving a wonderful picture of everyday life here, starting before the Wall was built – one is an invitation to a birthday party, an almost unique example of writing by a Roman woman to another. They are now held by the British Museum, with a good display here, but there are plans for some to be brought back here.

Excavations continue every summer (with a break in 2020 only), with a display of recent finds in the museum, such as a bowl with Christian symbols (2009), a meat cleaver, cheese press, intaglios and a gaming board and counters (2019), and already in May 2021 (and not yet on display) a stone carving of a naked male figure holding a spear and standing in front of a horse or donkey.

Back in 2012, we also visited Housesteads fort, a couple of miles north-east of Vindolanda (and eight miles west of Chesters), which is managed by English Heritage but can also be entered free by hikers on the Hadrian’s Wall path – the three miles west to Steel Rigg is one of its most dramatic stretches. The lower sections of various buildings survive, notably the commander’s house and the communal latrines. There’s a tiny museum here, but nothing compared to those at Chesters and Vindolanda.

We really struggled to get a decent drink after a day’s cycling – the Station Inn and the Tannery had no cask or real ale at all, nor did the Anchor Inn in Heydon Bridge, which would have been a great place to stop right by the now-pedestrianised bridge. We did stop at the Tannery for pizza, and they were also out of the first wine we tried to order. The Heart of Northumberland is a well-respected free house and did have four real ales on draught, but it’s almost totally set up for dining so we just had one good pint and moved on. We did find some refreshing Deuchars at the Globe, and a decent local pale ale from Twice Brewed at the Grapes, which is a Craft Union free house, seemingly aiming to compete with Wetherspoons at the cheap end of the market – we did also have a Ruddles at ‘Spoons, but it was well past its best.

There are some better prospects a few miles outside Hexham, notably the Dipton Mill Inn two miles south, which is home to the Hexhamshire Brewery – but was, alas, closed for building work. A similar distance to the north-east, the Rat Inn in Anick is clearly a fine gastropub, but I went past at the wrong time of day. I will say that even if beer is a problem, local chutneys are excellent and widely available! And there are some interesting Indian restaurants (which we did not sample) – Zyka has a good line in game curries (pheasant and venison) and there are others right on the station platforms at Hexham and Corbridge so that people from Newcastle can be poured onto the train home after a night out. I had a good light lunch at Hextol Tans, a vegetarian café on the traffic-free St Mary’s Chare (it’s run by the Hextol Foundation, helping the disabled, and tans are gloves, a big local product in the eighteenth and nineteenth centuries). And we really enjoyed a dinner on the same street at Buongiorno, a Sardinian-owned place that we’d have happily eaten at a second time if we hadn’t left it too late. 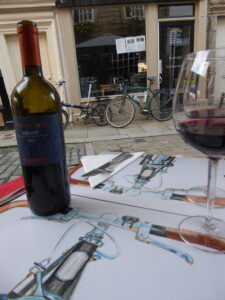