It’s an odd thing that when I take the train from Cambridge to London’s Kings Cross station I pass through both of the original Garden Cities, at Letchworth and Welwyn, as well as a couple of the later New Towns, at Stevenage and Hatfield (and if I go to Liverpool Street instead of King’s Cross I pass through Harlow New Town). For those who are not familiar with them, garden cities and new towns were twentieth-century responses to the dreadful living conditions in Victorian industrial cities. To be fair, industrialists had tried to improve living conditions from the end of the eighteenth century, in model villages such as New Lanark, Saltaire, Port Sunlight and Bourneville, but it was Ebenezer Howard‘s book To-Morrow: A Peaceful Path to Real Reform (1898), revised as Garden Cities of To-morrow (1902),  which caught the public imagination and launched a movement. The aim was to create a community with the benefits of both town (good jobs, educational and cultural opportunities) and country (nature, fresh air and low rents), expressed in Howard’s diagram of The Three Magnets (remembered in the name of the Wetherspoons pub in Letchworth…), with Town, Country and Town-Country pulling the People towards them.

Howard founded a company called First Garden City Limited which raised funds and bought land, and drew up plans with the architects and planners Raymond Unwin and Barry Parker; construction began in 1903 with the first cottages occupied the next year. In 1905 the first school was completed as well as the Mrs Howard Memorial Hall (in memory of Howard’s first wife, who had died in 1904) and the Cheap Cottages Exhibition, aiming to show that houses could be built for £150. This brought a lot of publicity, and around 114 of the original 131 cottages are still occupied (with round green plaques by the front door). These are mostly north of the railway, along Nevells Road, The Quadrant and Wilbury Road (the current station dates from 1912, following earlier halts in 1903 and 1905), but most of the public buildings, shops, schools, cinemas etc are to the south, as well as the Urban Cottage Exhibition Area on Lytton Avenue, which followed in 1907. Also opened in 1907 was the Skittles Inn at the east end of Nevells Road, the famous ‘pub with no beer’ which nevertheless became a popular adult education centre. Many architects were involved in addition to Parker and Unwin, such as CM Crickmer, Baillie Scott (mentioned in my post on West Cambridge), William Clough (whose nephew Sir Clough Williams-Ellis worked as site supervisor here, and went on the build the fantasy village of Portmeirion from 1925) and others, creating an attractive medley of styles, mostly rooted in the Arts and Crafts movement, and there are plenty of gardens and other green spaces, as intended. The shopping centre and public buildings are in a slightly grander, more classical, style. 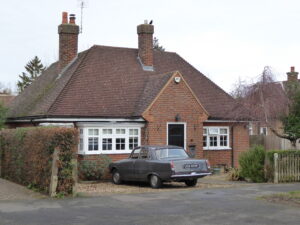 But there was always meant to be industry here as well – the most obvious example is the wonderful Spirella corset factory immediately northwest of the station, now converted to offices. Irving Parachutes (founded in 1925) and the British Tabulating Machine Company (which arrived in 1920, and made the Bombe machines for Alan Turing’s code-breakers at Bletchley Park) both played major rôles in World War Two; the latter eventually became the computer company ICL (taken over by Fujitsu in 1998). The Anglia Match Company was founded (under a different name, no doubt) in Salzburg by Ukrainian-Jewish brothers who moved the business here in 1935 (it closed in 1954). 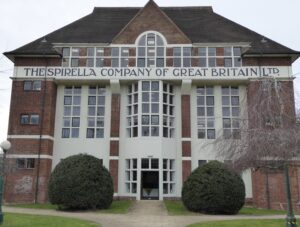 The town is only accidentally car-dominated, unlike the post-World War Two new towns, which were designed that way. Even so, there should be a lot more cycle parking, and the route west to Hitchin needs to improved, which wouldn’t take a great deal of work. The National Cycle Network’s route 12 runs north-south through the town, passing the UK’s first roundabout (c.1909), just south of the centre at the Broadway/Sollershott junction.

Quakers and Theosophists were prominent among the early residents, and as mentioned above alcohol was frowned upon when the town was founded; however there are now a few decent pubs, and even the Garden City Brewery.

In terms of museums, Letchworth is a bit rubbish, as North Hertfordshire Council decided to consolidate its offering, closing the Letchworth Museum and Art Gallery in 2012 and eventually opening a pretty good new museum in the former Hitchin Town Hall in 2019. But One Garden City, which now manages Letchworth, decided it did need a museum after all, and in June 2019 opened a one-room micro-museum exploring Letchworth’s social history for school groups. Of course you can walk or cycle around and get a feel for the place. I have the detailed 1977 Letchworth Conservation Area map which describes many of the original buildings – I don’t think it’s available now, but may be able to find a series of Heritage Trail leaflets. Otherwise, there are organised walks such as this.

One thing that caught my eye in the Hitchin museum was the painting of The Red Curtain (c1916) by Harold Gilman, one of the leaders of the (post-Impressionist) Camden Town Group, who moved to Letchworth in 1908 (living first at 15 Westholm Green, then at 100 Wilbury Road). The Red Curtain was painted in the living room of Stanley Parker, brother of the architect Barry. Spencer Gore visited Gilman and produced fine paintings of Gilman’s House, Wilbury Road and Letchworth Station. 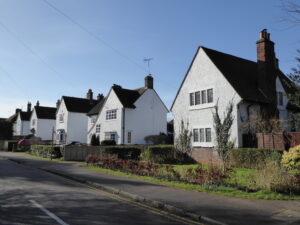 The second Garden City, at Welwyn, was founded after World War One – it was much closer to London (on the Great North Road and the Great Northern Railway) and it was accepted that many residents would commute to the big city, but it was also a successful development of Howard’s ideas. Nowadays it seems more City than Garden, in comparison with Letchworth, but it does have splendid green axes, mainly north and south along Parkway. It was laid out by the French-Canadian architect Louis de Soissons (1890–1962), who used grander Queen Anne and neo-Georgian styles in the centre than at Letchworth – but the residential areas are pleasantly green and informal. Instead of cheap cottages, Welwyn had the the Daily Mail Ideal Home Model Village (41 houses on Meadow Green and Handside Lane) opened by Earl Haig in 1922. 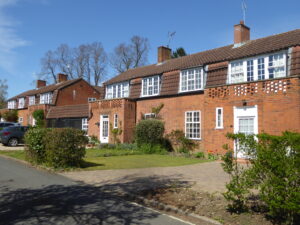 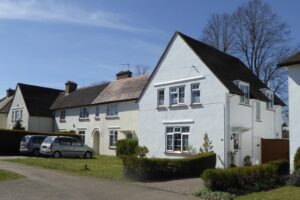 Just to the northwest (in the steep valley crossed by the Digswell viaduct, the major two-track bottleneck on the East Coast Main Line), the original village of Welwyn is now known as Old Welwyn and has preserved much of its charm – I’m always happy to see the plaque noting that Vincent Van Gogh walked here from Ramsgate in 1876 to see his sister Anne, who was teaching French here. It’s near St Mary’s church, a classic thirteenth-century structure that’s listed Grade II.

The railway (a much wider corridor than at Letchworth) became a barrier, with the new centre to the west and industry and what soon became ‘wrong-side-of-the-tracks’ housing to the east. Immediately east of the station, the Shredded Wheat silos are a familiar landmark – built in 1926 by de Soissons (inspired by Le Corbusier, but also by the grain silos of the Canadian prairies), the factory closed in 2008 and has been a problem ever since. Originally called Welgar (geddit?) and later Nabisco, it’s now been dubbed the Wheat Quarter, but all proposals for its future use have been bogged down in controversy. Plans by Tesco (whose headquarters are nearby) for a mixed-use development have been rejected by the planners; 27 of the silos were demolished in 2017, and there’s now talk of building 1,220 homes with arts and community spaces – but the buildings would be up to ten storeys high, double anything previously allowed here. 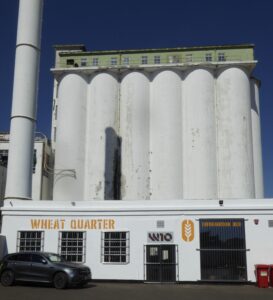 One surprising thing about Welwyn is that you can visit some Roman baths here; what’s weirder is that they are right under the A1(M) motorway. A steel vault was installed when the new road was built, and in fact you’re hardly aware of the heavy vehicles thundering overhead. They’re not the best Roman baths I’ve seen, but they’re worth a visit. 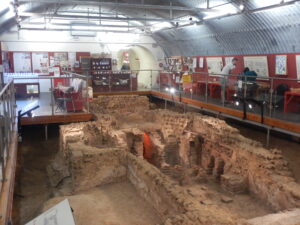 In addition to the two garden cities, there’s Hampstead Garden Suburb, which arose in response to fear of development following the opening of Golders Green station (on the London underground’s Northern line) in 1907. Initially there was talk of an extension of Hampstead Heath, but then Unwin left Letchworth to plan a garden suburb, involving architects of the calibre of Edwin Lutyens, then known for his work on country houses but later famous for laying out New Delhi, inspired by Garden City principles. Baillie Scott was also involved here, as (in the 1930s) was Ernst Freud (son of Sigmund). It has grand public buildings and churches, informal residential areas, green spaces, but no industry or pubs, and few shops. The extension created to the east in 1911-12 was soon cut off when Lyttelton Road and Falloden Way were connected to the Barnet Bypass and became part of the A1, near its junction with the North Circular, still a sewer of pollution and noise. I don’t know the area well, but it’s long been known as a good place to live, with intellectual and artistic associations.