It’s easy to think nowadays that the Camino de Santiago has always been Europe’s pre-eminent pilgrimage trail, but other routes across the continent were just as important for centuries before the relics of St James were miraculously moved to northern Spain, and now, as the various caminos have become too busy and indeed something of a cliché, they are being rediscovered as an alternative option. (And let’s not forget that the Camino de Santiago itself was largely forgotten for many centuries – even in the early 1980s it only saw a few thousand pilgrims per year.) A couple of months ago I was in Conques and Mont Saint-Michel, both important pilgrimage sites before Santiago de Compostella became so dominant (and they both survived as stopping points on routes to Santiago). But foremost among these is, naturally, the main route to Rome, the city of the Popes, from northwestern Europe, known as the Via Francigena or French Way. 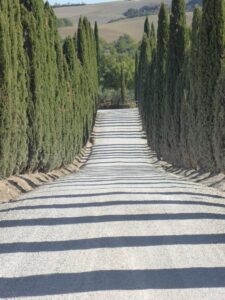 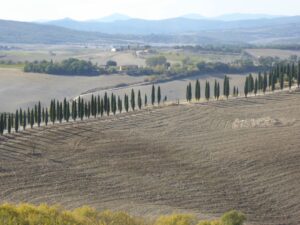 It would be a long walk from Canterbury to Rome, but a great cycle ride – the most exciting section (leaving aside the challenge of crossing the Alps) is the last one, through Tuscany and Lazio to the Holy City. And what’s more, it’s now possible to ride this route with an e-bike. A one-way rental package allows you to drop the bike off in Rome, with accommodation and baggage transfers booked in advance – my friends at Live Breathe Hike do a great job of this. This ticks a lot of boxes, but can lead to a certain loss of flexibility, especially if you double up the shorter stages at the end, as I did. When I first cycled around the hill-towns of Tuscany, several decades ago, it was fantastic, but for the first couple of days we kept fuming, ‘Oh WHY do the hill-towns have to be on top of the hills?!’. Naturally, with an e-bike it’s easy to cruise up to the hill-towns, but in fact the Via Francigena route largely sticks to the valleys, apart from overnights in San Quirico d’Orcia and Radicofani, and you’d have to tinker with the itinerary to visit (and perhaps stay overnight in) other hill-towns. Montalcino would be the most obvious one, followed by Castiglione d’Orcia, while Pienza is fantastic but a bit more of a deviation. On the other hand, Buonconvento, which is on the Via Francigena, was a bit underwhelming. And Lucignano d’Arbia, which is tiny but lovely, is right in the valley but separated from the Via Francigena by a river – it would be an easy deviation on quiet roads and tracks, however.

The Val d’Orcia was declared a World Heritage Site by UNESCO in 2004 (following Siena, which was listed in 1995), and in 2020 the Via Francigena in Italy itself became an official candidate for listing (‘There goes the neighbourhood’, said my friend who lives on the Via, while I have my own doubts about WHL inflation). The rationale for the listing of the Val d’Orcia is that it developed as a bread-basket for the city-state of Siena, and then when that was taken over by Firenze (Florence) it stagnated and was thus preserved over the next four centuries. Renaissance artists portrayed the valley’s beauty, presenting it as a utopian ideal of the well-managed landscape, with small farms producing a mix of grain, vines, olives, fruit, and vegetables, as well as hay meadows and grazing. I made the minimal deviation to the fortified granary of Cuna, but admired the fortified hill-top  farms without riding up to them. Meanwhile the pilgrim traffic on the Via Francigena has left abbeys and resting-places for pilgrims, such as the Castello di Spedaletto, now an agriturismo (rural B&B) with a pasta mill. It’s a useful reminder that almost all of Europe’s landscapes are man-made, one way or another, and if the green desert of the Lake District can be granted World Heritage status, why not the Val d’Orcia? 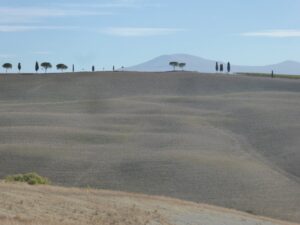 Anyway, I started from Siena, but there’s a good case for starting further north in Lucca, a lovely walled town full of cyclists – you’d pass through San Miniato and Poggibonsi (but perhaps overnighting in the less attractive Castelfiorentino). Siena, of course, is a wonderful historic centre of art, history and gastronomy where I’ve spent time in the past, but on this occasion I just had a brief evening wander through the centre. Heading south, I was very soon cycling on gravel roads through classic Chiantishire countryside (yes, the Chianti region is to the north of Siena, but the area just south fits the scenic cliché, with its rows of cypresses, wheat fields, olive groves, vineyards and blue remembered hills). However, on the second and third days, the southern end of Tuscany turned out to be much less densely populated, and rather on the dry side for agriculture, I’d have thought.

The highlight in terms of food and accommodation was La Selvella, an agroturismo outside Radicofani which is an impressive organic farm and also a rallying point for local female entrepreneurs and others working to boost the local economy and stop young people from leaving – all of which seems to be going very well. It’s a lovely spot, and the food is spectacular (including something like a small Cornish pasty, which I’ve not seen in Italy before – and yes, I do know about calzone and panzarotti).

Crossing a low ridge, I entered Lazio, the region surrounding Rome, and soon arrived at Proceno, another cute little hill-town – this area is much less well-known than Tuscany (and much less visited) but there’s plenty to see. There are some big lakes (and the town of Bolsena, on the lake of the same name, was a highlight) and then there’s Viterbo, the largest and most interesting town between Siena and Rome, at least on this route. Arriving on a gravel track that ended suddenly at a bypass and a new retail park, the sudden onslaught of motor traffic was a bit of a shock, and the road surface was terrible (not to mention the one-way system in the old town). But it’s a lovely place, full of history and fine buildings (with distinctive external staircases) – it was the seat of Frederick Barbarossa and then of the popes from the thirteenth century, and is still the main centre of military aviation in Italy, with Merlin helicopters buzzing around just as they do over my family home in Cornwall.

From here to Rome the route largely follows the ancient Via Cassia, with a couple of stretches of Roman paving still in use, as well as a lot of gravel tracks, and it seems to be downhill for a surprisingly large part of the way to the capital. In Tuscany there are often separate routes for walkers and cyclists on the Via Francigena (overall I think the cycling route is likely to be closer to the original, as walkers are diverted away from roads), and both are well signposted; but in Lazio they mostly follow the same route, which is poorly signed – look out for tiny blue and white markers (and GPS, of course).

The approach to Rome itself is far more pleasant than you might expect – there are no sprawling suburbs, and then from Labaro station there’s a remarkably quiet cycle route on a flood levee alongside the Tiber. The final stage to the Vatican is on a good-quality segregated cycleway with light-controlled crossings that only ends a few blocks short of St Peter’s Basilica, journey’s end of the Via Francigena. Although in fact a week later I was way down south in Taranto and Lecce and was surprised to see references to the Via Francigena there – evidently some pilgrims, having made it to Rome, pushed on to the southern ports to catch a ship towards Jerusalem. That would take a few weeks even on an e-bike.

I had a very enjoyable ride from Siena to Roma, but I was very aware that this wouldn’t really be a good trip for a total beginner, despite the general image of e-bikes needing no effort or experience at all. In this case, there’s a lot of loose gravel, and some of it on steep descents that I took very carefully (there are some horribly corrugated sections too). And of course an e-bike is actually an electro-assisted bike – you really do have to pedal, the battery just gives you a lift up the hills and an extra couple of kilometres per hour on the level – unless you opt for sport or turbo settings and drain the battery in half a day. Almost everywhere I stayed let me simply plug the bike in to charge it overnight – only once did I have to actually remove the battery and charge it in my room (along with camera battery, phone and laptop, of course….).