I made my way from Berlin to Hannover stopping at the four cities strung along the old railway line (the modern high-speed trains run further to the north) – Potsdam, Brandenburg, Magdeburg and Braunschweig. The last (aka Brunswick) was in West Germany, but the others were in the DDR and still had a rather communist feel when I made flying visits in 1995 – and there are still traces of that today, though I don’t find it as quaint as I used to. They’re all relatively small cities that don’t get many foreign visitors, but there’s plenty to see.

Properly, Brandenburg refers to the state which entirely surrounds Berlin and the city’s full and correct name is Brandenburg an der Havel. The Havel river plays an important rôle – the Altstadt (Old Town) on the northwestern bank was a Slav settlement by the tenth century, but in 1157 the Teutonic Albert the Bear settled on the southeast side, in what is now the Neustadt, and became the first margrave of Brandenburg. However the cathedral was built on the Dominsel, to the east, which was independent from the city until 1928. It was a trading city, joining the Hanseatic League (which I wrote about here) in 1315, and later developed into a centre of the metal-bashing industries. Its historic buildings didn’t do too badly in World War II, and having survived the drab communist period, they’ve been well spruced up. Oddly perhaps, none of the great palaces of the rulers of Brandenburg and its successor state, Prussia, are in or near the city of Brandenburg, but I saw a few in Berlin and Potsdam. There are quite a few churches that are worth visiting, particularly some that are on the European Route of Brick Gothic – I recently mentioned Baltic red-brick Gothic in places like Lübeck and Lund.

Before the churches, however, I went to the Altstädtisches Rathaus (Old Town town hall, 1450-68), which is unusual for being a non-religious example of fully-fledged Brick Gothic, with its blind tracery and clocktower. In front is a wooden statue of Roland, one of Charlemagne’s heroic paladins, dating from 1474, which was a symbol of the city’s status as a free city within the Holy Roman Empire and of royal protection from the local nobles (I mentioned a similar one in Bremen). Oddly, there’s a houseleek (Sempervivum) plant growing on his head, something I’m more used to seeing at altitude on alpine hiking trails. Nearby, on the northwestern side of the Altstadt, is a pleasant promenade where the city walls once were, linking the Rathenower Torturm, the oldest surviving gate (1290-1320) and the Plauer Torturm (circa 1400).

Nearby, St Gotthardt’s, still the parish church of the Altstadt, was founded in 1131 immediately after the canonisation of St Godehard (bishop of nearby Hildesheim from 1022 to 1038); the cathedral was only founded in 1165 (although there was a mission to the Slavs from 948 to 983). The tower of St Gotthardt’s still stands, but the rest of the church was rebuilt in the fifteenth century in the northern German Brick Gothic style. The 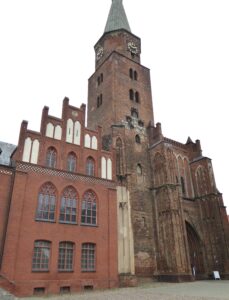 original Romanesque cathedral was also largely rebuilt in Brick Gothic style from around 1295 to 1460 (and restored in NeoGothic style in the nineteenth century); it’s a fine building, and there are lots of splendid painted wooden altars and memorials, and a famous Baroque organ, built in 1725 and largely unchanged. Just outside the cathedral close, the St Petri church was built in the early thirteenth century as the Margrave of Brandenburg’s own chapel and was then used as a parish church (although its tower was demolished in 1849).

In the Neustadt, the Katharinenkirche was rebuilt from 1381 to 1427, becoming an impressive example of Brick Gothic architecture – it’s a huge hall church that’s been rebuilt many times and now has an eighteenth-century gallery and a huge organ. On the south edge of the Neustadt, the church of the St Pauli monastery (c.1286) now houses an archeological museum. And I didn’t see this one, but about half a kilometre southwest of the Neustadt is St Jacob’s Chapel, dating from 1320; in 1892 it was in the way of a road-widening scheme and was moved about thirty metres west, and is now used as part of an art college.

Back in the Altstadt, near the bridge, the monastery church of St Johannis, dating from 1246 and rebuilt in 1411, was almost completely destroyed by a British bomb in March 1945 and rebuilt in 2015 (although the west end is obviously missing). Just west of the Altstadt, St Nikolai was the parish church of Luckenberg, a village which was abandoned in 1295; it was built between the 1180s and 1230, with a tower added in 1467, burnt down in 1945 and rebuilt (the brick east end survives from the twelfth century).

There’s a massive change of gear when you cross Neuendorfer Strasse from St Nikolai – house no.89A was the local outpost of the NKVD, the Soviet secret police, in 1945-6, and  immediately to the east on Nicolaiplatz (yes, they spell it both ways) is the chilling Gedenkort Opfer der Euthanasie-Morde or Memorial Site for the Victims of Euthanasia Murders. The Nazis came to power in 1933 and that same year opened their first concentration camps, including one here; in 1939 this became the Brandenburg Euthanasia Centre where they killed the mentally ill, developing the use of gas chambers that were later scaled up for mass murder at camps such as Auschwitz. Four information pillars stand on the site of the gas chamber and there’s a small museum (closed Mon-Wed, free).

By the river behind the Memorial Site is the Slawendorf, a reconstruction of an eleventh-century Slav village which opens at weekends and which, intriguingly, offers overnight accommodation in a hut (with, I assume, twentieth-first century toilet facilities). Given that Hitler also despised the Slav races, the location is perhaps not inappropriate.

But of course, for many people, Brandenburg means Bach concertos, although there’s no direct link with the city – Christian Ludwig (1677-1734), Margrave of Brandenburg, ran the Prussian court orchestra because his brother, King Friedrich Wilhelm I of Prussia, the ‘Soldier King’, had no time for the arts; he heard Bach playing the harpsichord in Berlin in 1719 and asked him for some music. Johann Sebastian didn’t compose anything new but personally copied out the scores of six concerti grossi and dedicated the collection to the margrave. In fact they were not performed, probably because the orchestra wasn’t up to it, and he was not paid; the scores were only rediscovered in the Brandenburg archives in 1849 and published the following year. Mendelssohn, who was essentially responsible for rescuing Bach from obscurity, didn’t perform them, and then the manuscript was almost lost again in World War II when a train taking them to a safe location was attacked by planes. It was probably the recording by the exiled German violinist Adolph Busch in 1935 that brought them to their present position as some of the greatest (and most popular) musical works.

Magdeburg is a city I’ve never stayed in overnight, but a couple of times I’ve gone from the station to the Dom (the Lutheran cathedral) and back; it’s still seen as a gritty industrial city that hasn’t changed much since the communist era. The old town is under a kilometre east of the Hauptbahnhof, on the banks of the Elbe river; try to go via the Roman Catholic cathedral in one direction and the Green Citadel in the other. The Catholic cathedral was founded in 1015 as the church of St Sebastian and rebuilt in 1150-70 as a Romanesque basilica (the west end and towers survive) and in the fifteenth century as a Gothic hall church. It was damaged in World War II and has since acquired modern stained glass and a fine pair of bronze doors; there are also some fine painted wooden altars. The Green Citadel was built in 2004-5 to designs by the eccentric Viennese artist/architect Friedensreich Hundertwasser (who died in 2000 on a cruise on the QE2) – it’s a self-consciously wacky block of apartments, shops and a small hotel, wavy-sided and topped with trees and golden balls. 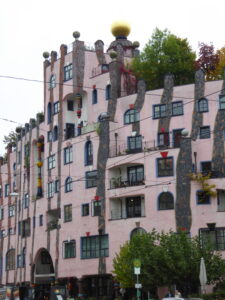 Just north of the Dom, the Church of Our Lady has not changed much since the eleventh century; it’s part of a Romanesque monastery that now houses the state of Saxony-Anhalt’s main museum of contemporary art; unfortunately it was closed for refurbishment but should (Covid-19 permitting) re-open in March 2021.

The Dom itself is the oldest Gothic cathedral in all Germany, the largest in eastern Germany and, with one steeple just over 100 metres in height (and one just below 100 metres) one of the tallest in eastern Germany. Construction began in 1209 and was completed in 1520 – just a few years before it was taken over by the Lutherans. It’s the burial place of Otto the Great (the Holy Roman Emperor Otto I 962-973) and his wife Edith, Alfred the Great’s grand-daughter (and isotopic analysis of her bones has proved that she grew up in Wessex). 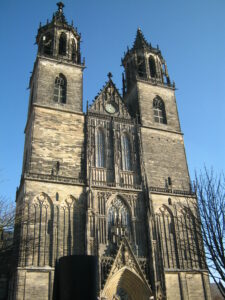 The cathedral was sacked during the Thirty Years War, and the stained-glass windows were destroyed; it was not too heavily damaged in World War II, except that the replacement windows were also destroyed. There are many fine memorials to local worthies and other valuable sculptures, as well as the Magdeburger Ehrenmal (Magdeburg Cenotaph) by Ernst Barlach (1929), an obviously anti-war war memorial that was controversial when it was installed and was removed during the Nazi period. Running south from the cathedral, Hegelstrasse is lined with grand buildings built between 1880 and 1914, with ornate stucco façades that are worth a glance.