We found Ho Chi Minh City (Saigon) a hectic noisy place without a great deal to see or do. Yes, it has a high energy level, reminiscent of Bangkok and mostly felt through the swarms of scooters buzzing around which make every road crossing perilous, and it does have some nice colonial buildings, although the only one of real interest is the General Post Office (1891), with its roof supplied in prefab form by the Eiffel company. 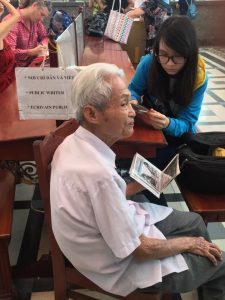 I found it particularly interesting to find a Public Letter Writer working there! Duong Van Ngo was born in 1930 and started work at the Post Office at the age of eighteen, reputedly without ever taking a day off. He writes by hand using a fountain pen. Not sure how much writing he does these days as he seemed to be more of a tourist attraction, but am told he is up for a conversation about his experience if you have time!

Other colonial piles now house museums – we found the Ho Chi Minh City Museum, in the former palace of the governor of Cochinchina (1886), not very good and poorly presented (although the displays upstairs on ‘the American war’ are better), while the History Museum had a good collection of sculpture, including some of the oldest wooden Buddhas in Southeast Asia (from the 7th and 8th centuries). The Fine Arts Museum was definitely better than expected; it’s housed in the very grand mansion of a Chinese businessman (1934) and two adjacent buildings of much the same period (the main building still has its original little lift, the oldest on Southeast Asia and still in working order), and displays a varied and interesting range of work.

The paintings in lacquer on wood were particularly effective, and not something we’d seen in adjoining countries. Nor is there a lot of cheap revolutionary cliché, although military scenes are certainly well represented. The third building also displays Champa sculpture from the 7th century on, the precursor of the wonderful Khmer sculpture of the Angkor temples and very fine in its own right.

The city’s busiest, and best presented, museum is the War Remnants Museum, which does display plenty of weapons, from bullets up to tanks and a Chinook helicopter, but is more an indictment of the crimes of the imperialist invaders (start on the top floor with the French, then the rest of the museum is of course concerned with the Americans) and their South Vietnamese proxies. The photos of the effects of Agent Orange (a defoliant containing lethal amounts of dioxin) are particularly appalling, but there’s also balancing coverage of worldwide protests against the war and support for the Vietnamese. There’s also a gallery of striking photos by war correspondents, including the last photos taken by the great Robert Capa before he stepped on a landmine in 1954. Alongside the museum is a display on the island prisons of the South Vietnamese regime, which shows disturbing similarities with Phnom Penh’s Genocide Museum. The lunchtime closure is a bit annoying, although there’s still access to the café (with wifi and power sockets).

The visa on arrival system works far less well than in Laos and Cambodia – having paid US$17 online and received pre-approval for my visa, I still had to wait an hour at Ho Chi Minh City airport, with scores of others milling around, and paid another US$25, to actually receive the precious stamp (full-page, of course) in my passport. Typically communist bureaucracy. It’s only available arriving by air, which does give some confidence that you probably won’t be turned back. You only need one photo, not two as stated online, and they’ll take one if you don’t have any.

When I changed money I instantly became a millionaire, due to the three excess zeroes on the currency. On the other hand there are no coins, as in Laos and Cambodia, and banknotes are now made of polymer.

A metro is under construction, and due to open in 2019, with luck; there’s also a decent bus network (not much used by tourists, it seems, although it does serve the railway station and the airport). Taxis are everywhere and can easily be flagged down; they use meters and you shouldn’t pay much more than 160,000 Dong (£6) to get from the airport to the centre (District 1) or 60,000 Dong to cross the centre. The most reliable companies are Mailinh (green) and Vinasun (white). I do believe that no driver elsewhere in the world knows the width of his vehicle as accurately as a Ho Chi Minh City taxi driver, weaving through the traffic with pinpoint accuracy. However most locals get around on scooters, and it’s astonishing how much space is given over to storing them, both public (on sidewalks etc) and private (in the front rooms of houses, for instance).

Trains can now be booked online at www.baolau.com – you’ll have to show the booking on your phone or other digital device at the information counter and a boarding pass will be printed out. Even the four-berth soft sleeper carriages are old and communist in feel (and Katy spotted a cockroach), although they have been upgraded with air-conditioning and electric sockets, and the track is still pretty rough; it’s a long two-night haul from HCMC to Hanoi, but the shorter runs from HCMC up to Danang (17 hours) or from Hué to Hanoi (13 hours) are worth considering for their views of Vietnamese life, both on the train and in the countryside outside.

We happened across two excellent places to eat. The Hoa Khai vegetarian restaurant at 124 Nguyen Cu Trinh was reassuringly busy, with lots of locals coming and going; there’s no fancy décor but the atmosphere is totally authentic. There’s lots of ‘pork’ and ‘chicken’ on the menu, but it’s all fake (made with synthetic protein); there are plenty of mushroom dishes too and it’s all tasty.

It’s well worth making the effort to find the Secret Garden at 158 Pasteur. Walk into the alley – on the left is a doorway to a dilapidated apartment building above which is a small restaurant sign. Go up the stairs and five grotty/smelly flights later (keep going – it’s worth it!) you’ll emerge onto a charming leafy roof terrace which would be particularly lovely at sunset. We ate a delicious traditional Vietnamese lunch alongside fellow locals and a handful of other tourists and benefitted from the cooling fans overhead.  The veggie options were good and the décor was lovely too! 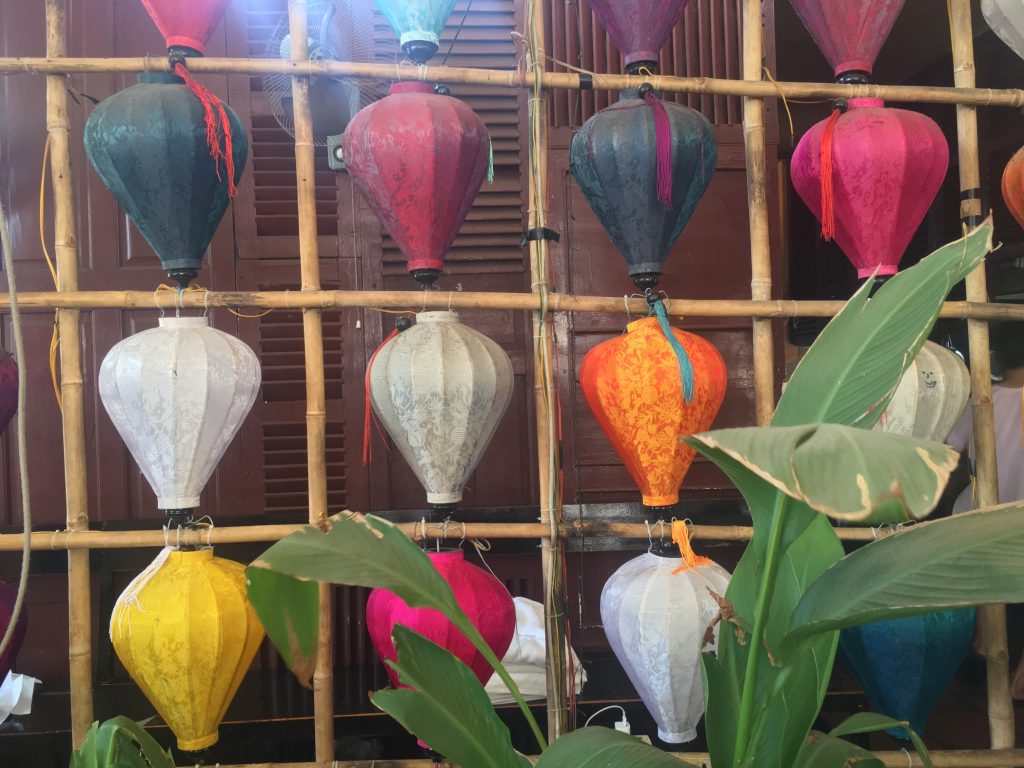 We use AirB&B fairly frequently and I like to research quirky and cheap places to stay. We discovered a gem! Tucked away behind a small alley, but conveniently located, is a bookshop previously called Kafka. They have three rooms upstairs. Ours was ensuite and simple, clean and quiet with air con and a fan. We paid £10 each for the night. 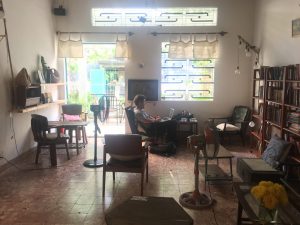 You can relax in  the common lounge and drink Vietnamese coffee whilst using their wifi. Tim prefers tea and they gave us access to the kitchen to make his own. The very helpful James looked after us and provided us with a rudimentary map. (Access help pictures below!)