I recently took a cycle trip along the coasts of Kent and East Sussex, starting in Canterbury, going north to Whitstable and largely following the sea-wall from there – it’s a largely traffic-free route as far as Rye, which makes a lovely two- or three-day excursion. And there are interesting towns every hour or two, which appeals to me more than just crunching the miles.

Canterbury was the capital of the Cantii, a Celtic people who, as you might expect, occupied what is now Kent; the Romans called it Durovernum Cantiacorum, and it then became the capital of the Saxon kingdom of Kent. It became England’s’s ecclesiastical capital due to the arrival of St Augustine in 597 to begin the country’s conversion to Christianity. The cathedral still dominates the centre, at the heart of a religious complex that’s less permeable than the Vatican or Kremlin. To get close, you have to pay £14, or attend a service – morning prayers are pretty austere, held at the far end of the crypt, but you can then wander around the cathedral, whereas choral evensong is more interesting but you won’t be allowed to linger for long. 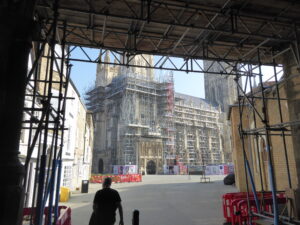 In 1170 Augustine’s successor Thomas Becket was murdered in the cathedral by four knights incited by Henry II, partly because he resisted the king’s view that the church should be under his control; so it’s no surprise that Henry VIII, who definitely did want the church under his control, tried to wipe out all evidence of the martyrdom cult that had developed and had led to Canterbury being a major destination for pilgrimages. It was also the starting point of the Via Francigena, the pilgrim route to Rome that I recently cycled part of. Nevertheless Thomas is now a saint in the Anglican church as well as the Roman Catholic one, and the site of his death (known as The Martyrdom), in the north transept, is marked with a new altar, installed in 1986, beneath a metal sculpture of a cross and two swords.

The stained glass images of the Ancestors of Christ, in the Great South Window, are mostly from the late twelfth and early thirteenth centuries, but recent research suggests that some pieces may pre-date the great fire of 1174, which would make them among the world’s oldest examples of stained glass. There are also some interesting similarities with Cambridge, as the central tower was built (from 1491) by John Wastell, who went on to build the fan-vaulted roof of King’s College, Cambridge. 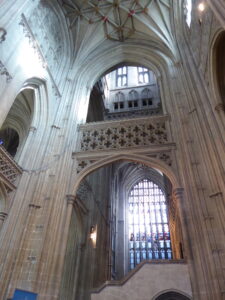 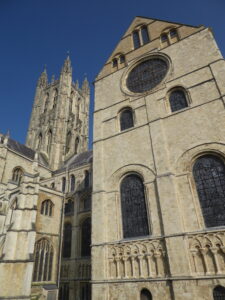 Not far away are the ruins of St Augustine’s Abbey, outside the cathedral precincts but enclosed this time by English Heritage. Founded by Augustine in 598, this became one of the great Romanesque abbeys of Europe (and possibly where the Bayeux Tapestry was created), but was destroyed by Henry VIII, who else. A bit further from the centre is St Martin’s church, thought to be the oldest church in Britain that’s still in use – some of the stonework survives from a Roman building used as a church from 597 by Augustine and Bertha, the French Christian queen of Kent. The nave was built in about 600, with the east end and tower added between the twelfth and fourteenth centuries. It’s hardly ever open, but you can clearly see the different types of stonework on the south side. A few days later, in Lydd, I came across the second-oldest church in Britain that’s still in use, also with Romano-British stonework – but of course there’s no comparison with what I was seeing in Rome and Ravenna just six months previously.

Up against the Roman walls in the southwestern corner of the city (near Canterbury East station – go figure), the Dane John is a Roman burial mound that became the motte or base for the keep (or donjon – whence the name) of the first Norman castle. This didn’t last long, and in 1123-35 a second castle was built just to the north; this has been closed since 2018 due to falling stonework, ie after nine hundred years it’s been abandoned due to our government’s wonderful austerity policy.

There are many other fine medieval buildings here, from churches and city gates to half-timbered inns, but one which caught my attention was the Hospital of St Mary of the Poor Priests on Stour Street, founded circa 1220 and rebuilt in 1373; the hospital closed in the 17th century and the building was then used as a workhouse, a school, a police station and then as the Canterbury Heritage Museum, until it closed in 2017. Now it houses The Marlowe Kit, the studio space of the Marlowe Theatre (the main theatre is a decent modern building opened in 2011) – the name is a pun on Christopher (‘Kit’) Marlowe, Shakespeare’s great rival, who was born in Canterbury in 1564. A few days later, in Rye, I came across the birthplace in 1579 of Shakespeare’s collaborator John Webster.

The Canterbury Heritage Museum may have closed, but there’s still a Roman Museum, and what is known as The Beaney (The Beaney House of Art and Knowledge, in full), incorporating the former Royal Museum and the Beaney Institute (opened in 1899), with educational spaces and the city’s library and tourist information centre. I couldn’t quite pin down why I liked it, but the seemingly random mix of displays is actually well thought out. There are lots of interesting items from around the world brought back by travellers from Canterbury, such as clubs from Nootka Sound, acquired during Captain Cook’s second voyage, and Indian pieces from Stephen Lushington (1776-1868), who was MP for Canterbury and Governor of Madras, sometimes at the same time – Jane Austen wrote ‘I am rather in love with him. I dare say he is ambitious and insincere.’ 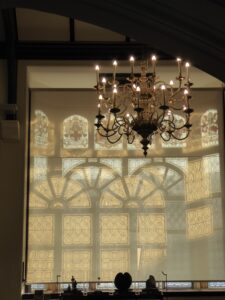 One small gallery covers the output of the Smallfilms animation studio (run by Oliver Postgate and Peter Firmin), including children’s classics such as Ivor the Engine, Noggin the Nog, Clangers and Bagpuss. There’s also quite a lot of decent art, both in a gallery and mixed in with other displays – a Virgin and Child by the workshop of Perugino (late 15th century) and a Baptism of Christ after Perugino (circa 1700) and others attributed to van Loo and Van Orley, as well as actual  authenticated works by Aert van der Neer, van Dyck and Gainsborough, plus several Murders of Becket, including one by Opie. Twentieth-century art includes works by Lucien Pissarro, Walter Sickert, Laura Knight, John Bratby, Gillian Wearing and Elizabeth Frink. The gallery next to the main entrance is devoted to TS Cooper (1803-1902), a local icon who spent his life basically painting cows (the last at 99 years of age) – I was largely unmoved, but there is one view of Canterbury cathedral across the meadows that’s reminiscent of Constable’s views of Salisbury.

Canterbury is now a student town, but it’s a younger more arty crowd than I’m used to in Cambridge, with lots of dyed hair and ripped jeans. The ‘historic’ university (founded back in 1965!) is the University of Kent at Canterbury, somewhat isolated on a hill north of town (above the world’s first railway tunnel, completed in 1826, as it happens), but Canterbury Christ Church University is far more visible, with multiple buildings in the city centre – it was founded as a teaching training college in 1962 and became a university in 2005 (without passing through a polytechnic phase). And Canterbury College is now part of the University for the Creative Arts (which has several other campuses across Kent and Surrey).

There’s the odd decent restaurant and pub (eg the Parrot and the Dolphin, both on St Radigund St – which is a surprising link with Cambridge) but really I only want to mention the Goods Shed (closed on Mondays) next to Canterbury West station (the one north of the centre) – it’s a fine farmers’ market with a great café and restaurant and other stalls such as Cheesemakers of Canterbury, Docker (sourdough and craft beer) and the splendid traditional Butchery (and you won’t hear me say that very often). 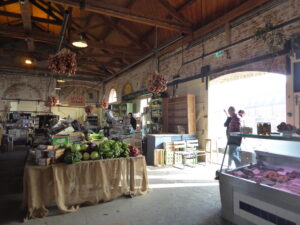 Don’t get me started on Canterbury’s rail links – perfectly functional, but very confusing for historical reasons. There are two stations, Canterbury East (which should really be called Canterbury South), on the Faversham-Dover line, and Canterbury West (which should really be called Canterbury North), on the Ashford-Ramsgate line. Both have trains from London Victoria, which set off claiming to be heading for Dover, Ramsgate or Margate, but in fact continue on a couple of loop routes around Thanet returning to Victoria (with route announcements changing as they proceed). Then in 2009 a High Speed service was added, using the HS1 Channel Tunnel line from London St Pancras as far as Ebbsfleet or Ashford, from where they also take a loop around Thanet, some calling at Canterbury West – so if you don’t mind paying the surcharge for this service, the hourly Ramsgate via Ashford High Speed service is the fastest way to get here. Therefore it’s possible to get a train to Canterbury from almost everywhere on the Kent coast – with the exception of Deal and Sandwich which are reached from Canterbury only in the rush hours (change at Ramsgate otherwise).

I headed north on the Crab and Winkle Way, the northern half of which follows the route of the Canterbury and Whitstable Railway (known as the Crab and Winkle) – this was the world’s first passenger railway, opened in 1830, four years before the Liverpool and Manchester Railway. Because the C&W didn’t use steam engines throughout (static winding engines hauled the trains up a couple of hills), the L&M has become more famous, but its claim to be the first passenger railway is a bit weak. The southern half of the Crab and Winkle Way actually follows the Saltway, a far older trading route from the salt pans of Seasalter, just west of Whitstable. The route passes through The Blean, a large area of largely intact ancient working woodland that now includes an enclosure for European bison (which I didn’t see).

The old fishing town of Whitstable was a popular escape from London for the more bohemian element long before high-speed trains opened up places further east such as Margate. It was known above all for its oysters (from Roman times) and whelks (not winkles, from the nineteenth century), and still has some gastro options, as well as excellent micro-pubs. Britain’s first micro-pub, in 2005, was actually the Butchers Arms, just to the east in Herne Bay, and Kent still has more of these tiny delights than anywhere else. 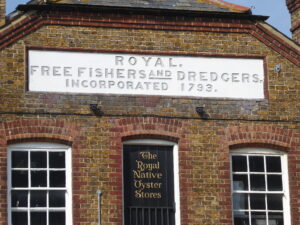