There’s been a lot of talk recently of the problems of ‘overtourism’, with vigorous protests in places like Barcelona and Venice against the hordes who flood in, cause residential accommodation to be converted into Airbnb lets and hostels, get drunk and generally behave disgracefully, forgetting that their destination is somebody’s home, not just a playground. It’s particularly galling in the month that Tourism Concern, the UK charity that has done so much to bring this issue to public awareness, ceased operations (who knows how long their website will remain live?). I supported TC as a member for the best part of twenty years, but membership revenue was never enough to keep it going and in these hard times grants have also dried up. With any luck the issue now has enough traction with journalists and opinion-formers for it to remain in the public eye.

Just to recap – since 1995, the number of tourists worldwide has more than doubled, from 550 million to 1.3 billion in 2017, according to the World Bank. International tourist arrivals increased by 7% in 2017 and are expected to continue growing at 4-5% pa. This boom is driven above all by the growth of the global middle class, currently standing at around 3.7 billion, and growing by another 160 million annually (above all in China and India, of course), as well as by the preference of young people now to consume experiences rather than things. It’s fuelled by cheap air travel and cheap cruise holidays, which dump thousands of people at a time in one place, and by social media – there now seems to be a very consumerist attitude to travel, which doesn’t actually happen until it’s been Instagrammed. There’s no doubt that tourism in general is a force for good, in terms of education and international understanding, and in economic terms (it accounts for 10% of world GDP), so no-one wants it to go away altogether, but many destinations are being overwhelmed, while there’s potential to shift some of the load to nearby alternatives.

Another game-changer has been the growth of AirBnB, which has created a lucrative new market for itself (gross sales of US$14.4bn in 2016) and for home owners. It’s getting a lot of criticism too, for undermining the hotel industry and driving down wages, for disrupting local housing markets and changing the characters of neighbourhoods, and above all for avoiding taxes, and enabling renters to avoid taxes. Little by little, cities across the world are requiring AirBnB properties to be registered so that they can only be rented out for limited periods and taxes can be levied. This has happened in Barcelona, where a new mayor was elected specifically on a platform of cracking down on illegal short-term rentals, in Portugal, where Lisbon and Porto suddenly became Europe’s coolest destinations and property prices rocketed, and in Amsterdam, where the tax on budget hotels, widely seen as swamping the city centre, is also being raised by 20%. Elsewhere, tourist taxes are being increased, as are entry charges – Angkor Wat almost doubled its just before we got there last year – and in Thailand and the Philippines overloaded islands and beaches (including THAT one where they filmed The Beach) are simply being closed. Mustang in Nepal is opening up to tourists but with a fee of US$500 per person.

I live in Cambridge (UK), where tourist numbers have grown by two million in just three years, from 5.4 million in 2013 to 7.6 million in 2016 – and there’s a general perception that they mostly get off their buses for an hour or two, clutter up King’s Parade and spend virtually no money. Cambridge is notorious for having almost no hotels anywhere near the centre, so in a way it’s not surprising – but many problems are also being reported with AirBnB properties too. It’s interesting that we are also dealing with a newly identified problem labelled as ‘over-studentification’ – with full-time student numbers in the UK up 660,000 in the last 20 years there is high demand for student HMOs (houses in multiple occupation), which has caused some communities to be virtually obliterated. In response new accommodation blocks have been built and suddenly the areas that had been taken over by HMOs are abandoned. Doesn’t everything move absurdly fast in today’s world?

However, I’m now in Uzbekistan, a country that is interested in developing its tourism industry – and with Silk Route cities such as Samarkand, Bukhara and Khiva as key attractions, there’s obviously plenty of potential. To their credit, the government is looking at the rather headlong growth of tourism in Georgia (which of course is covered by my Bradt guidebook and some blog posts), where visitor numbers rose from 2.8 million in 2011 to nearly 7 million in 2017, and the infrastructure has been struggling to keep up – what’s more, there’s a real fear that Tbilisi in particular has lost a little of what made it special, and – more importantly – there’s the beginning of a backlash from residents. I don’t altogether miss the times in the 1990s when there was absolutely no street lighting in the city so that even where there were signs with street names you couldn’t see them, and in any case you had to worry a bit more about being bopped on the head with a steel bar – but still the city is less ‘authentic’ (whatever that means) than when I first knew it. Outside Tbilisi and a few well-known spots, things have changed less.

In Uzbekistan there’s pressure to abolish the visa system altogether (as in neighbouring Kyrgyzstan and indeed Georgia and Armenia), but the government seems to be taking it one step at a time, starting with an e-visa system for most of the developed Western countries. Having said that, they did just abolish visas for French tourists a week before the president went on a state visit to France… As I said in my previous post, I’d much rather they abolished the registration system, which is pretty pointless now it’s legal to stay with Uzbeks in their homes, and they don’t bother looking at the registration slips when you leave the country.

New hotels are being built, and I was very impressed by those in central Bukhara, where modern buildings blend beautifully with their historic settings. In Samarkand they’re being much more gung-ho with their new constructions, alas. The Uzbek railways are seeing a huge amount of investment, with Spanish high-speed trains running from Tashkent to Samarkand, Shakrisabz, Bukhara and perhaps in 2019 to Khiva, as well as a new line to the Fergana region. Booking tickets is still a bit tricky, especially as some of the longer-distance trains don’t run daily, and when they’re full they’re full – there are no tickets for standing passengers. There are more ATMs than a few years ago, although they do tend to be hidden away in hotel lobbies – and this is still very much a cash economy, with little opportunity to let your card take the strain. They very much need to improve internet access, and happily I hear that Korean technology is to be brought in to do that.

There is one rather worrying thing, however, which is that the authorities are rather too keen to demolish their old towns to create park-like promenades to lead tourists from one ancient mausoleum or madrassa to the next – maybe one day these will look natural and lived-in, but at the moment one is just aware of a huge loss of context and authenticity. That said, I’m told that residents are perfectly happy to be transferred to modern housing in the suburbs. Shakhrisabz is the most notorious example of this (there’s a photo here), but even tiny Nurata now has a rather sterile park between the mosque and a grand new hotel (which it did need). In Samarkand a main road north from the Registan has been nicely pedestrianised, but the neighbouring Jewish quarter was actually walled off (there’s a photo at the end of this post). The Gur-i-Amir, the lovely mausoleum of Timur in Samarkand, was left horribly isolated and shorn of its urban context when the surrounding houses were replaced by a park. Construction is also under way on Tashkent City and Samarkand City, two glitzy new developments of skyscraper hotels and business centres, and during the presidential visit to France mentioned above, the French company Bouygues was given a contract to build a new hotel complex on the edge of Bukhara.

I hope we won’t be looking at Uzbekistan in a few years saying ‘it used to be so great, but now it’s ruined’. There’s a lot to be said for going slowly.

PS the main station in Tashkent is to be refurbished, so they’ve built the new Tashkent Yuzhniy (South) station (below) – international trains still use the main station (which is handier because it’s on the metro) while most domestic trains use the South station. The high-speed Afrosiab trains are currently using the main station but are, I gather, set to switch to the South station. Check your tickets carefully, as nobody bothers to tell you where you need to be, and the trains only call at one even when they pass through the other. 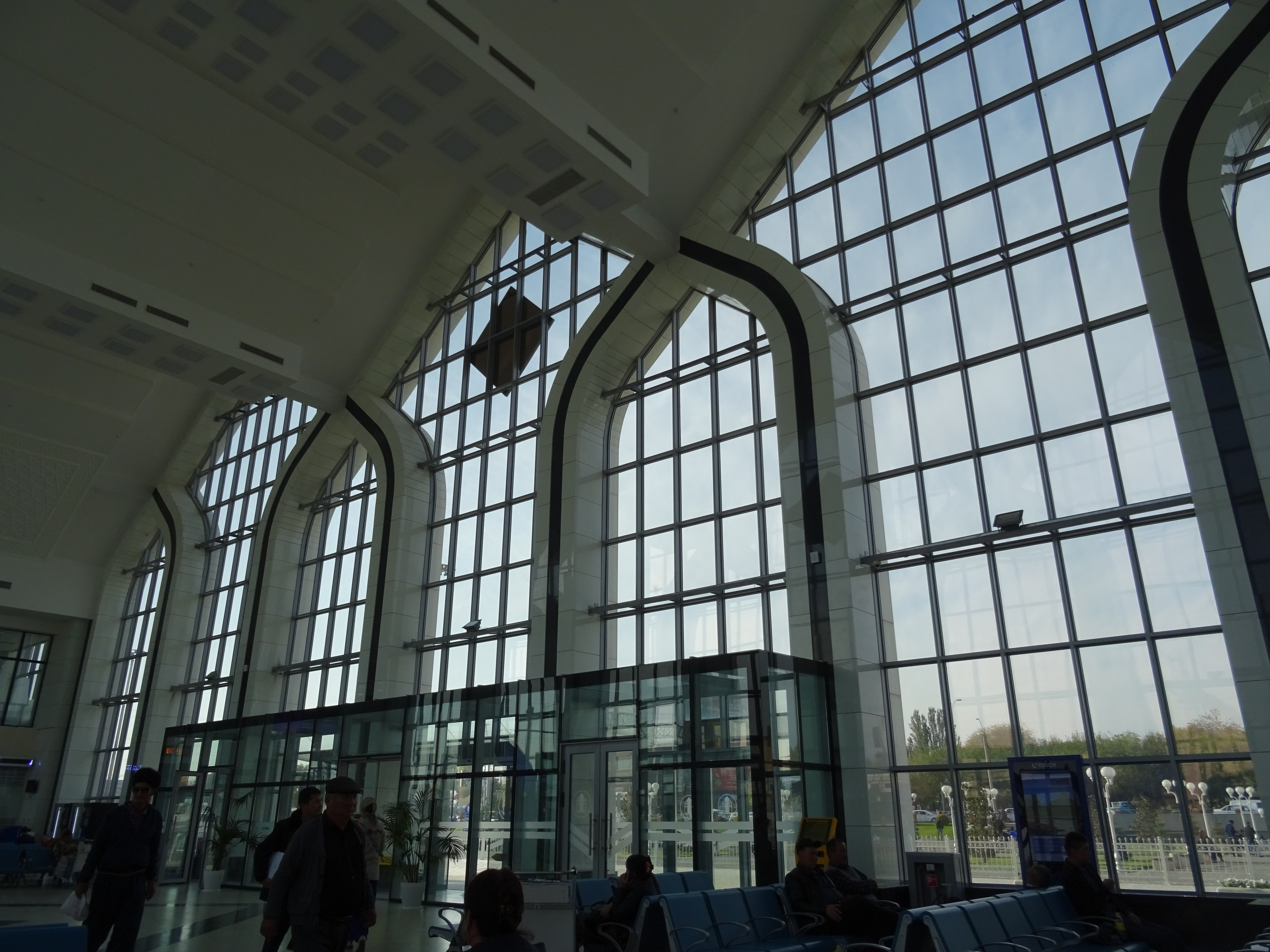