I like Singapore – it’s clean and efficient (if a bit hot and humid) and the people are friendly, businesslike and go-ahead. But I have to say, it’s changed a lot since I was last here in 1983 – for one thing, it’s literally grown 100 square kilometres in size since then, thanks to land reclamation at Changi airport at its eastern tip, at the Jurong industrial zone to the west and, most obviously, at Marina Bay immediately south of the historic city centre. The close-packed skyscrapers around the Downtown MRT (subway) station have only been there a few years, and there’s much more to come. The aim is for the island-state to be the size of New York City (789 square kilometres) by 2030.

Singapore’s amazing growth was built in the 1960s and ‘70s on manufacturing, then it moved into finance and transport (it’s the world’s second busiest port and busiest transhipment hub, with a ship arriving or departing every three minutes, and 1,000 vessels in port at any time), and recently it has decided to also establish itself as a tourism centre and also as a cultural hub for the region. On the downside that means it’s allowed two casinos to be established (each with a fairly poor museum set up as part of the deal), but on the other hand a huge amount of public money has gone into culture and beautification. A large chunk of Marina Bay (just over 100ha) has been used to create Gardens by The Bay, a public park with a difference, notably its artifical SuperTrees, huge sculptural forms with creepers growing up them and solar panels that light them up at night in a variety of crazy colours. There are two biodomes that you have to pay to vist, and a 128m-long Skywalk between some Supertrees, but otherwise this is free (5am-2am). There’s a 3.5km pedestrian route around Marina Bay, incorporating the high-tech Helix Bridge (although this and the Jubilee Bridge, also on the trail, are rather devalued by being alongside busy roads); it links to the 8km Jubilee Walk, created in 2015 to celebrate the 50th anniversary of Singapore’s full independence, which follows the Singapore River from the bay to Fort Canning Hill, passing many historic buildings that have recently been repurposed for cultural activities.

The most impressive of these are right on North Boat Quay, in the heart of the Colonial District, notably the Court House (1867), which re-opened as the Asian Civilisations Museum in 2003, the Old Parliament House (1827), which became The Arts House after the current parliament opened in 1999, and the Town Hall (1862), which became the Victoria Theatre and Concert Hall in 2014. Immediately behind is the grandest of them all, the National Gallery Singapore, created in 2015 when the Supreme Court (the last of Singapore’s huge Neoclassical edifices to be built, in 1939) and the City Hall (1929) were linked by a modern atrium, giving access to the basement ticket desks and as far up as the rotundas and the roof terrace (don’t miss the great views over the Padang, the grassy expanse in the middle of the Colonial District). It houses a good spread of Singaporean art (first by Europeans, and then largely by Chinese artists until the 1970s, including some fine woodblock prints) and also comparative displays by artists from across South-East Asia, a good idea but slightly unfocussed.

Across the river to the south, the massive Fullerton Building was built in 1928 as the General Post Office, where virtually all the mail between Europe and Australasia was sorted, and was converted to a luxury hotel in 2001; it’s very imposing, but right next to it is the more charming Fullerton Waterboat House, a lovely piece of Art Deco from 1949 that’s now a restaurant. It’s so called because the main supplier of drinking water to ships in the harbour was based here.

The excellent Singapore National Museum was actually built as a museum, in 1887, but was also revamped for the Jubilee, with a new atrium and a children’s wing – it’s on the north side of Fort Canning Hill, at the inland end of the Jubilee Walk. Nearby, and also well worth looking out for, is the Peranakan Museum, built as a school in 1906-12, which opened in 2008 to commemorate the culture of the people who were known as Straits Chinese (and as Baba-Nyonya) last time I was here – the community formed since the 15th century by Chinese traders who settled here, in Melaka and Penang and across the wider region, and intermarried with Malays. Their furniture and other artefacts, in particular, are of very high quality.

There are also heritage centres dedicated to the Chinese Indian and Malay communities, in the hearts of Chinatown, Little India and Kampong Glem respectively, three areas of two- and three-story shophouses that are now conservation areas amid the city’s modern skyscrapers. Shophouses, with accommodation above and behind a shopfront, originated in the 1840s, but many of the most spectacular ones date from 1900-40, with some fine Art Deco examples from the 1930s-60s. The centre of Chinatown is now horrendously crowded and touristy, but it’s worth pushing on south to Neil Road (also the place for Korean restaurants) and Blair Plain, to see terraces of shophouses that now house cool coffee houses and boutique guesthouses. The Baba House, at 157 Neil Road, was opened in 2008 by the National University and gives a fine insight into Baba-Nyonya culture, although this is now a less attractive  stretch of Neil Road.

Opened in April 2015, the Lee Kong Chian Natural History Museum claims to be the newest museum in Singapore, but the Indian Heritage Centre actually opened a month later, and in any case it inherited its collections from the Raffles Museum of Biodiversity Research, which dates back to the original donation by Sir Stamford Raffles, founder of Singapore in 1819, to create a general museum for Singapore.

A non-governmental museum project – but seemingly just as well funded – is the Buddha Tooth Relic Temple and Museum – occupying a whole block of Chinatown, this was established to house a tooth of the Buddha found in Myanmar and donated in 2002 for safekeeping. Opened in 2007, the temple is largely in 7/8th-century Tang style, but the upper floors house a surprisingly good museum (free, and air-conditioned, of course) that tells the story of the historic Buddha along with an 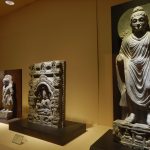 excellent selection of sculptures, including quite a few from Gandhara. I first came across these 2nd- and 3rd-century Buddha carvings in Pakistan in 1983, and have loved them ever since for their Oriental spirituality allied with an oddly Greek style, especially in the clothing. It’s also worth mentioning the ‘vegetarian dining hall for charity’ in the basement.

Another private venture is the Singapore Art Museum, opened in 1996 in a former mission school (1855 to 1990), which aims to be the regional centre for contemporary (edgy) art.

Finally, there are fifty World War II sites dotted about the island, twenty of them with plaques put up either in 1995 (the 40th anniversary of liberation) or in 2012 (the 70th anniversary of the Fall of Singapore). The Ford Factory at Bukit Timah, where the British surrendered in 1942, is apparently interesting, but is closed for renovation; otherwise I found Reflections at Bukit Chindu excellent (and the Canopy Walk at the start of the Southern Ridges Trail is right opposite the gate – see my next post, on natural Singapore). This is where soldiers of the Malay Regiment, founded only in 1933, put up heroic resistance to the Japanese on 14 February 1942, as they closed in on the city and pressed for a British surrender, which came the next day.

The Singapore Museum Guide, published in January 2016, includes virtually every little museum in town but, oddly, not the National Gallery; virtually all museums are free for Singapore citizens and residents, but others will pay around S$20 (£11) – don’t hesitate, these are easily the best museums in the region, with very professional standards of presentation.

Singapore does, of course, have an excellent public transport system, with two companies operating a fully integrated system of buses and MRT trains. Most signs and notices are in English (but stations all have numbers, such as CC1 to CC29 (so far) on the Circle Line) and there are squeaky-clean public toilets at most stations. If you’re around for more than a day or so, you should buy an EZ-Link chip-card which costs S$5 (non-refundable) and can store as much credit as you want – and this can be refunded. With the EZ-Link card journeys are far cheaper than with the ‘standard’ ticket, a card with a chip which can store anything up to six trips; there’s also the Singapore Tourist Pass, which comes loaded on an EZ-Link card and gives free travel on MRT, LRT and basic bus services for up to three days (S$10 for one day, S$16 for two days and S$20 for three days). There’s a S$10 deposit for this which will be refunded if you return the card within five days of purchase, or you can simply top it up and use it like a regular EZ-Link card.

The MRT is undergoing a major expansion programme at the moment, aiming to double the system’s length by 2030, including a new 50km Cross Island Line from Changi to Jurong just north of the city. In the second quarter of 2017 the East-West Line will be extended west from Joo Koon to Tuas Link (adjacent to the Second Link to Malaysia), amd later in 2017 Stage 3 of the Downtown Line will open from Chinatown to Expo, out east near Changi Airport. In 2023 the North East Line will be extended 1.6km from Punggol to Pinggol Coast, to serve a new Digital District. It’s worth mentioning that the Circle Line will actually be a circle from 2025 when the 4km missing link from Marina Bay to Harbourfront, via Cantonment and Keppel, will open.

Singapore has an unspoken social contract – the infrastructure has to run well (for instance signal failures on the MRT are unacceptable) to compensate for loss of freedoms, if people are going to continue supporting the governing party – so the 2011 elections, when the opposition won six seats, came as a shock and forced the government to get a grip – it is now taking back control of the MRT stations, track and trains, and the operators will provide only the passenger services.

Given that public transport is so good, why do so many Singaporeans drive at all? From the 1960s to the 1980s Singapore built a system of expressways before realising that they were simply generating traffic. The first MRT line opened in 1989 (with the North-South and East-West lines both opening in 1990), and in 1990 the Vehicle Quota System was introduced – this limits the number of cars in Singapore by means of public auctions, twice a year, for a Certificate of Entitlement allowing one to own a car for a ten-year period. Currently this costs about S$5,000 (£32,000), although it has been twice as much, and on top of that cars are heavily taxed. There’s also Electronic Road Pricing (a congestion charge) to pay. The odd effect is that Singaporeans buy more top-end cars and SUVs than most other nations, because you might as well go the whole hog if you’re spending that sort of money, and it doesn’t seem very much more overall – and then of course having spent so much they’re impelled to use the car as much as possible when the MRT might well be easier. So the expressways are still ridiculously busy.