Malaysia has five sites on UNESCO’s World Heritage List, but it’s the two urban ones of Melaka (Malacca) and Georgetown (on the island of Penang) that attract most interest and visitors. I called in on both on my way from Singapore to Bangkok, and found both interesting and enjoyable, in different ways. (I visited them both, and one of the other sites, in 1983-4, but don’t remember a great deal!)

Melaka is by far the older of the two, having been established as a fishing village by the 13th century. Around 1400 Parameswara (also known as Iskandar Shah), the Raja of Temasek (now Singapore), settled here, having been driven out of Singapore by invaders from the south. His successor converted to Islam, and Melaka became a centre for trade with India and Arabia, and also a centre for Islamic scholarship. Due to the monsoon patterns Melaka was busy with ships from December to March and from May to September – its fine natural harbour allowed almost 2000 ships at a time to wait, for months on end, for the winds to allow their onward journey. It was so prosperous and respected that it gave its name to the whole Malay peninsula for a while. In 1511 (after two failed attempts) the Portuguese captured Melaka, aiming to make it the hub of the Asian spice trade; however their anti-Islamic attitudes drove traders elsewhere (for instance, to Brunei). In 1528 the descendants of the Melaka sultans established the new sultanate of Johore-Riau-Lungga-Pahang, which had no permanent capital, but eventually in the 18th century became the Sultanate of Johore. St Francis Xavier, the Apostle of the East, visited Melaka 15 times between 1545 and 1552, and was welcomed although he didn’t convert the people of Melaka. In the early 17th century there were regular attacks by the Dutch, the rising trading power at the time, and they captured Melaka in 1641 with the help of Johore. During the Napoleonic Wars the Dutch handed Melaka over to the British to keep it from being seized by the French, and then in 1824 ceded it to the British in exchange for Bencoolen (Bengkulu) on Sumatra. Melaka remained under British control until 1957 (apart from the Japanese occupation during World War II), first as an outpost of the British East India Company, then as a Crown Colony, and then from 1946 as part of the Malayan Union and then the Federation of Malaya.

The Portuguese fort built in 1512 was destroyed in 1641 and rebuilt in 1670, and largely demolished by the British in 1806 (it would have been totally demolished if Sir Stamford Raffles, here on sick leave, had not intervened); the Stadthuys or Dutch City Hall was built in the 17th century on the site of the Portuguese governor’s house. These now form the heart of the World Heritage Site, where various new museums have been created in a bid to boost cultural tourism, along the lines of Singapore (see this post) but in a rather more amateur way. However the street linking them, Jalan Kota is traffic-free, and smoking-free too, and makes an attractive promenade.

Starting at the Stadthuys, at the northern or city-centre end of Jalan Kota, you’ll pay 10 Ringgits for access to five museums and an art gallery, but the main attraction is the History Museum in the Stadthuys itself, with wonderful Malay knife blades as well as cannon and porcelain. At the other end of the pedestrianised street, the Independence Memorial is a free museum in the former Malacca Club, where the first leader of independent Malaya, Tunkuh Abdul Rahman, announced the date of independence for the first time on 20 February 1956 (he’d gone to London on 1 January to negotiate with the British government and returned via Singapore, so this was his first stop back on Malayan soil). It gives a decent enough run-down of Malaysian history, and not just the movement for independence. (One of the new museums along Jalan Kota is the UMNO Melaka Museum, dealing with the history of the United Malays National Organisation, Rahman’s party, which gives a more narrowly focussed view – the same applies to the Democratic Government Museum, well funded in its large modern building, but aimed at educating Malaysians, not foreigners.)

It’s perhaps worth mentioning that the Independence Memorial stands opposite A Famosa, the gateway that is all that’s left of the Portuguese fort; more recently the foundations of the Santiago Bastion were revealed here, and in 2006 parts of the Dutch Middleburg and Victoria Bastions, by the river, have been tarted up and made accessible to tourists.

But really, despite these efforts to move tourism in a more upmarket and cultural direction, Melaka’s visitors are mostly Malaysians and Chinese – the town’s trademark seems to be the luridly decorated and illuminated trishaws (with a sound system to match) that seemingly cater to Chinese honeymooners and the like. 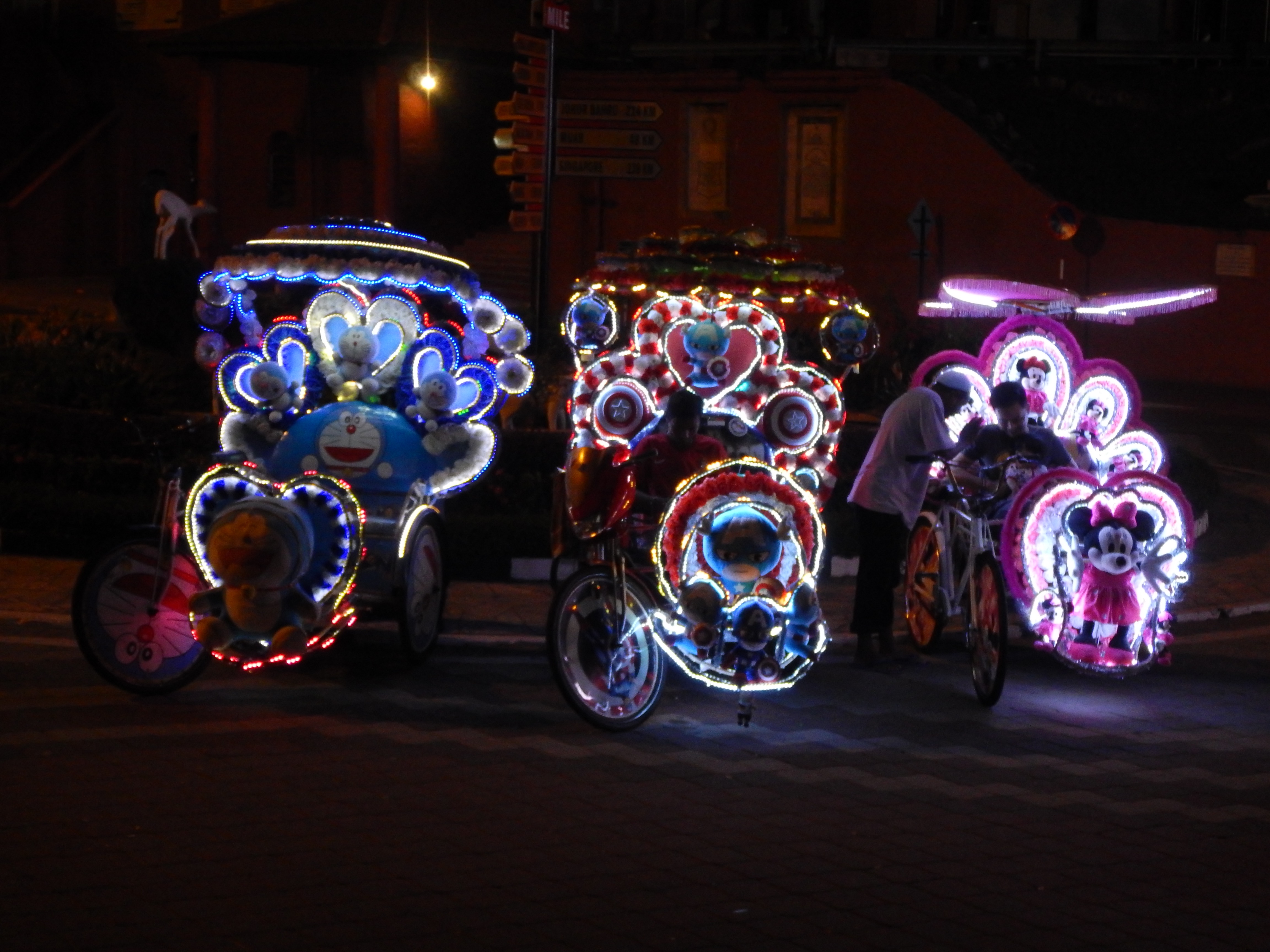 In contrast, Georgetown (Penang) has lots of hostels and sees far more western visitors, including Aussies in singlets and backpackers on the beaches-and-bars trail around South-East Asia (there’s a fast ferry link to the lovely island of Langkawi to the north). It also has a growing expatriate population, and property on the island now costs about double what it costs on the mainland. Its history is much more recent – in the 16th and 17th centuries its sheltered anchorage, with plentiful fresh water, made it a perfect stopover for Chinese, Indian, Arab and European trading ships during the monsoon months, and thus also a happy hunting ground for pirates, such as Sir James Lancaster who lay in wait here during the summer of 1592. In 1786 the Sultan of Kedah (under threat from Siam and Burma) let Francis Light of the British East India Company occupy what he called Prince of Wales Island. He founded Georgetown which was a free port from 1786 until 1969 (although it was never usable as a naval dockyard). When British military aid was not forthcoming the Sultan attempted to retake the island in 1790, and the next year a treaty was signed obliging the EIC to pay rent to the sultan. From 1826 the EIC created the Straits Settlements (Penang, Melaka and Singapore), ruled from Penang, but in 1832 this was transferred to Singapore; in 1867 they came under British rule as a Crown Colony. As with Singapore, the port prospered and immigrants flooded in, particularly Chinese as well as Arabs, Singhalese, Tamils, Thais and Burmese. There were also (from 1802) Armenians, notably the four Sarkies brothers who in 1885 founded the Eastern and Oriental Hotel, still the grandest hotel in South-East Asia.

The Chinese incomers were enrolled into two main secret societies, one Cantonese-speaking and one Hokkien, and in 1867 these fell out, leading to nine days of rioting until police arrived from Singapore; the name of Cannon St dates from this time. From the 1880s the area east of Beach St (now Lebuh Pantal) was reclaimed from the sea. Penang was occupied by the Japanese in 1941 without a shot being fired, and a couple of German U-Boats were based here from 1943 to attack British shipping in the Indian Ocean. After World War II Penang was, like Melaka, part of the Malayan Union and then the Federation of Malaya – Melaka and Penang continue to be ruled by governors rather than sultans, and Penang is now run by the opposition Democratic Action Party, which seems to be doing a good job (it’s definitely much less corrupt than the national government).

The core of the World Heritage Site, essentially Chinatown and Little India, is attractive and lively, with pricey little coffeeshops, noisy bars and gift shops, and the best Chinese and Indian temples, notably Khoo Kengsi (hidden away down Cannon Square, an alley off Cannon St) and Sri Mahamariamman (founded in 1801 and rebuilt in 1833), and the Kapitan Kling and Achin Street mosques, founded in 1802 and 1808 respectively. But don’t miss the buffer zone, just to the north, where you’ll find the colonial buildings, starting with Fort Cornwallis, built of wood by Light and rebuilt in stone (by Indian convicts) in 1804 – it’s a bit of a let-down unless you take a free guided tour, which is recommended. Nearby, the Clock Tower was commissioned for Queen Victoria’s Diamond Jubilee but finished only after her death in 1902. Just beyond are the Anglican church of St George the Martyr (founded in 1818) and the Roman Catholic church of the Assumption (1860) – with between them the History Museum. Built as a school in 1896, this is cheap and well worth a visit, with its display of Baba-Nyonga (Straits Chinese) embroidered wedding costumes a particular highlight. Across the road is the imposing High Court, built in 1903 and extended in 2007, and just north at 14 Leith St the Cheong Fatt Tze Blue Mansion, built by the eponymous Chinese merchant in the 1880s and refurbished from 1989 – it’s run as a boutique hotel to pay for ongoing maintenance, but can be visited on tours (11am, 2pm, 3.30pm; MR17). It gives a wonderful insight into the lifestyle of the amazingly wealthy Chinese merchants of the time.

If I had more than one day in Penang, I’d get out to the Botanic Gardens, created in 1884 around the waterfalls from which fresh water was piped to the harbour in 1805, and I’d hike up Penang Hill (833m) – a track was cleared to the top in 1790, up which colonial-era visitors could be carried by pony or sedan chair; in 1924 a funicular railway was built (upgraded in 2010) and this became the only hill station along the lines of Shimla or Darjeeling in Britain’s Far Eastern colonies. The starting point is the village of Air Itam, reached by regular Rapid Penang buses from Georgetown.

Melaka sprawls inland from the old town, and the only way to reach the Sentral bus terminal is by taxi (MR20) – then it costs just MR12 to get to Kuala Lumpur in a comfortable a/c bus. The railway passes a long way inland of Melaka, and it’s a long crawl even for buses to reach the expressway to KL or Singapore. I stayed at the Discovery Café and Guest House, a cheap and adequate travellers’ place – the café has some character, but the rooms (across the road) definitely do not, although they do have air-conditioning as well as shared toilets and showers. The Geographer Cafe, at 83 Jalan Hang Jebat, is justly a landmark on Chinatown’s Jonker Street strip, with decent food and beer plus live jazz.

The first bridge to Penang Island opened in 1985, just after my first visit, and a second opened in 2014 – but the classic way to reach the island is still the best, by ferry from Butterworth. The 20-minute ferry ride costs just MR1.20 to the island (the kiosk just changes notes to coins for you to feed into the turnstile) and is free returning to the mainland; the walkway from the train station at Butterworth is tortuous and tedious, but there is a free shuttle bus ferry to and from the bus terminal. I stayed on Jalan Muntri, in the World Heritage district but a bit quieter and classier than the streets nearer the centre.