I visit Italy several times a year, but I’m normally stopping for one night in Courmayeur while leading hikers on the Tour du Mont Blanc. In the spring of 2016, however, I did manage to spend a couple of weeks in Tuscany and Umbria – we ate and drank (it’s easily the world’s best cuisine for vegetarians, in my opinion) and stayed in nice places, but this post is mainly about art and museums – of course Florence is the world’s capital for these, with the Uffizi housing the world’s greatest collection of Italian Renaissance art. But there’s plenty of information on that in guidebooks and online.

In 2015 the Uffizi, the Pitti Palace and the Boboli Gardens were merged into one super-museum (with 3.4 million visitors and ticket revenue of €17.3 million per year); in 2016 the German Eike Schmidt was appointed as the first non-Italian director of the Uffizi, with a commitment to shake things up. Traditionally Italy’s leading museums were tightly controlled by the Ministry of Culture, but since the 1990s it has allowed private companies to provide various services, including putting on some temporary exhibitions, but while this did do something to open up the system’s sclerotic arteries it also introduced more conflicts of responsibility. Now the aim is to give powerful museum directors the chance to get a grip, but bureaucratic inertia and resistance are powerful. The single biggest challenge is being unable to freely recruit or dismiss staff – even persuading guards to rotate from room to room, rather than having a job for life in one favourite corner, involves tense negotiation with unions.

The Uffizi’s ticketing system is an unwieldy beast (I don’t have to tell you to book online in advance, I hope, rather than queueing for hours), but again private resellers and tour companies are keen to protect their profits from marking up the basic €8 cost.

Matteo Renzi was once mayor of Florence before becoming Prime Minster and trying to shake up the Italian state as a whole – alas, he resigned after losing a constitutional referendum in December 2016. Italian resident Tim Parks has written Italian Ways, a surprisingly fascinating account of the way the Italian railways are run, which serves as a template for Italian society as a whole.

One obvious fruit of the merger would be to open up the the intriguing Vasari Corridor (built by Vasari in 1565), which leads at an upper level from the Uffizi, across the Ponte Vecchio, to the Pitti Palace. It houses a collection of over 700 self-portraits (by Titian, Carracci, Delacroix, Ingres, Sargent, Morandi, and more contemporary artists, as well as by female painters such as Angelica Kauffmann, Elisabeth Louise Vigée Le Brun and the even less well-known Violante Beatrice Siries and Rosalba Carriera); only a few private tour companies currently have access to it, and they are lobbying hard to keep their profitable venture for themselves. In any case it’s not the best place for paintings, due to the lack of temperature and humidity control, and Schmidt wants to move them to the main Uffizi building (where offices will be converted to galleries) and replace them with classical Greek and Roman inscriptions.

While the Uffizi is swamped with visitors, the adjacent Bargello, renowned for its Renaissance sculpture and a great collection of Islamic art, is struggling to make people notice it; it recently merged with four smaller museums, which may either give it more visibility or dilute it. It too has a new director who has inherited a €2 million deficit and a museum without a proper catalogue database.

[January 2020 update – remarkably, I was speaking the other day to a half-Florentine friend, who said that she and her mother had been shown around the Botticelli room at the Uffizi before it reopened (after the paintings had undergone a revelatory cleaning) in the late 1970s – the director was a family friend, and he at least pretended to ask them for advice on how to arrange the rehang. An amazing experience for a teenager! Although known as ‘rooms 10-14’, this was actually a single room from then until 2016 when they were reorganised as rooms 9 to 15.]

In more straightforwardly good news, two more of Florence’s museums, closed for many years, have reopened – the Museum of the Opera del Duomo, home to the cathedral’s greatest artworks, completed its refurbishment at the end of 2015. Housing the world’s largest collection of Florentine medieval and Renaissance sculpture, including a Michelangelo pietà, other works by Donatello, Andrea Pisano, Lorenzo Ghiberti and Luca della Robbia and almost seventy fragments from the cathedral’s lost medieval façade, it’s set to be one of the city’s unmissable sights (move over, Bargello). One €15 ticket covers the museum and all the other monuments around the duomo, such as the baptistry and campanile.

The Istituto degli Innocenti (Institute of the Innocents; daily 10am-7pm; €7), on Piazza Santissima Annunziata, was founded in 1445 as the first secular orphanage in Europe, and still works to protect children and families, with UNICEF’s research office based here. Brunelleschi’s building, one of the most important civil buildings of the Renaissance, with its two lovely cloisters, was closed from 2010 to 2016 for refurbishment. Luca della Robbia’s tondi of ceramic babies on the façade advertise the building’s purpose, and the building also houses an exceptional art collection on the first floor, including more works by Luca della Robbia plus Botticelli, Ghirlandaio, Piero di Cosimo and many others.

The arcaded piazza itself is one of Florence’s more authentic and attractive. In the centre, the equestrian statue of Grand Duke Ferdinand I was Giambologna’s last work, cast from Turkish cannons captured at the battle of Lepanto. On the north side of the square, the church of the Annunciation was rebuilt by Michelozzo in the second half of the fifteenth century, but now has a heavily Baroque interior.

Also in June 2016, the historic Teatro Niccolini, the city’s oldest theatre, reopened after being closed for no less than twenty years. In other news from Florence, conservationists have finally figured out how to restore Vasari’s huge Last Supper from the Santa Croce church, badly damaged in the terrible flood of 1966; and McDonald’s is suing the city for €18m after the mayor blocked its plans for a ‘restaurant’ on the Piazza del Duomo (but one did open in December 2016 on Borgo Pio, just outside the Vatican in Rome, causing some minor scandal).

Something to keep anyone young at heart amused, whilst seeing the sights in Florence, is spotting the plethora of defaced road signs by the French street artist Clet Abrahams.  He uses removable stickers and is tolerated, aided and abetted to various degrees by the authorities and his fans. 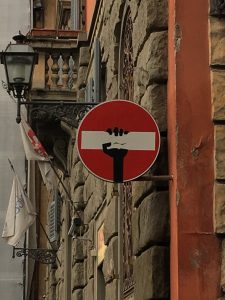 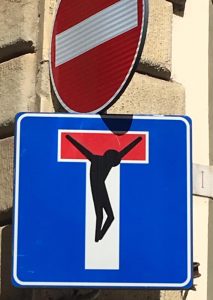 Florence’s orange buses are changing to a red and white livery; the blue buses are for regional services out of the city. Florence is a hub of Italy’s flashy high-speed train service, but it’s worth knowing about the far cheaper regional Roma-Firenze train which runs every two hours and calls at fascinating places like Arezzo and Orvieto; this is also the easiest way to transport bikes.

We enjoyed discovering Cedrata Tassoni, a local soda drink, launched in 1956 (although the company had been selling a syrup since 1793), that’s made from the oil of the citron, similar to a lemon (originally they used Citrus Medici from the shores of Lake Garda, now it’s Citron Diamante from Calabria). It comes in a cute little bottle with a surface like citron peel and no label (all information is on the lid). Perfectly small enough to take home in your hand luggage!!

You’ll hear that the favourite Florentine sandwich (sold from stalls on city squares) is made of lampredotto, often translated as lamprey – however this is nothing to do with the parasitic fish, but is actually the fourth and final stomach of a cow. Tripe more generally is also popular here, in the form of trippa alla fiorentina – and bistecca alla fiorentina (ie steak) is even more popular. The Florentines really aren’t particularly veggie-minded.

Speaking of sandwiches, tramezzini are not triple-deckers, as some people seem to expect, just normal sandwiches, though with the crusts cut off. We ate some fantastic arancini (stuffed rice balls, coated with bread crumbs and then deep fried, usually filled with ragù, mozzarella and peas, originally from Sicily) – and then came home to find that suddenly they were everwhere in Britain, including a wedding and at Jamie Oliver’s Fifteen. Definitely the flavour of the month. The best place to buy them is Ará (via degli Alfani 127, on the corner of via Ricasoli) – it has great cannoli and gelato too.

However we did also find two excellent vegetarian restaurants, notably Brac (via dei Vagellai 18), a bookshop which suggests sharing plates of pasta, salad and a sort of wrap – service is a bit random (be sure to book) but the food is fantastic. There’s also Simbiosi (via de’ Ginori 56), where I was particularly amused by the pea hummus pizza (topped with mushy peas, basically), the range of craft beers and organic wines, and indeed the hip English-speaking staff. I was curious about how the concept of ‘Zero Kilometre food’ could work in a city centre, but apparently it actually refers to a radius of 70km. Weak marketing, I feel, but the concept is great, derived from the Slow Food movement founded in northern Italy 30 years ago.

A gourmet haven down on the border of Umbria

We stumbled across Borgo Cenaioli, an Agriturismo enterprise 15 km from Perugia, in a 16th-century hamlet of just 12 inhabitants near Lake Trasimeno. We were the only diners so had the delightful courtyard to ourselves and were offered a set menu, which was adapted for the vegetarian amongst us. It’s also possible to stay there but we didn’t see the accommodation.  A perfect spot to get off the road, relax and eat well.

One thought on “Florence – museums and much more”