Berlin is positioning itself as the capital of post-Brexit Europe, in case you hadn’t noticed, the most culturally dynamic city at the heart of the continent’s most powerful economy. Huge amounts of money are being spent over long timescales to take the already wonderful cultural assets of two cities, East and West Berlin, and make them into a global powerhouse. The key to this is the Museumsinsel (Museum Island, just inside the former East Berlin), where a huge extension to the legendary Pergamon Gallery is being built in five phases between 2012 and 2025, including a fourth wing to the west as in Alfred Messel’s original plan. In 2017-9 visitor services are being transferred to the new James Simon Gallery, named after the Jewish businessman who gave huge and very important donations to the museum in 1904 and 1918. Designed by the British architect David Chipperfield, this will be a combined visitor centre for all the Museumsinsel museums. The new entrance will be on the south side, 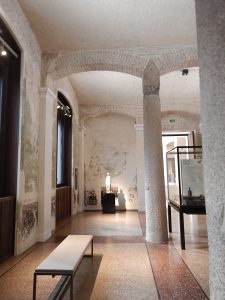 not far from the new U-Bahn station (on line U5, opening in mid-2019) at the west end of the Schlossbrücke (and next to the German History Museum). It will also give access to the Neues Museum, the second world-class archeology museum on the island – this was beautifully refurbished in 2003-9 by David Chipperfield, who has incorporated the damage caused in World War II rather than trying to remove or hide it.

There’s nowhere else like the Pergamon, with its full-size reconstructions of the Ishtar Gate of Nebuchadnezzar II and Processional Way of Babylon and the Market Gate of Miletus in the south wing, and the altar hall of Pergamon in the north wing, although this is closed for refurbishment from 2014 until 2019. It really will knock you sideways. Meanwhile the Neues Museum has beautifully presented displays of Heinrich 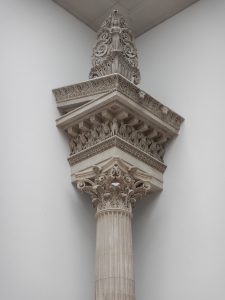 Schliemann’s finds from the site of Troy (which he secretly removed from Turkey, having to pay a fine afterwards – it doesn’t seem so unfair that much of the collection was then seized by the Soviet Union in 1945, although it is about time that it was returned), as well as the iconic long-necked bust of Nefertiti and the Golden Hat of a Bronze Age Celtic priest, with a 19-year sun/moon cycle encoded on it.

Also here are the Altes Museum, the first museum built on the island (by Karl Friedrich Schinkel in 1823-30), housing classical antiquities; the Alte Nationalgalerie (Old National Gallery, displaying a wonderful collection of 19th-century German and French art) and the Bode Museum, home to Byzantine art and sculpture, including what is in my opinion a wonderful collection of Italian Renaissance altars by virtually unknown artists. Anywhere else these museums would be huge cultural draws, but here they tend to be overshadowed.

All this money being poured into the former East Berlin has left the former cultural hotspots of West Berlin looking rather sorry for themselves – the Kulturforum, around the Philharmonie concert hall (and near the horribly over-rated Potsdamer Platz), seems very uncared for, with lots of long grass and no signage. The Neues Nationalgalerie, one of Mies van der Rohe’s finest buildings, is closed for refurbishment (by the ubiquitous David Chipperfield) and won’t re-open before 2019; by 2027 it will be linked by a tunnel to the Museum of the 20th Century, a new museum of 20th-century art by Herzog & de Meuron. Yet the Gemälde Galerie probably has the most complete and wide-ranging collection of all Berlin’s art galleries, covering all of European painting from the 13th to the 18th centuries. All the Italian, Flemish and German masters of the Renaissance are here, followed by a superb group of 16 Rembrandts and a couple of Vermeers, as well as other 17th-century Dutch works; it’s pleasing to see a group of fine 18th-century British works, by Gainsborough, Reynolds, Raeburn, Lawrence and Hoppner, too. Allow plenty of time – a full tour will cover 2km, taking in 72 main galleries and lots of side rooms, with around 1,000 works on display, as well as 400 more in the lower-level study gallery (open Friday to Sunday only). It’s definitely one of Europe’s great galleries.
While you’re at the Gemälde Galerie, see what’s on at the Kupferstichkabinett (the Cabinet of Engravings), in the same building – for conservation reasons they only put on temporary shows, but they have an excellent collection to draw on.
For 20th- and 21st-century art, the place to go is the Berlinische Galerie, which has interesting temporary exhibits downstairs and its permanent collection upstairs (running up to 1980, not 1989 as one might have expected) – it’s a good representative overview, with one painting by just about everyone who should be represented, but it doesn’t really get excited and go into depth about anything in particular, especially not Expressionism, Germany’s main contribution to modern art.
I didn’t go back to Dahlem, in the southwestern suburbs, site of West Berlin’s other main grouping of museums, but I assume it has a similar uncared-for feel, as it’s intended to move the Museum of European Culture to the Kulturforum, and the Museums of Ethnography and Asian art to the Berliner Schloss, now being built immediately south of the Museumsinsel. This is a very controversial project to recreate the largely 18th-century palace of the Electors of Prussia, which was heavily damaged in World War II and demolished in 1950 by communist East Germany. They created the huge Marx-Engels Platz and the Palace of the Republic (1976), which was itself demolished in 2008, supposedly due to the presence of asbestos. There’s a strong feeling that this historic building, where German reunification was agreed and where East Germany’s first free parliament met, should have been preserved rather than being demolished for petty political point-scoring. Certainly the plan to rebuild the Schloss is backwards-looking and reeks of imperial bombast; nevertheless the concrete shell has been completed and a new north-south pedestrian axis created, from the Lustgarten to Breite Strasse, and it only remains to deck it out with Baroque features and to move the museums in, by 2019. One good sign is that the project is led by Neil MacGregor, the very successful director of the British Museum until 2015. It’s run by the private Humboldt Forum, which commemorates Alexander von Humboldt (1769-1859), the explorer and biologist, rather than his brother Wilhelm (1776-1835), politician, linguist and founder of the university now named after him, who is probably better known in Berlin; the temporary Humboldt Cube, on the north side, houses a general exhibition on the project and tasters of what’s to come (for instance ‘Frog Trading in Africa – the ecological effects’ – looking at the spread of malaria).
The historic centre of Berlin, from the 13th century, was the Nikolaiviertel, to the east of the Schloss near the Rathaus, and it was only after 1688 as the city expanded to the west that the area of the Schloss became central; in the 1730s Friedrichstrasse and Wilhelmstrasse were extended to Mehringplatz and Leipziger Platz, and in 1788 the Brandenburg Gate was erected. The Nikolaiviertel has been pedestrianised and prettified, with fairly generic new bars and terraces, as well as August Kiss’s statue of St George and the Dragon, and four museums, mostly remembering bourgeois life in the area.

Katy says the next bit is very boring (except the news of the new cycle scheme) unless you are a transport buff….so you have been warned!!

Berlin’s public transport system is of course also being unified and integrated – the huge Hauptbahnhof (Central Station), opened in 2006 where the city’s North-South and East-West lines cross, is just the latest stage in its evolution. The Lehrter Bahnhof, opened in 1871, was the terminus of the railway from Hannover, and from 1884 from Hamburg – this route was extended eastwards through the city and is now a four-track elevated line with one pair of tracks for long-distance trains and one pair for the Stadtbahn, carrying local S-Bahn services. The North-South line was created when various terminals north and south of the centre were closed (some architectural traces can still be identified) and mainly carries S-Bahn services. Meanwhile the city’s Ring line was completed by the DDR (to allow its trains to avoid West Berlin) and carries another useful range of S-Bahn services.

Construction of the U-Bahn (underground railway) began before World War I, but it took its present shape when the city was divided and West Berlin had to create new routes to avoid East Berlin; new routes into the East are now under construction (see above), but very slowly due to spending constraints.
Trams, traditionally a feature of East Berlin, are slowly being extended into the West, with routes M5, M8 and M10 being extended to the Hauptbahnhof in 2014 and 2015. But cycling really is the best way to get around Berlin, with 620km of cycle tracks and 13% of journeys made by bike. In spring 2017 Germany’s largest bike-sharing scheme is due to go live here, with thousands of bikes at 700 rental stations, roughly 150m apart.

[Update – Well, the U5 underground line extension to Museuminsel and Alexanderplatz finally opened in December 2020, not mid-2019 as I said above – it was originally due to open in 2017. The short stub known as U55 has finally been absorbed into U5, which now runs from Hauptbahnhof to Hönow. Don’t even mention the delays to the new Berlin airport, which finally opened a month or two earlier…. ]