This is just to let you know that the sixth edition of my Bradt Travel Guide to Georgia is published today – I’m very happy with it, I was able to add all the new material I wanted and generally bring the book up to date (the previous edition felt just a little twentieth century – in a Georgian context – when I used it in the field). The editorial process went remarkably smoothly – I assumed that the fact that tourism was increasing by no less than 20% a year meant that sales of the 5th edition were also up by 20% and that Bradt were happy to cover the cost of extra pages – in fact they used thinner paper which doesn’t look great, but it’s not too awful. 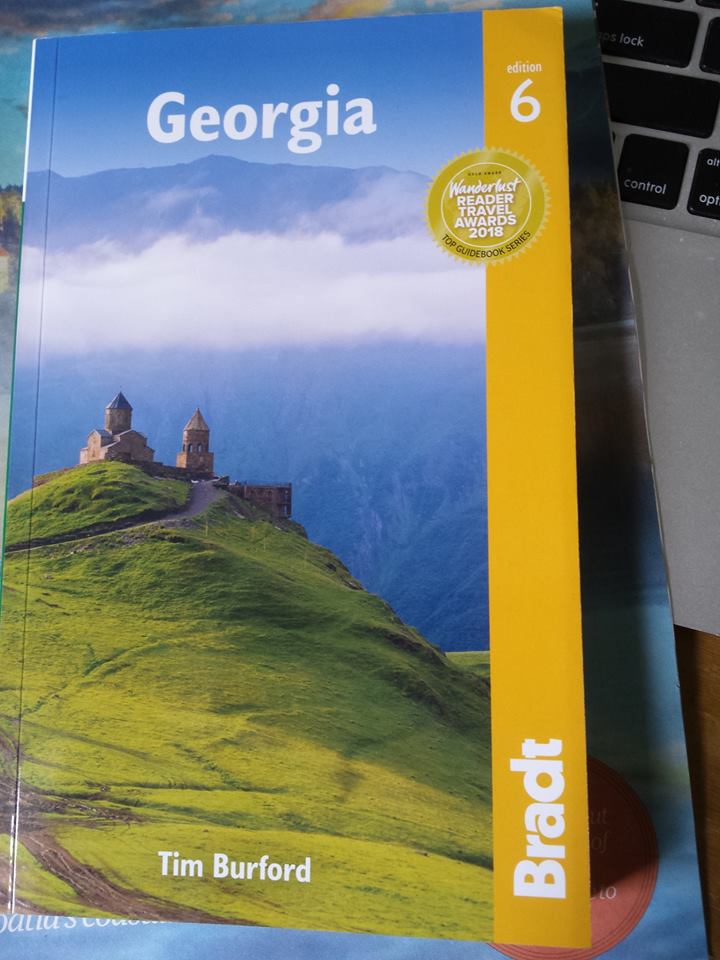 The most annoying thing, in fact, was using booking.com, with the meaningless slogan ‘We speak your language!’ and the constant repetition that the most basic guesthouses have a 24-hour front desk and luggage can be left there, not to mention ‘Couples particularly like the location — they rated it 9.7 for a two-person trip’ – all made-up nonsense.

As for recent news – in November 2017 a fire at the Leogrand Hotel and Casino in Batumi (not listed in the book) killed eleven people and shone a powerful light on the downside of the free-for-all policies behind the city’s tourism boom, hinted at on p.286 of the book. It’s obvious that safety standards were ignored by both businesses and local government, and I hope that has changed now!

There are serious proposals from the government to build roads into the mountains of the High Caucasus, past Juta and (via a tunnel) into Tusheti, which everyone who knows anything about sustainable tourism is totally opposed to – on the surface, of course, better access is good for residents trying to get to hospital or the shops, but it will destroy the tranquility of this beautiful area which is becoming more and more popular for long-distance hiking and horse-riding. It reminds me of the sad decline of the Annapurna Circuit, which was one of the world’s great hikes but has now been largely replaced by roads – there’s far more of a population in the Nepali mountains, so there’s more need for roads there, but the Georgian mountains are much emptier.

Finally, having written in the new edition about the liberalisation of social attitudes in Tbilisi, led in particular by nightclubs such as Bassiani (p.124), it’s sad to see that there’s recently been a backlash against these changes, with police raids and public marches. This is also in part a backlash against the increasing numbers of foreigners living in and visiting Tbilisi, which fits into wider narratives about over-tourism and populism. I hope this will calm down quickly, as tourism and western influences have generally brought positive change in Tbilisi.

PS at the moment I’m reading The Towers of Trebizond by Rose Macaulay (a bit dated in style, but still a classic), which is set in the part of Turkey right by the border with Georgia – which she refers to throughout as Russia. Grrrrr!

PPS As of today, 22 June 2018, Georgia has a new prime minister, after Giorgi Kvirikashvili was pushed to resign due to disagreements with Bidzina Ivanishvili – there had been protests in Tbilisi for a couple of weeks about a poor investigation into a schoolyard fight that left two sixteen-year-olds dead, along with the death of a Pankisi man in an anti-terror raid, both in December 2017. The new man is Mamuka Bakhtadze, who was in charge of Georgian Railways and then Minister of Finance; born in 1982, he’s apparently a friend of Ivanishvili’s son and had been groomed for high office. However the norm is for Ivanishvili’s picks to lose favour and be removed from politics within a couple of years.