Copenhagen has a remarkable range of museums, and I only managed to visit half a dozen of the main ones this time. That was before the second wave of Covid-19; they are now all closed until January 2021 at best.

The area known as the Centre or the Cultural Quarter is actually a bit dull, with much less street life than the less touristy shopping areas to the north – but there are some major museums here, as well as the central station and the Tivoli amusement gardens. The Ny Carlsberg Glyptotek, built by Carl Jacobsen (see my previous post), was extended in 1906, added the 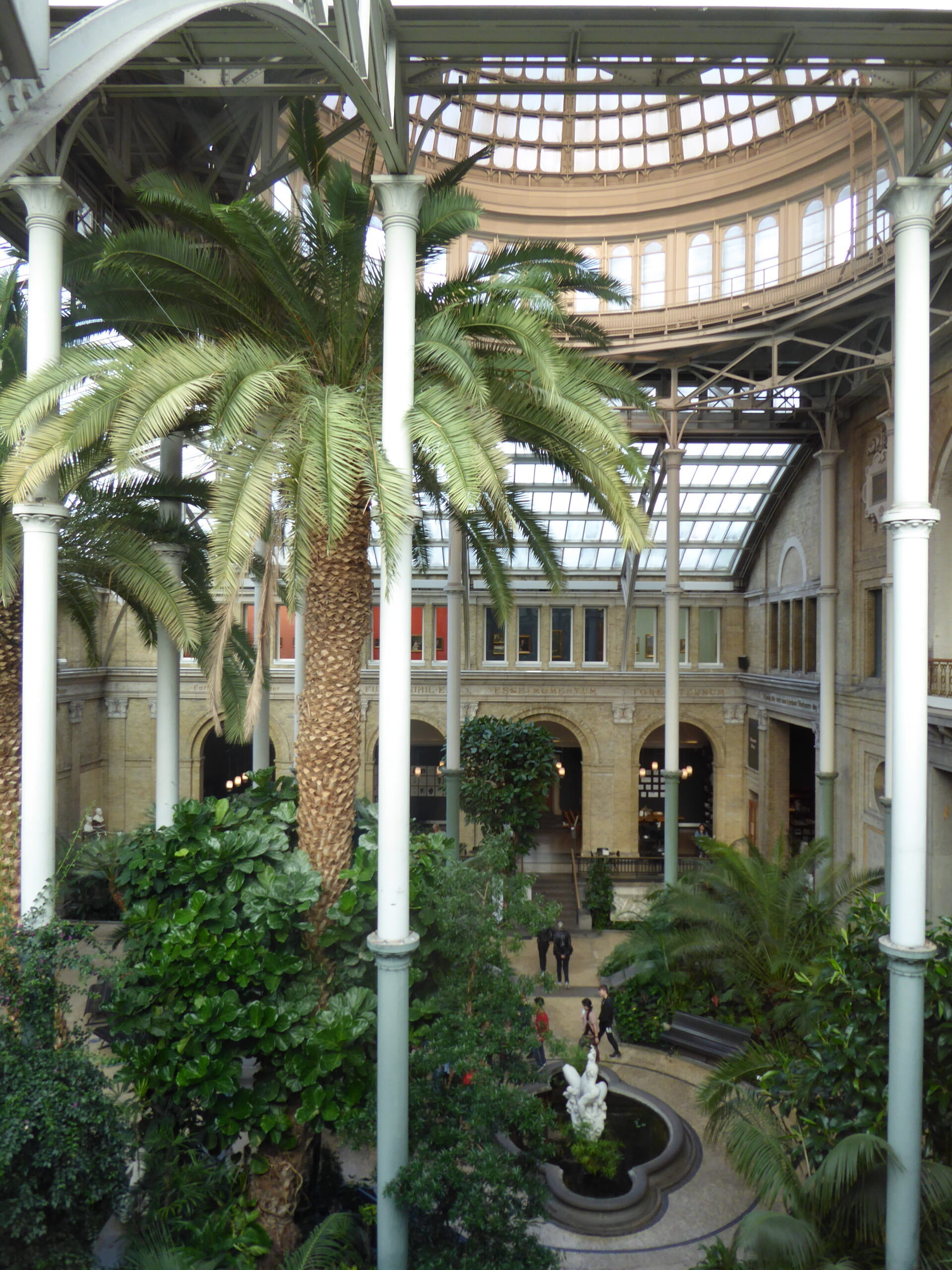 superb winter garden (where there’s a café in non-pandemic times), and in 1996 when a modern wing was added. There’s a huge array of sculpture, of course, both classical Greek and Roman, and largely nineteenth-century French and Danish works, including sculptures of the Three Graces by both Canova (c1830) and Bertel Thorvaldsen (1821), and frankly the Danish guy seems to me to have done better than the more 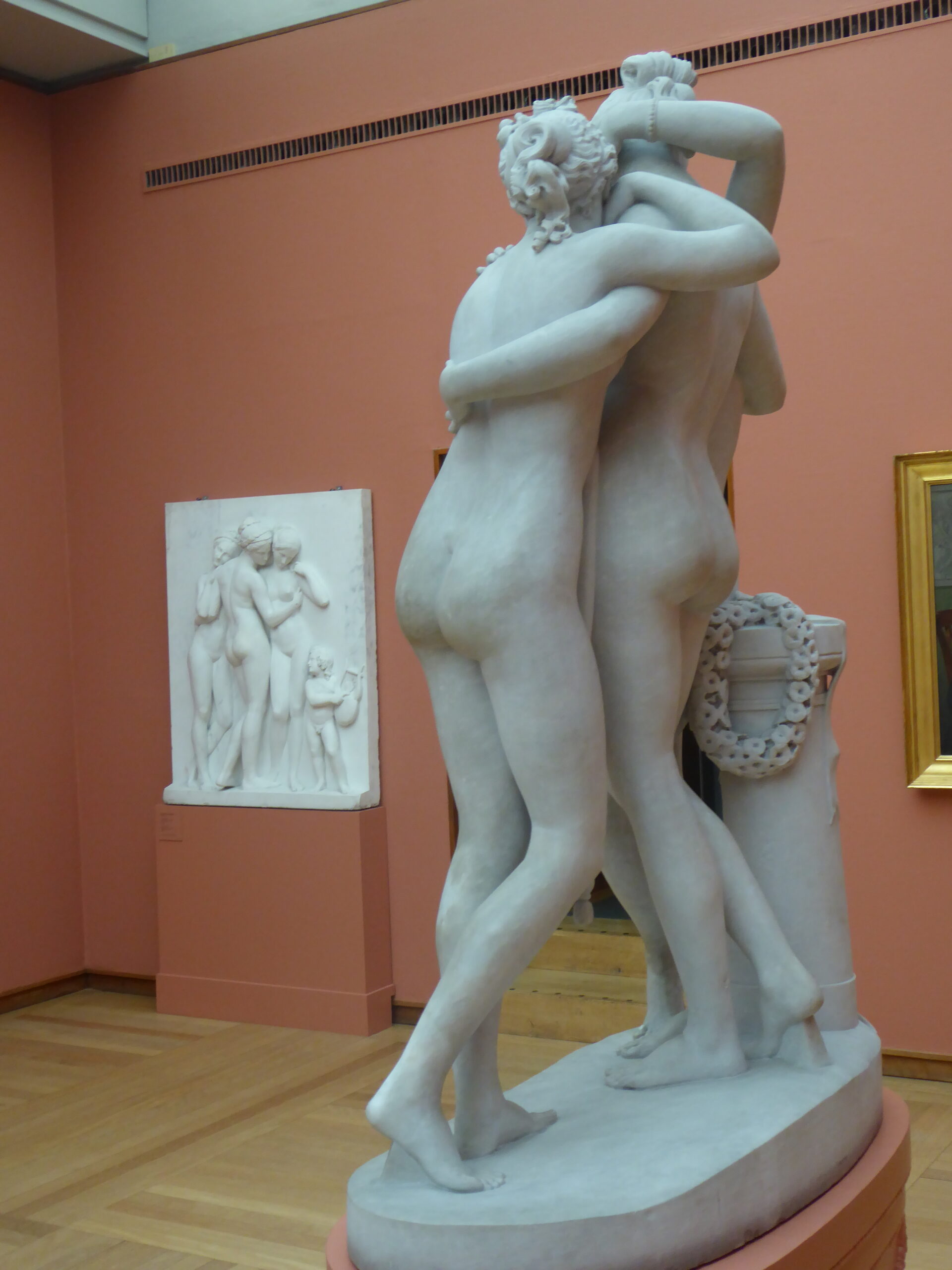 famous Italian. There’s lots of Rodin, as well as Maillol, Meunier, Bourdelle and Stephan Sinding (1846-1922). There’s also plenty of paintings from the Danish Golden Age (the nineteenth century – nothing to do with the more illustrious Dutch Golden Age), including works by Jens Juel, Christoffer Wilhelm Eckersberg (including a portrait of Thorvaldsen, Elisabeth Jerichau-Baumann and her son Harald Jerichau (also a sculptor), as well as the more famous Norwegian JC Dahl. Slightly more modern works by Theodor Philipsen and Karl Isakson lead to the superb collection of French impressionist and post-impressionist masterpieces, featuring almost all the great names from Corot and Courbet via Monet, Renoir and Degas through to Picasso (though only a bronze). There’s no Matisse, alas, and no mature Gauguin paintings, although there are lots of his stoneware heads and a wood carving.

A block to the northeast, the Museum of Copenhagen (Københavns Museum) reopened at the start of 2020 in a new location (built as the Public Trustee’s Office in 1894, and inspired by Italian Renaissance palazzi); the displays have been modernised, and reflect new research showing that the city is 150 years older than was thought, dating from the late Viking age – in a previous post I wrote about the former capital Roskilde and how it had been forgotten in Copenhagen.

It was a crowded little city, with ships unloading directly into warehouses, until the first planned extensions were built from the early sixteenth century, starting with Christianshavn, laid out by King Christian IV in a Dutch style. This was followed by Kongens Nytorv, still the city’s largest square, in 1663, and Frederiksstaden, centred on the royal palaces of Amalienborg, from 1747. In fact for me the most interesting displays cover the city’s transformation into a modern capital in the late nineteenth century – its population grew from around 130,000 in 1852 to almost 400,000 in 1902, as the city burst out beyond the old ramparts. The nearby City Hall and its square were laid out from 1892 to 1905, some of the world’s first cycleways were built in 1892, when electric lights first appeared, Parisian boulevards such as Vesterbrogade were laid out around 1900, and the last remains of the ramparts were destroyed in 1914-17 when the railway was extended north from the central station. The meatpacking district, between the central station and the Carlsberg brewery, was established in 1879, to remove the blood and guts from the old city – it’s now the heart of the city’s nighttime economy, with the hottest bars and clubs. 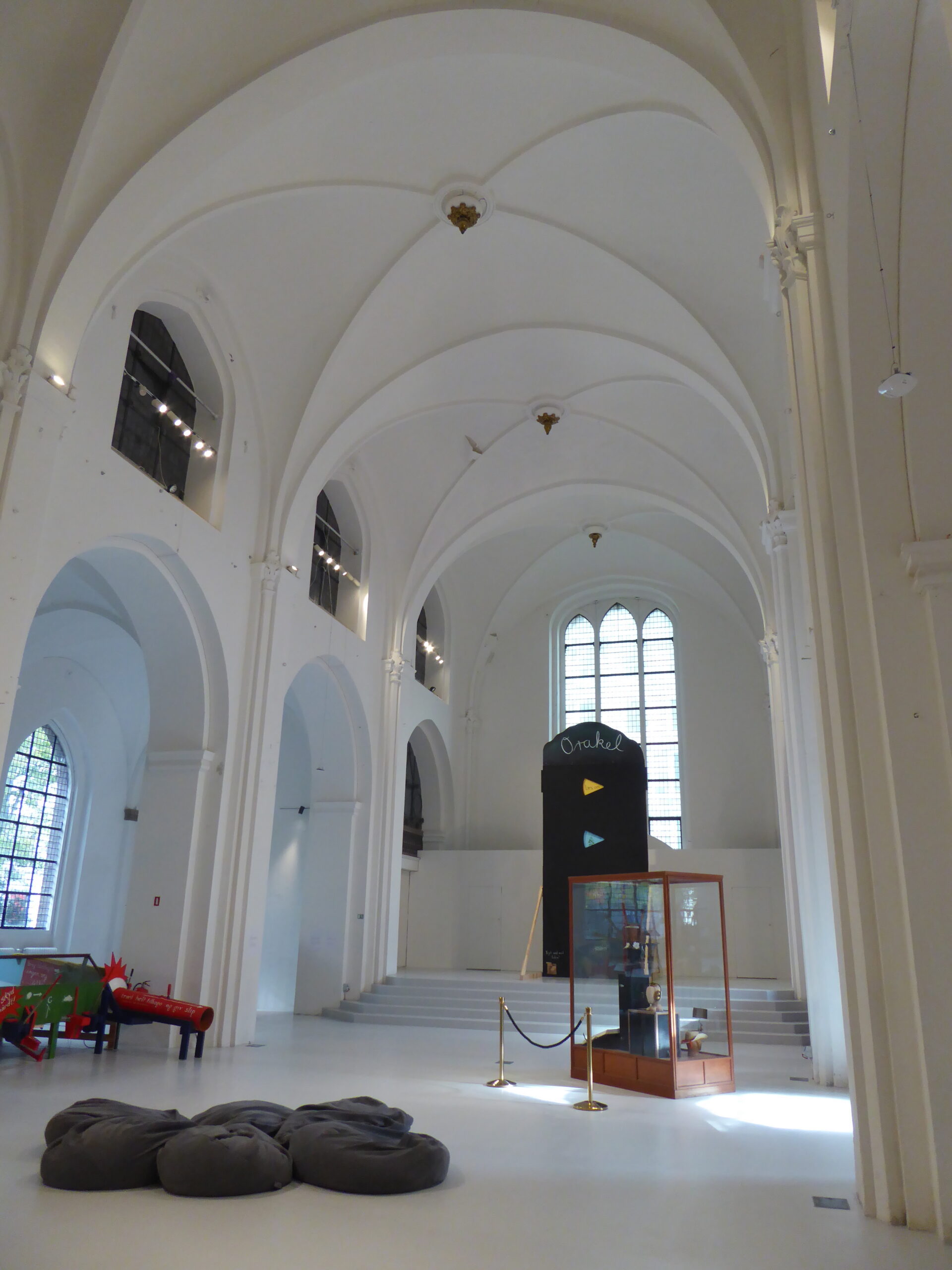 one (Port and Capital) based on a finds from a fifteenth-century ship found during construction of the opera house, and the other (Power of Words) on writers and the book market, including the philosopher Kierkegaard’s personal effects. The Museum of Copenhagen is associated with the Nikolaj Kunsthal and the Thorvaldsens Museum – tickets are valid for all three, and they’re all free on Wednesdays. The first, in the former church of St Nicholas, is a wonderful space for temporary art exhibitions; the second is of course dedicated to the sculptor, but there are also ‘interventions’ by other artists to break the monotony – actually, the sculptures are great, but the style is a bit unfashionable and it will not be a priority for many people. It’s worth noting that Thorvaldsen is sharing his 250th birthday year with Beethoven, although there’s much less fuss about it.

Diagonally opposite the Museum of Copenhagen (although the entrance is on the far side), the National Museum is a huge and very rewarding museum of history and culture. It starts with the Neanderthals, stating that they had no visual art – but one thing I know from my work in the caves of southern France is that this can no longer safely be said. In any case there are no traces of Neanderthal man in Denmark, although it’s assumed that they were here as nomadic hunters; certainly Cro-Magnon reindeer-hunters of the Hamburg Culture arrived by 14,500 years ago. From 9,000 years ago the rising sea levels that flooded Doggerland (in what is now the North Sea) were also dividing Denmark into its present layout of islands; fishing boats and dredgers often bring up implements of bone and antler, with amber jewellery found on beaches. Since then, as it happens, Northern Jutland has risen 12 metres and Southern Jutland has sunk 3 metres. Denmark is covered with ponds and bogs, and the 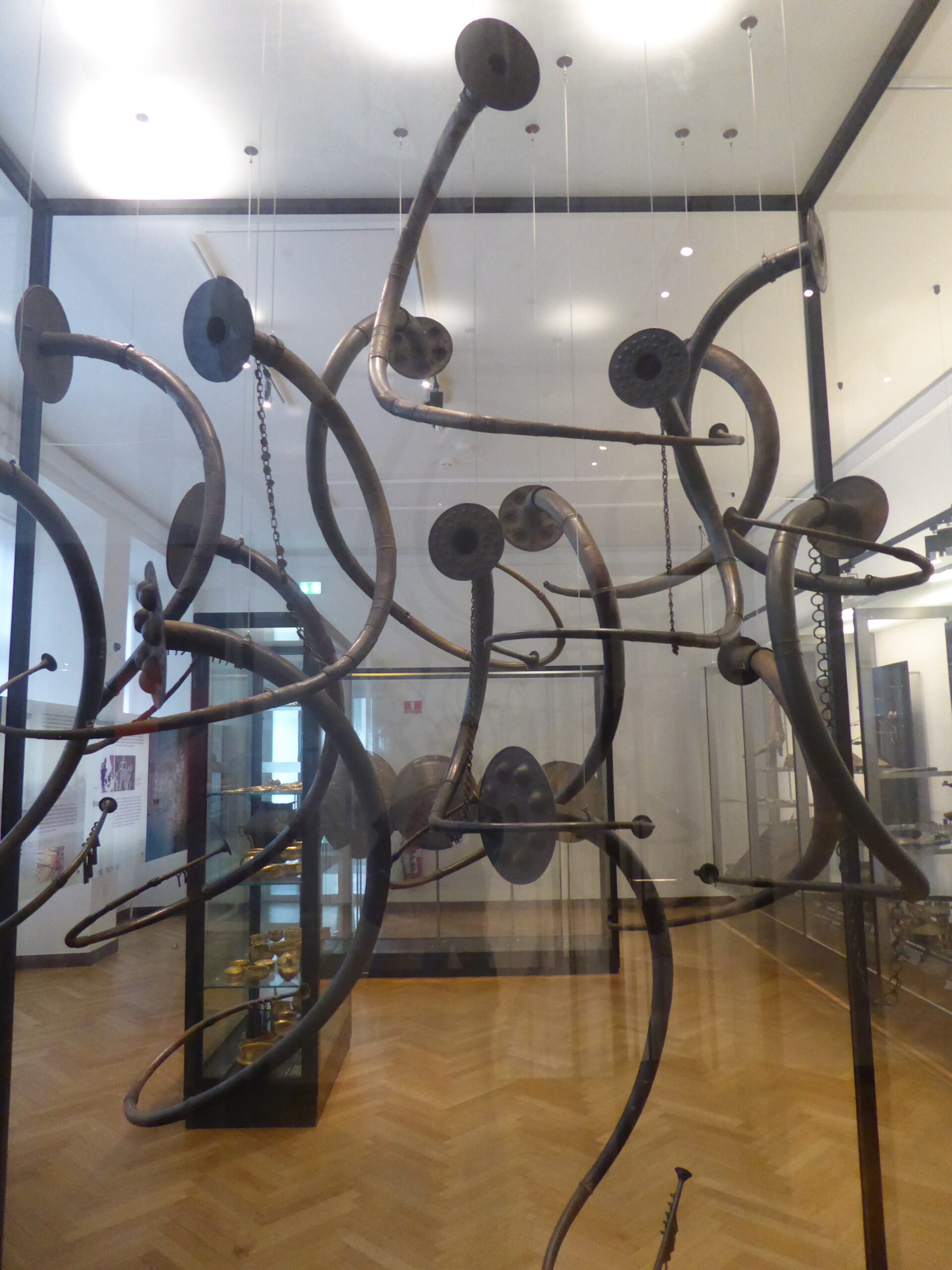 prehistoric peoples here spent a great deal of time and effort ‘sacrificing’ valuables, and indeed horses and human beings, in them, making Denmark a fantastic place to be an archeologist – the museum displays many of these finds, notably bronze ‘lur’ horns and axes, as well as whole ships. There are also graves, rock carvings and so on; the Romans didn’t get this far (apart from exploratory ships) but their coins did, and later the Vikings brought silk from Byzantium and silver from the mines of Central Asia. Runes, incidentally, developed from the second century AD; runestones appeared from the eighth century, but were actually more widespread in the early Christian period (from about 970 AD).

Going up to the first floor, the medieval displays start with lots of winged altarpieces, as well as weaponry and tapestries; it’s a bit more disjointed than the archeological displays (which are very detailed, but do occasionally lose the big picture). Things pick up again from the seventeenth century, with excellent coverage of Denmark’s colonies – Iceland, the Faroes and Greenland, first, but then also in the West Indies, what is now Ghana and a couple of towns in India – not to forget Skåne (or Scania), the southernmost end of Sweden, which was Danish until 1658. In fact, multiple wars with Sweden left Denmark in poverty, and then in the Napoleonic Wars Denmark was twice dragged into conflict with Britain (in 1801 Nelson put his telescope to his blind eye in the Battle of Copenhagen) and was forced to cede Norway to Sweden; and in the mid-nineteenth century the newly created Germany came along to seize Schleswig-Holstein (although northern Schleswig was returned to Denmark in 1920). The ‘organisation years’ began in 1864, when the country adapted to its reduced status by industrialising and establishing, for instance, unions (from 1870) and co-ops (from 1882); there was also mass migration from the countryside to the cities and abroad, with Copenhagen tripling in size from 1840 to 1900 and 10% of the population emigrating between 1860 and 1900.

Now, of course, Denmark is a highly educated and prosperous country with a diverse population (and yet the first three prime ministers of the 21st century shared the same family name – Anders Fogh Rasmussen, Poul Nyrup Rasmussen and Lars Løkke Rasmussen).

The museum also has ethnography and antiquities galleries, as well as many other museums and stately homes across Denmark, including the new Museum of the Danish Resistance (near the Little Mermaid), which opened in June 2020, closed due to the Covid-19 pandemic, and is due to open again in January 2021.

The National Gallery (Statens Museum for Kunst) is just north of the centre, across the road from the Botanic Gardens and the Natural History and Geology Museums. It has a large and world-class collection of art from the fourteenth century to the present day, starting with Ambrogio Lorenzetti and Mantegna, then Filippino Lippi, Bassano, Garofalo, Parmigianino, Titian, Barocci, Tintoretto, Magnasco, Salvator Rosa, Guardi, Tieoplo, ‘Grand Tour’ portraits by Batoni of Peter Beckford and of John Rolle Walter, a copy of Leonardo’s Virgin of the Rocks, and busts by Pisano and Bernini plus a small bronze by Giambologna. Naturally there’s the array of Dutch art to be expected across northern Europe, including a fine Adoration of the Magi by Hugo van der Goes, one Jan Brueghel the Elder, five Rubens, and four big Jordaens, as well as nine Cranachs (notably Venus with Cupid Stealing Honey). There are five ‘studio of Rembrandt’ paintings, an oil sketch, an etching of his mother and a study of an old man, but no actual Rembrandt painting. There’s also a Merry Company by Dirck Hals (see my post on Haarlem for Dirck and his better-known brother) and a painting of St Peter’s in Rome by Swanenburg from Leiden (see the same post).

I wasn’t particularly taken by the trompe l’oeil room, created for Kings Ferdinand III and Christian V in the late seventeenth century, and I’ve never liked eighteenth-century French art, so I wasn’t too sad that most of the 139 French paintings, by Bouchet, Lancret and others, ordered for the new Christiansborg Palace were lost when it burned down in 1794; but there are a few paintings by Poussin and Joseph Vernet (see my post on Avignon). However the collection of French Art 1900-30 is superb, thanks to the engineer Johannes Rump, who collected the works of the Fauves and in particular Matisse, donating them to the museum in 1928. There’s no fewer than eleven Matisse paintings as well as some sculptures, half a dozen Derains, two or three by each of Braque, Gris, Picasso, Dufy, Modigliani, Van Dongen, Vlaminck and Friesz, and others by Metzinger, de la Fresnaye, Soutine, Rouault, Vuillard, Valladon, Marquet, Laurens and Léger, plus sculptures by Maillol and Lipchitz and even plates by Derain and Vlaminck.

Finally, a striking modern extension (reached by bridges over what is now 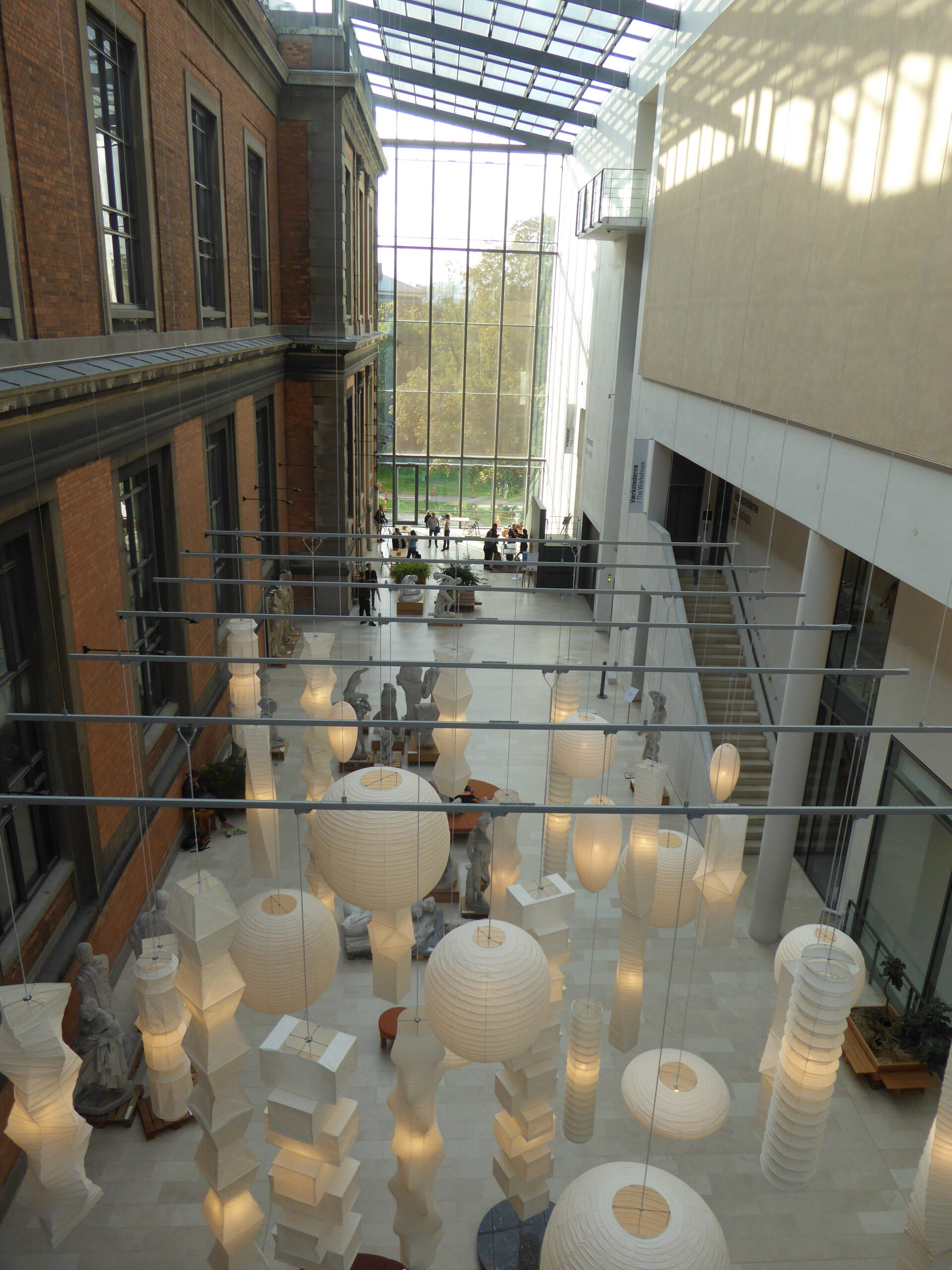 Scandinavian art galleries all make a big deal of having a classy café-restaurant, and this is no exception – it’s decorated by Danh Vo, a Vietnamese-Danish conceptual artist, whose family fled as Boat People and were rescued by a Danish container ship.

In the park at the rear of the National Gallery, the Hirschsprung Collection displays a good collection of nineteenth-century Danish art, both Golden Age artists and the later Skagen School, who were drawn to the northern tip of Jutland by its pure light, much as British artists were drawn to Lamorna and St Ives.

Near the south end of the Kongens Have (King’s Garden), back towards the city centre, the Davids Samling was created by the lawyer and businessman CL David (1878-1960) and is probably the best collection of Islamic art in Scandinavia (it was in the news recently for allegedly holding works stolen from the Ottoman empire, which it refuses to return). The building was closed for refurbishment from 2005 to 2009 (incorporating the house next door too) and the displays are dark but very professional; captions are only in Danish but there are information panels in English and Danish. You’ll finish in some rooms with original early-nineteenth-century décor and paintings from the Danish Golden Age and by Jens Ferdinand Willumsen and the brothers Joakim and Niels Skovgaard.

It’s worth mentioning that the Design Museum is closed until early 2022 (due to renovation, not Covid-19) – founded by Carl Jacobsen (see my previous post on Copenhagen) as the Danish Museum of Art and Design, it includes the exhibit on the Danish Chair that I moaned about in my post on Amsterdam.