I’ve passed through Exeter many times, often changing trains there when I was at school in Dorset (yes, half a century ago), and it’s always been a pleasant cathedral city that’s less obviously industrial and military than Devon’s other city, Plymouth. I stopped off recently, mainly to visit the city’s museum, the Royal Albert Memorial Museum (known as RAMM), which was founded in 1865 to commemorate Prince Albert, who died in 1861 – it was closed from 2007 to 2011 for a major refurb and extension, and was rewarded by winning the Museum of the Year title in 2012. I can’t believe it was that long ago, but finally I’ve gone to take a look. It’s still busy and obviously very popular. There are good history displays covering the Roman settlement of Isca at a ford across the Exe, where a bridge was built from 1190 (the medieval bridge survives, although oddly now on dry land). The Romans also built a port, but rival merchants in Topsham built weirs in the thirteenth and fourteenth centuries to cut Exeter off from the sea; in 1564-66 the first part of the Exeter Canal was built to restore that access, and the city became prosperous, finally expanding beyond the Roman walls. Its peak was in the mid-eighteenth century, when the cloth industry funded the construction of fine Georgian buildings on newly widened streets.

There’s also a Natural History section, with the requisite stuffed elephant and giraffe, a whale skeleton, and much more, partly in the historic display cases, and a large World Cultures section (covering traditional communities everywhere except Europe) where I of course particularly appreciated the items from British Columbia and Alaska, as well as Oceania (including items from Captain Cook’s voyages), Asia, Japan and elsewhere. There’s no permanent art display but they put on temporary shows from the collection (including some excellent Hepworth drawings at the moment).

The area behind the museum has been branded The Museum Quarter – Exeter Phoenix is a pretty substantial and go-ahead arts centre, but behind that there are just some gardens and the remains of the city walls and the castle, founded by William the Conqueror after 1068 but now pretty ruinous.

The city centre reminded me a little of Norwich and York simply because there are so many small churches there, now mostly redundant and in search of new uses, although I think with less success. Dominating them is the cathedral, founded by King Edward 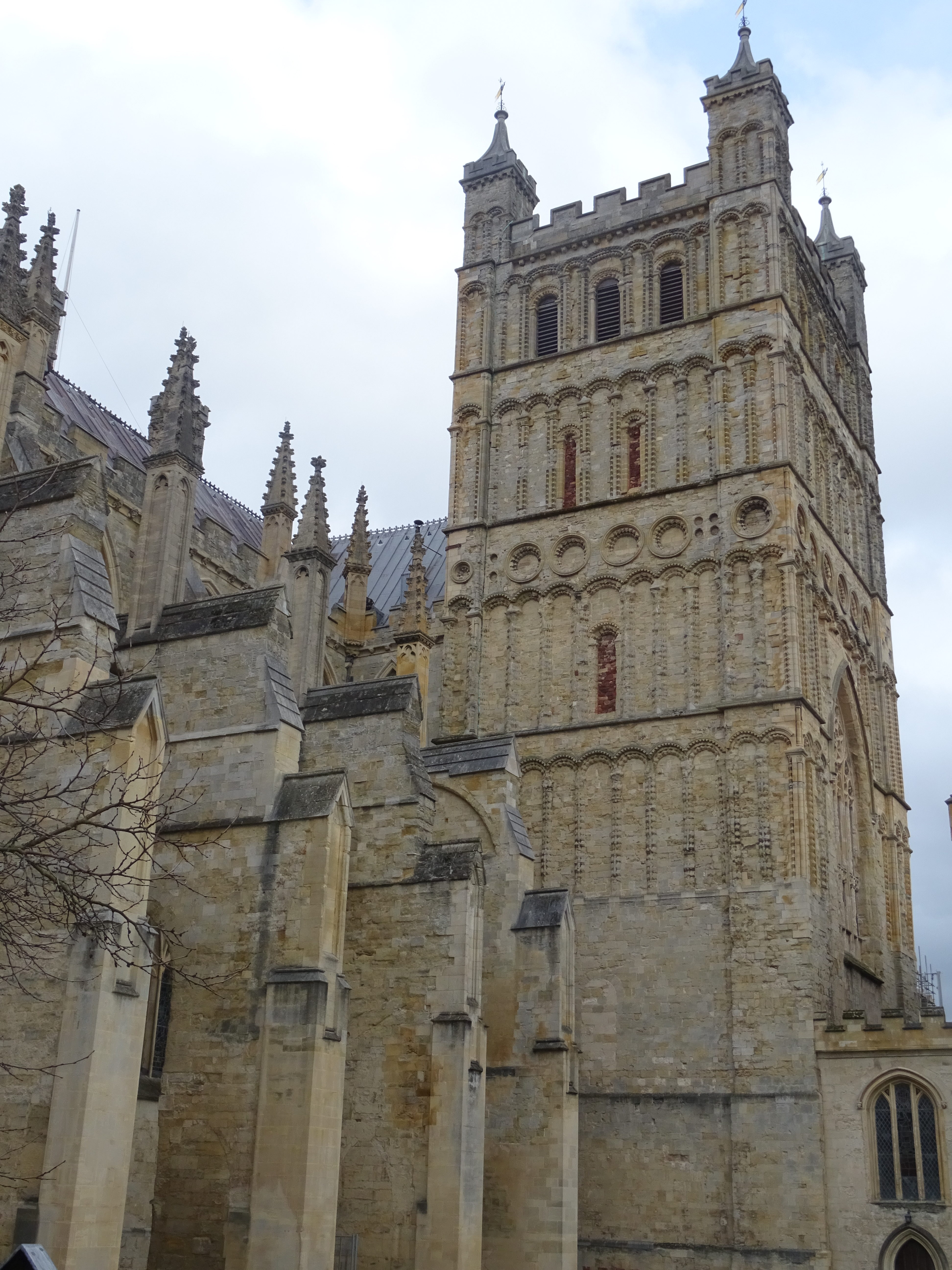 the Confessor in 1050; the oldest surviving structures are the two massive Norman towers that now form the transepts, followed by the thirteenth-century Lady Chapel and Chapter House. From around 1360 the rest of the cathedral was rebuilt, and now boasts a fabulous expanse of Gothic vaulting above the nave and choir, and a western front bearing a stunning display of Gothic sculptures. And there’s more – an astronomical clock, the carved minstrels’ gallery, the bishop’s throne.

The excitement of Exeter

The most exciting thing to happen in Exeter in recent years (after the Exeter Blitz of May 1942, when the Luftwaffe pounded the city for an hour and twenty minutes, killing 156 people) was in October 2016 when the Royal Clarence Hotel, facing the cathedral on Cathedral Green, burnt down. Opened in 1769, this was supposedly the first establishment in Britain to use the French word ‘hotel’. There was some controversy about the firefighters’ risk-averse tactics, and then at the end of 2018 rebuilding work stopped due to sticky negotiations between owners and builders, so it seems unlikely to reopen in 2019 as planned. [Indeed, in August 2019, the owner gave up due to high costs and put it up for sale.]

There’s also been the considerable excitement of Exeter Rugby Club’s rapid rise from obscurity (National League 1, until 1997) to winning the English premiership in 2017 and competing in Europe, with five of its players regularly appearing in the England team (OK – Jack Nowell, Henry Slade, Harry Williams, Ben Moon and Luke Cowan-Dickie). Its Sandy Park stadium, opened in 2006, hosted three games in the 2015 Rugby World Cup and will see more internationals, notably England vs Italy this very weekend, which attracted a crowd of 10,000, a record for an England Womens’ game.

And then there’s the slowburning drama of FlyBe, based at Exeter airport, which evolved fairly accidentally (it was known as Jersey European from 1979 to 2000) to fly relatively small planes on regional and crosscountry routes where it’s very hard to make any money. After coming perilously close to bankruptcy, it was bought in February 2019 by a consortium of Virgin Atlantic and Stobart Aviation. Ryanair recently announced that from the summer of 2019 they will fly from Exeter to Malaga, Malta and Naples – this shouldn’t  undermine FlyBe, I hope.

The railway through Exeter is unlikely to be electrified in the next couple of decades, but there are now overhead wires from London Paddington as far as Newbury, and also most of the way to Bristol, and trains from London to Devon and Cornwall are now mostly the new electric-diesel hybrids of Class 802. Back in 1986 the fastest train from London (the Cornish Riviera Limited, of course) was accelerated to reach Exeter in a flat two hours – this was a bit optimistic and it was soon eased off (it currently takes 2hr 7 min). From May 2019 the fastest service will again take a flat two hours, but what’s more important is that from the December 2019 timetable re-cast there will also be regular semi-fast trains from Paddington to Exeter, giving a better service to places such as Pewsey and Castle Cary, and meaning that the fast trains continuing to Plymouth and Penzance won’t have to make these secondary stops. The real improvements, however, are coming between Exeter and Penzance, where the new trains’ power doors are knocking a minute or so off every stop and they also accelerate rather faster between stations.

New electric trains in the London area have allowed older suburban trains to move to Bristol, and even older trains are moving from there to Exeter, allowing the gradual development of a Devon Metro – from December 2019 the local services from Exmouth and Exeter to Paignton will run every half hour, and trains will run regularly every hour from Exeter to Barnstaple.

And I‘ll be pilloried if I don’t mention that Exeter has another London service, to Waterloo, which takes at least an hour longer (stopping at places like Feniton, Axminster, Crewkerne…) but has two plus-points – it calls at Exeter Central, which is actually quite close to the museum, and my Network Card is valid by this route all the way from Waterloo to Exeter, giving a third off regular fares.