I recently led a group on the Coast to Coast hike across northern England – it’s well covered by guidebooks and online resources, so I’ll just offer a few tangential thoughts here. Speaking to some Australians, I found that the C2C is the only British hike they had heard of before coming here (and the Camino de Santiago and the Tour du Mont Blanc are more or less the only ones on mainland Europe), and they were surprised how poorly signed it was. I explained that when Alfred Wainwright first wrote about it in 1973, he called his book ‘A Coast-to-Coast Walk’ and invited people to create their own version, knitting together public footpaths in the same way that he had done. But we like sheep (Herdwicks, of course) 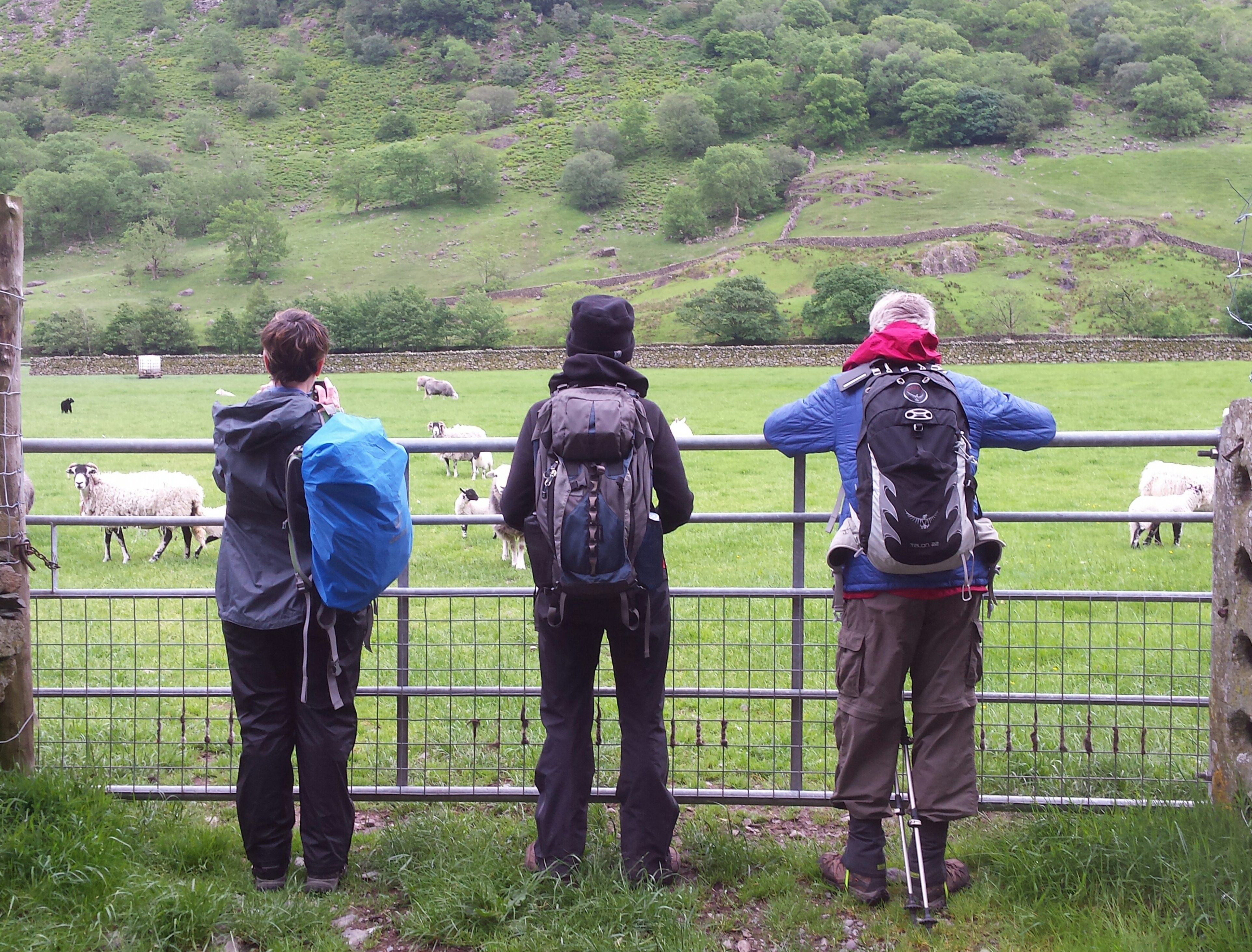 have gone astray, all treating his book as the bible, and as more and more B&Bs and cafés (not to mention baggage transfer services and the like) have opened along his route it’s become more and more entrenched as THE Coast-to-Coast. So maybe it needs to become a National Trail, like the Pennine Way, which was very busy when I was a lad but is not much heard of now. Fair enough, because it is pretty dull and samey.

We (Wilderness Travel) follow Wainwright’s advice and have created our own version of the C2C, starting from Ravenglass (to cut out the very dull first day from St Bees Head) and staying two nights in each hotel (with one exception) to fit the best hikes in around excellent feeding opportunities – we also cut out three more dull days, through Shap and across the Vale of York, both largely flat and agricultural and mostly on asphalt, and the slog across the Pennine watershed, which is largely peat bog. After the driest winter in twenty years, the worst bits of peat bog are not actually too bad, and there were lots of heli-bags of rocks by the path, indicating that more boggy sections are to be made dry and hiker-friendly. 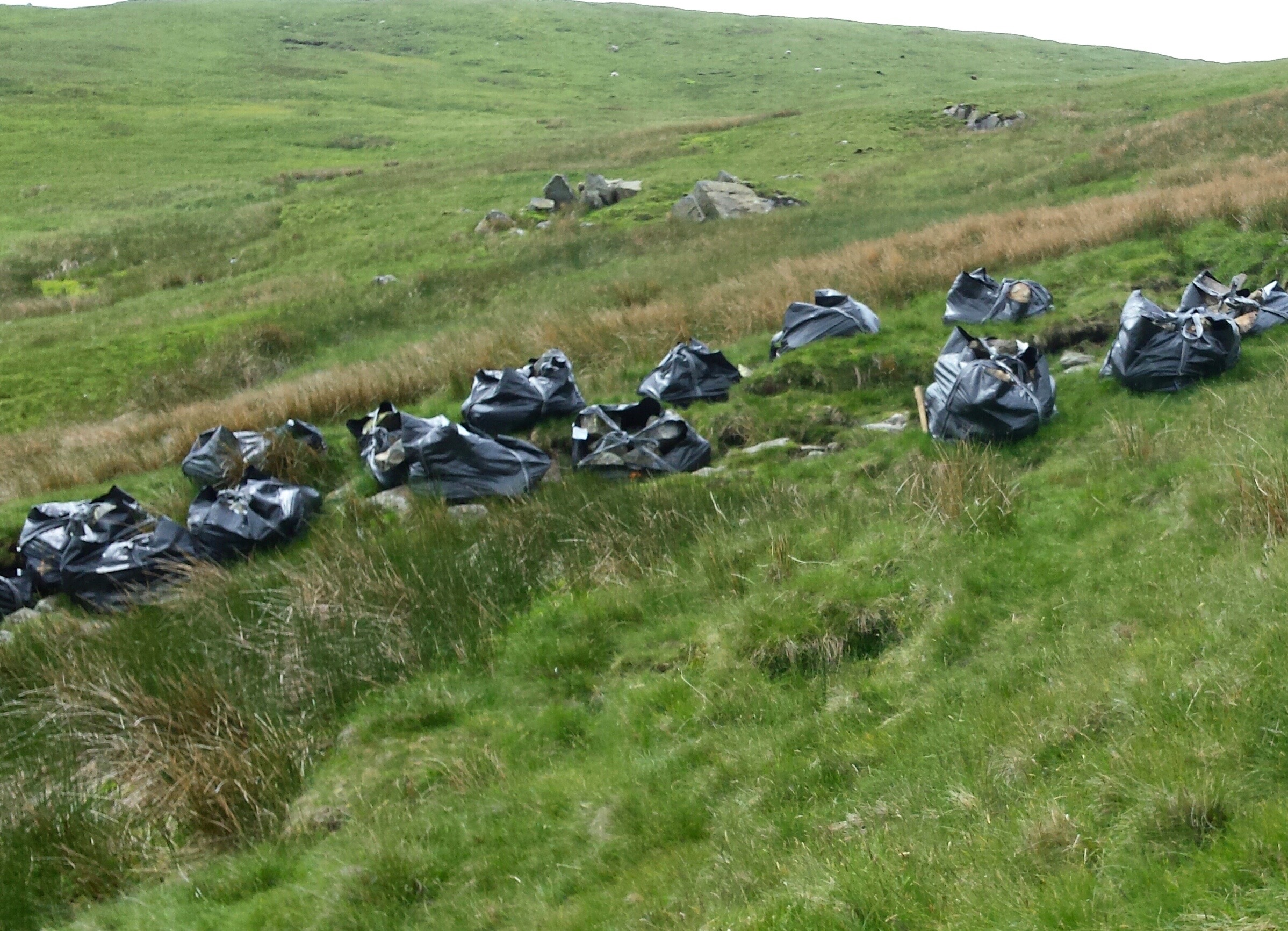 But there’s actually been far more wet weather than dry in recent years – much of the Lake District was badly hit by Storm Desmond in December 2015. In Keswick the Pencil Museum, the town’s main rainy-weather attraction (ironically enough), was flooded and closed until May 2017 (taking the opportunity for a major revamp too). Across the road, the excellent Luca’s Ristorante just closed down, while the Keswick branch of fabulous Booth’s supermarket chain was also flooded, reopening in March 2016 – known as ‘the Waitrose of the north’, its bags carry tags like ‘Cumbria not Umbria’ and ‘fettle not feta’ (Yorkshire fettle being a suspiciously feta-like cheese). I saw Fitz Park, by the river in the centre of Keswick, being returfed in summer 2016, while the very popular Keswick to Threlkeld Railway Path was badly hit – a couple of hundred metres of path were washed away a mile or two east of town, two bridges collapsed into the River Greta and a third was soon closed. About half the path (from Low Briery to Brundholme Rd) reopened by Easter 2016 and the two collapsed bridges were cleared over the summer of 2016 (once the water was low enough), but rebuilding, or perhaps rerouting of the path, now seems to be stuck in a morass of national park planning and funding decisions. The A591, between Keswick and Grasmere, was also washed out, but was naturally a much higher priority than a walking and cycling route and was reopened in May 2016 – the lane on the far side of Thirlmere was used for a bus shuttle until a temporary roadway opened.

And spare a thought for Glenridding, which was hit hard twice in December 2015, by Storms Desmond and Eva – there was a lot of construction work underway in the streambed in the summer of 2016, and it was still going on the next summer. 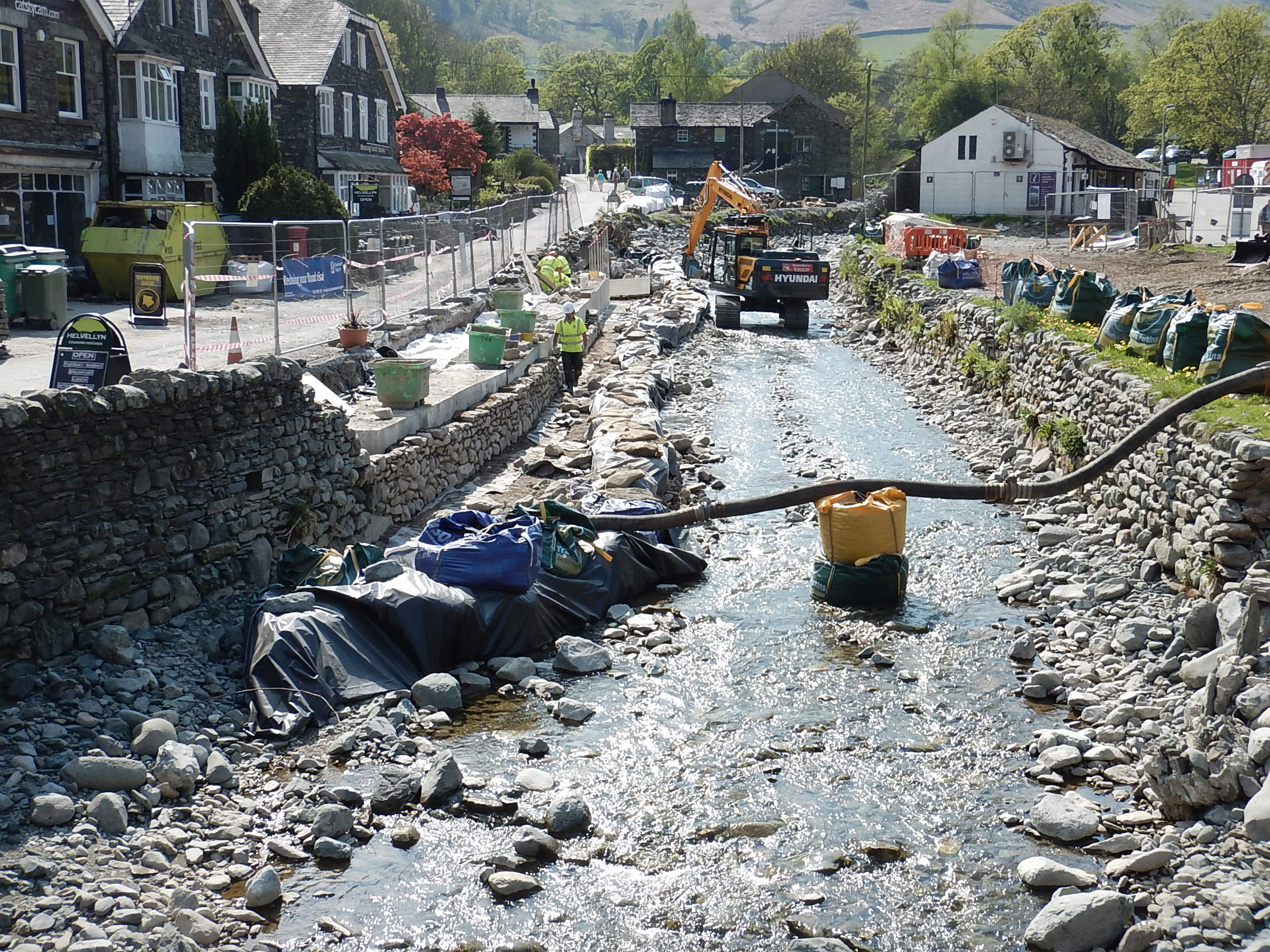 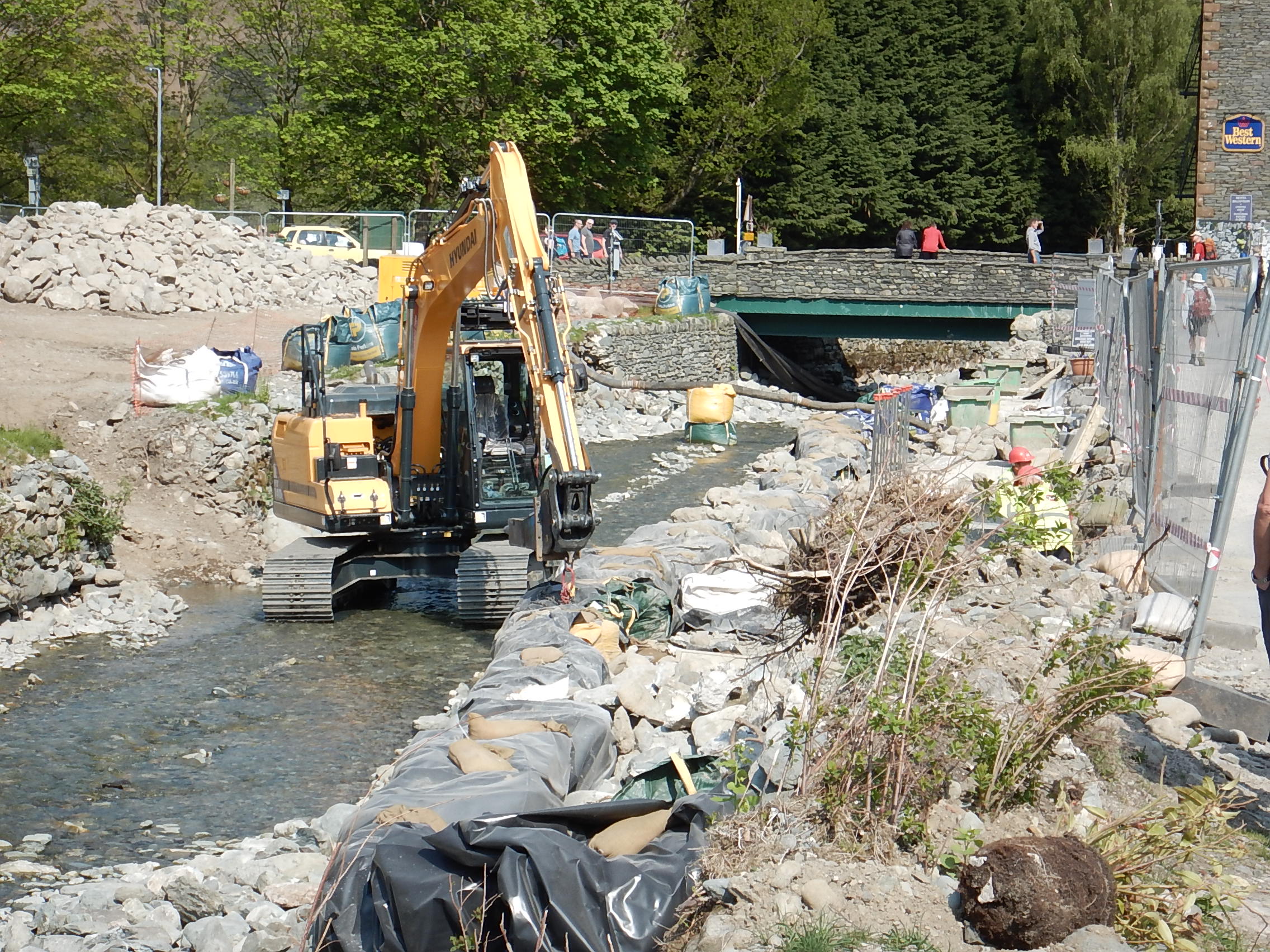 Glenridding reopened at the end of May 2016, in an enlarged and characterless form. Appleby was also hit by Storm Desmond and was just getting back to normal in May, in time for its annual invasion by Travellers attending the Horse Fair (which many residents would probably be happy to have seen cancelled).

East of the Pennines, York was also hit by flooding on Boxing Day of 2015, the most high-profile casualty being the Jorvik Viking Centre – this has undergone a £4.3m ‘re-imagining’, with more cutting-edge technology, and reopened in April 2017. I’m sure it’s pure coincidence that the Yorkshire Museum has an exhibition entitled ‘Viking – Rediscover the Legend’ in the summer of 2017 – a reduced version of the successful British Museum exhibition. And it’s definitely a coincidence that York’s Mansion House (home to the Lord Mayor) is reopening in late 2017 after a couple of years of painstaking restoration and delays. It will display civic treasures with an exhibition of the city’s gold and silver collection, a Georgian kitchen and new virtual tours. This will presumably compete with Fairfax House, which claims to be ‘the finest Georgian town house in England’. 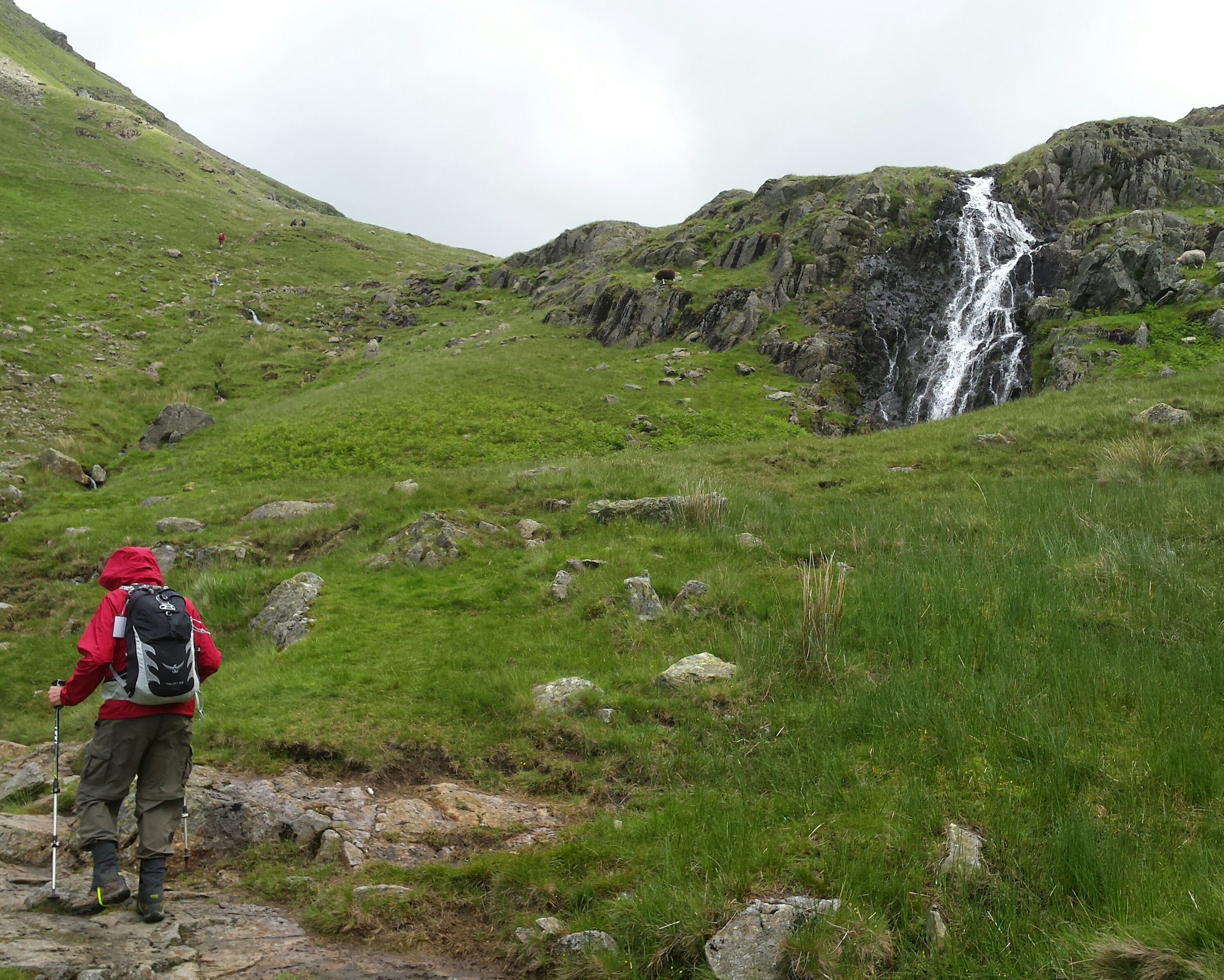 In Keswick we love to eat at Morrel’s (shame about the group of noisy Americans – oh, no, that was us) and to drink at the Dog & Gun (recently refurbished but still offering goulash and Old Peculier – most of the time, anyway). It’s also worth checking out Magnolia, almost opposite Morrel’s – a bistro-bar with a great range of Belgian beers (also to be found in the Open All Hours Premier shop).

In Richmond (North Yorkshire) we have to stay at the King’s Head due to the lack of suitable alternatives. It’s just been refurbished and the ground floor is now a coffee-bar with no drinkable real ale when we were there (gin and tonics for all!), and reception is now upstairs. The bedrooms have weird spotlights and back-lighting behind the bedhead and the kind of ‘cool’ showers with controls that don’t show what they do or where the hot water is. We weren’t impressed.

[June 2021 update – I’ve just been back to Keswick, and I’m sorry to say that Morrel’s has closed – nothing dramatic, the owners seem to have retired, and the premises are now occupied by Fellpack, which is more of a hip bistro but will doubtless be fine. Still, it’s a shame.

I did grab a snack at Kat’s Kitchen, a vegan café by the Greta Bridge on the west side of town – it was good, although the choice is perhaps a bit specialised for some people. The town centre was absolutely heaving with people, so it was a welcome oasis of peace and quiet. Later we got Chinese food from Golden Hills, which bore absolutely no resemblance to the slimey takeaway I’d had in Hexham – this is real cuisine, properly prepared.

The Keswick to Threlkeld Railway Path has reopened, with four fairly striking steel-arch bridges and a smooth wide surface that gets you in or out of town very easily. I found a bit of footpath on the former railway past Threlkeld Quarry too – it would be great to have that improved and linked up, although the A66 is a bit of a barrier. Incidentally, if cycling east to Penrith on National Cycle Route 71, there’s no need to take the signed detour from Scales north to Mungrisdale, as long as you’re happy to cross the A66 twice – the old Keswick-Penrith road is still there just to the south.

I also went to the Keswick Museum at last (it’s not easy to catch it open when you’re leading hiking groups) – it’s small but varied and well presented, and nothing like the description in my 2013 Rough Guide to the Lake District (‘elderly glass cases’…) – it was actually closed from 2012 to 2014 for a thorough refurbishment and now has perfectly modern displays. ]