If you think Bratislava is small and perfectly formed, just wait till you see Trnava, just half an hour away by fast train (once or twice an hour). I’ve added it to the ‘Beyond the City’ chapter of the Bradt City Guide to Bratislava which I’m updating at the moment, as it’s just too nice to miss. Just a short description, but I can go into a bit more detail here. A medieval market town (which owed much of its prosperity to the German settlers who moved here from the early thirteenth century), it was the seat of the Archbishop of Esztergom from 1541, when Hungary south of the Danube was occupied by the Ottoman Turks, until 1820, and of a Jesuit university, which played an influential rôle in the Counter-Reformation, from 1635 to 1777. Most of the city walls survive, as well as churches, synagogues and museums, and the town centre has recently been pedestrianised (the Slovaks do this very well) and is generally spick and span. Although the archbishop returned in 1977 and a new university opened in 1992, it’s nowadays a quiet, largely pedestrianised town (although a PSA Peugeot Citroën car factory opened here in 2006 and FC Spartak Trnava did win the Slovak football championship in 2018). 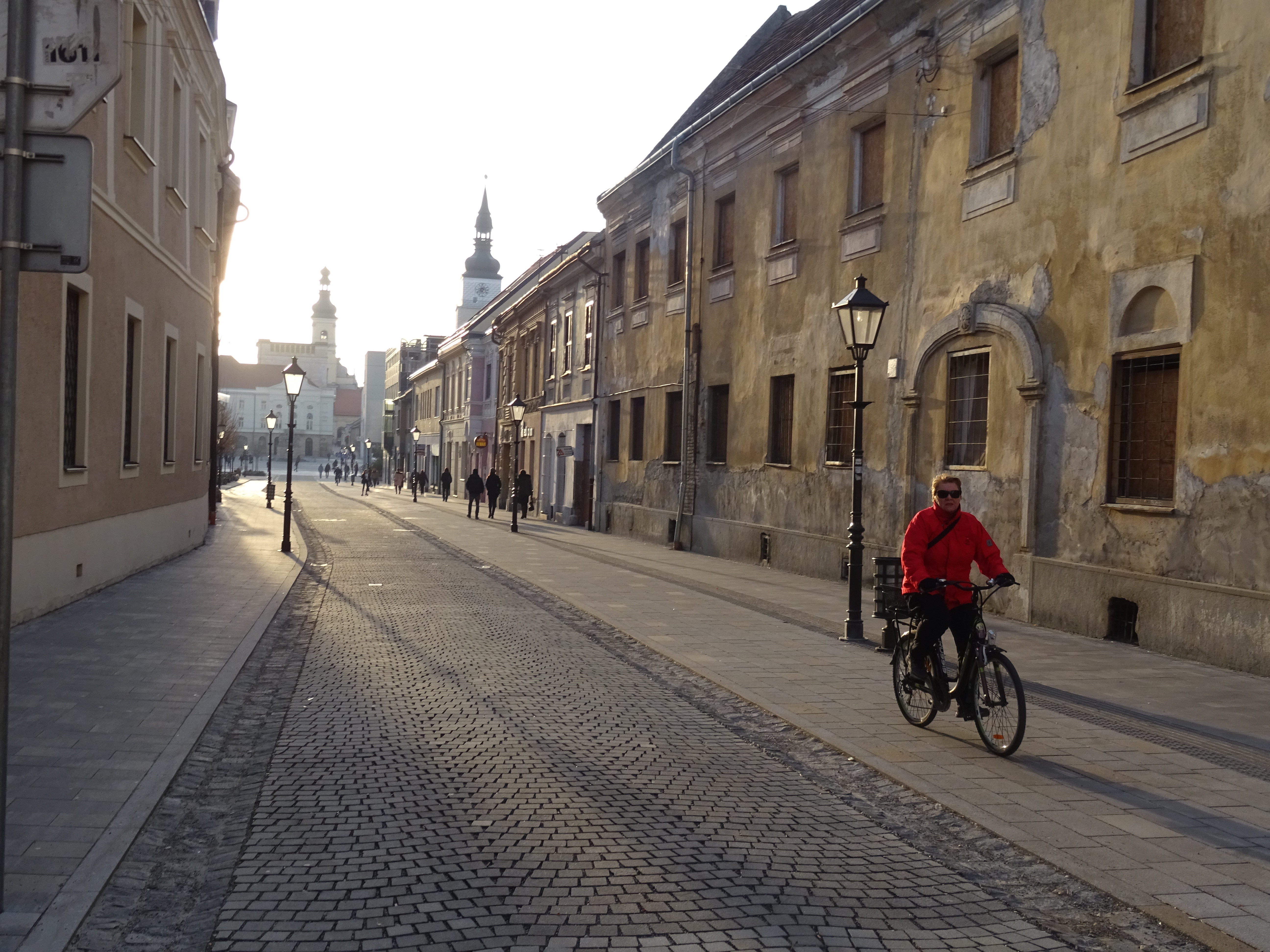 The central crossroads is marked by the 16th-century town tower (containing the tourist office) and Slovakia’s oldest theatre, opened in 1831; the basilica of St Nicholas (the original cathedral, dating from 1380-1421) is a few hundred metres to the east, with a heavy exterior and a dark interior due to having murals rather than windows on the north side of the choir. A block to the north, the University Church of St John the Baptist (consecrated in 1637, and now the cathedral) is a stunner, though, with a gorgeous Rococo interior of pale apricot, white and gold. The ceiling is spectacular ceiling, and the wooden altar (1640) is just huge, at 20.3m in height. Just south of the cathedral, the town’s Orthodox synagogue now houses an attractive café (open 10.00-22.00 at least, every day); the grander Status Quo synagogue (1887) is now an art gallery.

There are lots of other churches (St Anna, St Jacob, St Joseph, the Assumption, Holy Trinity…), either built in the Baroque style or subsequently modernised into that style when the town was at its ecclesiastical peak, when it was known as ‘Little Rome’ or ‘the Slovak Rome’. I amused to see that the cultural centre calls itself Little Berlin in hommage to Europe’s cultural powerhouse. The church of St Helen, on the way towards the station, is an attractive little place that retains more Gothic features than most of the others. Monasteries and seminaries are also now used for cultural purposes, with the West Slovakian Museum in the Clarist convent (in use by 1239 and rebuilt in Baroque style in the seventeenth century) and its subsidiary branch, the Museum of Book Culture, in the Oláh Seminary (1561). There’s also the Dom Hudby (House of Music, dedicated to the local composer Mikuláš Schneider-Trnavský), in a Baroque town-house.

I can’t say much about accommodation (it’s within very easy reach of Bratislava, so there’s no need to stay), but I did notice the Dream and Phoenix hotels which seem pleasant and affordable and are well located on Kapitulská, a largely traffic-free street between the basilica and the museum. There’s certainly a great café and patisserie and a cocktail bar next to the Town Tower; for beer, you could try the Lokal Pub cellar bar at Hlavná 29 in the centre, but you could also head a little way north from the old town to the Sessler brewery.

At the other (eastern) end of the country, Košice is actually Slovakia’s second-largest city, but it still feels like a small town, with almost everything of tourist interest clustered along one long street-cum-square. The cathedral and state theatre stand in the 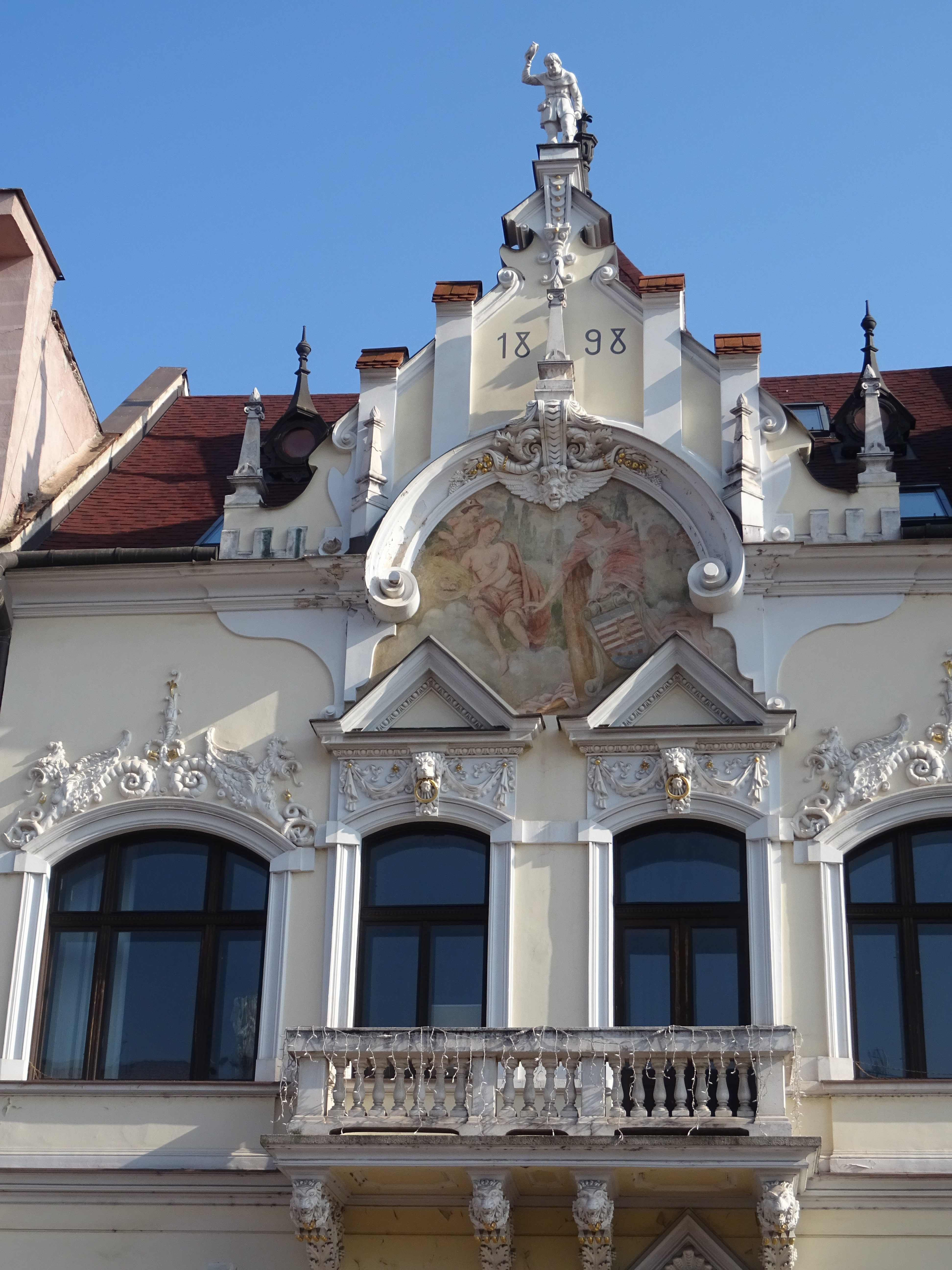 centre of Hlavná námestie, which continues north for about 800 metres to the massive twin buildings of the East Slovak Museum, and its whole length is lined with Renaissance, Baroque and Secession townhouses and some fine churches – it’s a spectacular sight.

In fact, very little of the two huge museum buildings are in use, and unless they have expansion plans I’d say they should move everything into the western one, which already houses the Košice Treasure, a hoard of coins probably buried in 1682 (when the city was seized by rebels) – they’re mostly Hungarian (naturally) and Dutch, but there’s also a Thracian stater of Lysimachos (323-281 BC, from Tomi, now Constanța in Romania) and a unique Edward IV coin from London. It may sound dull but is very well displayed, with interactive screens, and well worth the visit.

The East Slovak Gallery is also split between two buildings, and again it might make sense to for them to be brought together, although there’s less sense of echoing empty halls. Founded in 1951, in 1979 it was moved to a Baroque townhouse at Alžbetina 22, but in 1985 a terrible fire destroyed 1,030 works of art. There’s still a fine collection of over 700 paintings from the late nineteenth and early twentieth centuries, housed since 1992 in the former County Hall (dating from 1779) at Hlavná námestie 27. Local artists were actually heavily involved in the plein-air landscape painting movement at the end of the nineteenth century, which grew out of the Nagybánya School in what is now Baia Mare, which I’m familiar with from writing the Rough Guide to Romania. Mainly influenced by Jules Bastien-Lepage, they combined impressionism and naturalism to create a luminist style (a term usually associated with the Hudson River School, who developed a similarly detailed and serene style of landscape painting). Art Nouveau (or Secessionism) was also important, and then in the 1920s Košice was a major centre of avantgarde art. The building at Alžbetina 22 now houses temporary shows, and is next door to the Löffler Museum, dedicated to the sculptor Vojtech Löffler (1906-90), as well as a collection of self-portraits by local artist and contemporary art shows.

The cutting-edge contemporary art scene is more in evidence at the Kasárne and Tabačka Kulturfabrik cultural complexes, both created for Košice’s year as European Capital of Culture in 2013. There’s also the Kunsthalle, a striking exhibition hall in a former swimming pool (opened in 1962) which was closed in 1992 (they drained the adjacent river to put a road there instead, and then the ground dried out and cracked the base of the pool) and reopened in July 2013 as an art centre. It reminded me of La Cité Miroir in Liège, built as a swimming pool in 1939 and reopened as an art centre in 2014. 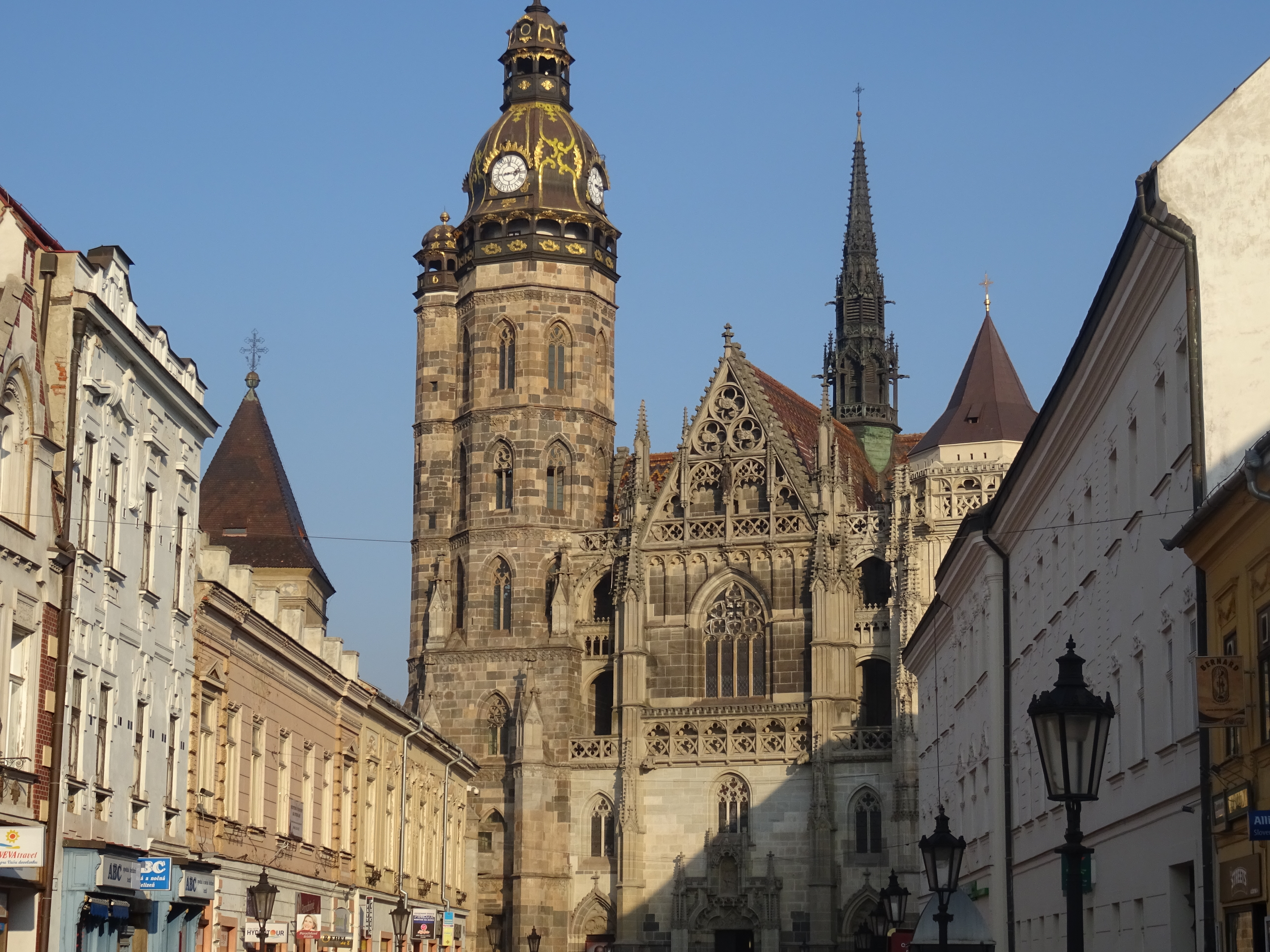 For those of us with more traditional tastes, perhaps the prime cultural attraction might actually be the cathedral of St Elizabeth, the largest in Slovakia (it’s routinely described as the most easterly Gothic cathedral in Europe, but that could only be true if Romania and Ukraine were not in Europe – there are fine Gothic cathedrals in Cluj, Sibiu, Alba-Iulia and Lviv, not to mention the Black Church in Brașov). It’s a bit assymetrical outside, but is spectacular inside, with a nave and double aisles plus a transept of the same height and width as the nave, creating a huge central space. Immediately to the south is the slightly older church of St Michael, which served as a cemetery chapel, and to the north is the Urban Tower, rebuilt after the great fire of 1556 in Renaissance style, with a ground-level 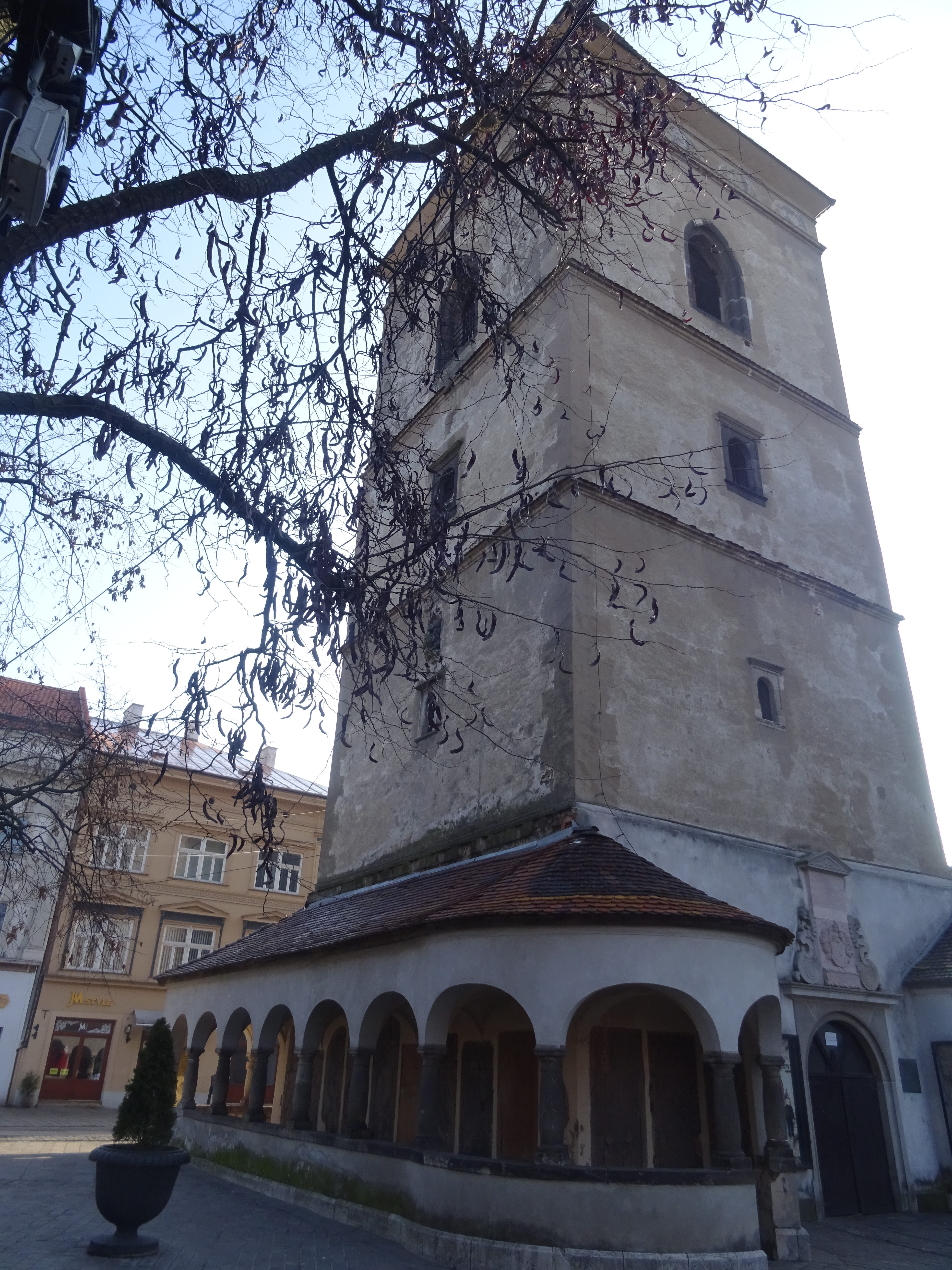 arcade around it. There are other fine churches along Hlavná (the Franciscan church has a fine Baroque façade), and also several synagogues, of which the large domed Neolog synagogue on Moyzesova, built in 1927, is now home to the city’s orchestra.

One cultural treasure that the people of Košice are largely unaware of is the novelist Sándor Márai (1900-89), who was born here, studied in Germany then settled in Budapest, before fleeing communism to the United States; he translated stories by Franz Kafka for Košice’s Hungarian-language newspapers as early as 1921. He wrote 46 books in Hungarian but was not translated into English until the 1990s, since when Embers (1942) in particular has become recognised as a fine nostalgic portrait of the multi-ethnic, multi-cultural late Habsburg Empire. It would be great if he could be properly commemorated in his native town.

As for eating and drinking, the Hostinec Pivovar is perhaps the oldest restaurant in Europe, opened in 1542; it is also now a brewpub, with a wide range of unpasteurised and unfiltered beers, including IPA and stout as well as Czech-style lagers. There’s a fairly meaty menu, as well as pasta and gnocchi. You could also try the Žil Verne (Jules Verne) pub or the Schalkház café. There’s also a Georgian restaurant, Gruzinák, which was closed on a Sunday evening when I went looking for khachapuri. All of these are on Hlavná námestie.

I also visited Pezinok and Modra, small wine-making towns just outside Bratislava – they’re lovely places and already covered in the Bradt guide, but I’m adding a museum in each town.