Having followed the tracks of Rebecca West through Macedonia, Kosova and Montenegro, I was keen to follow Edward Lear through Albania and to Corfu, which was his winter base from 1860 to 1864 (in which year it ceased to be a British protectorate). He wrote that ‘no other spot on earth can be fuller of beauty and of variety of beauty’. I’ve always found Greece rather too arid for my tastes and the light too bright and harsh on the eyes – and I’ve found it remarkably cold in November too. But Corfu (in May) turned out to be very different – it was indeed beautiful, and the interior was remarkably wild and incredibly densely vegetated. It definitely rains a bit here. I was 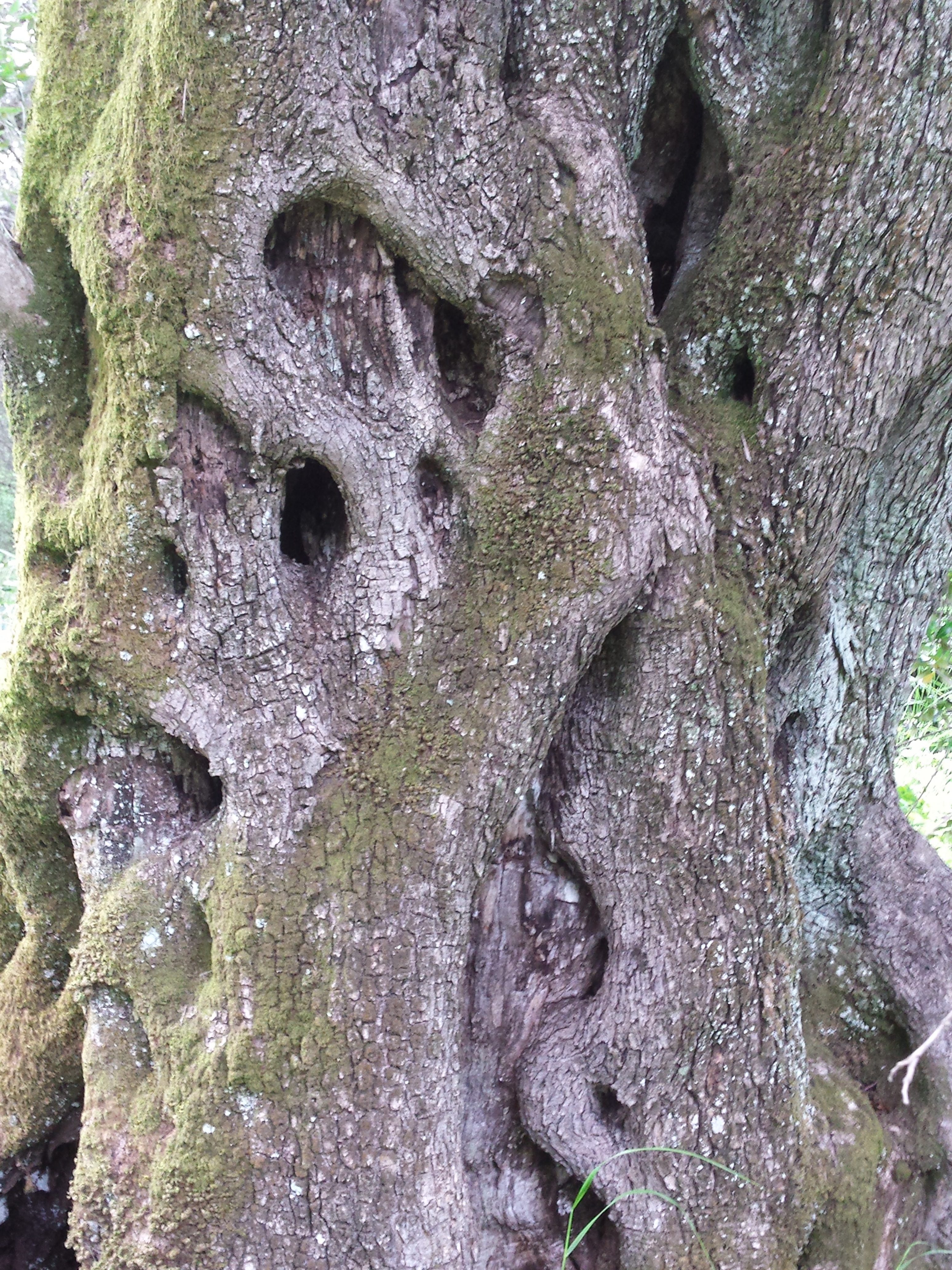 particularly impressed by the many aged and incredibly twisted olive trees, perhaps dating from the seventeenth century when the island’s Venetian rulers encouraged the inhabitants to cultivate them. We didn’t really frequent any beaches, but the coast seems to be developed only where it’s accessible, often with cliffs in between.

I arrived by hydrofoil from Sarandë in Albania (a very pleasant hour’s hop), but most people find themselves in Corfu airport’s tiny arrivals hall, where half the arrivals are directed to buses to the south of the island for the mass-market beer-and-chips resorts and half rent cars to go to villas in the north (including my family). There are also some backpackers who walk (or cycle, or take a bus) the 2km to Corfu Town; and rumour has it that some Greeks arrive by plane, but the domestic arrivals are off to one side. We also saw between one and four cruise ships in harbour every day.

It’s a great place for tourism, largely because the Corfiots are so nice, 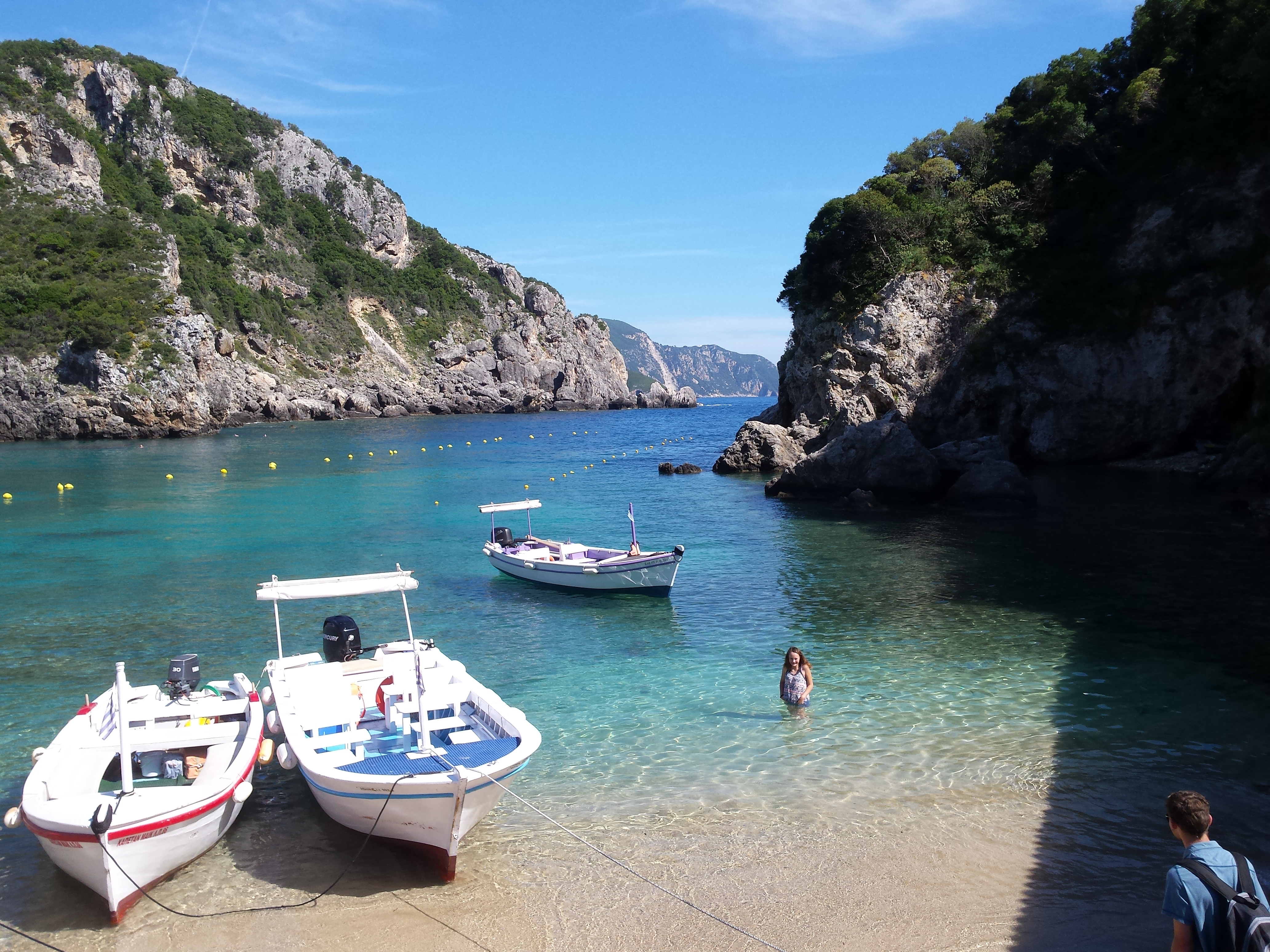 but also because of the variety of experiences on offer. In addition to lazing on the beach and in town, you can rent all kinds of boats and boards, or bikes, scooters and quad bikes to cruise around the island. In the interior you’ll glimpse a few sturdy British (and maybe German) hikers, some tackling the Ionian Trail, which runs for 200km the length of the island (and the other Ionian islands to the south), 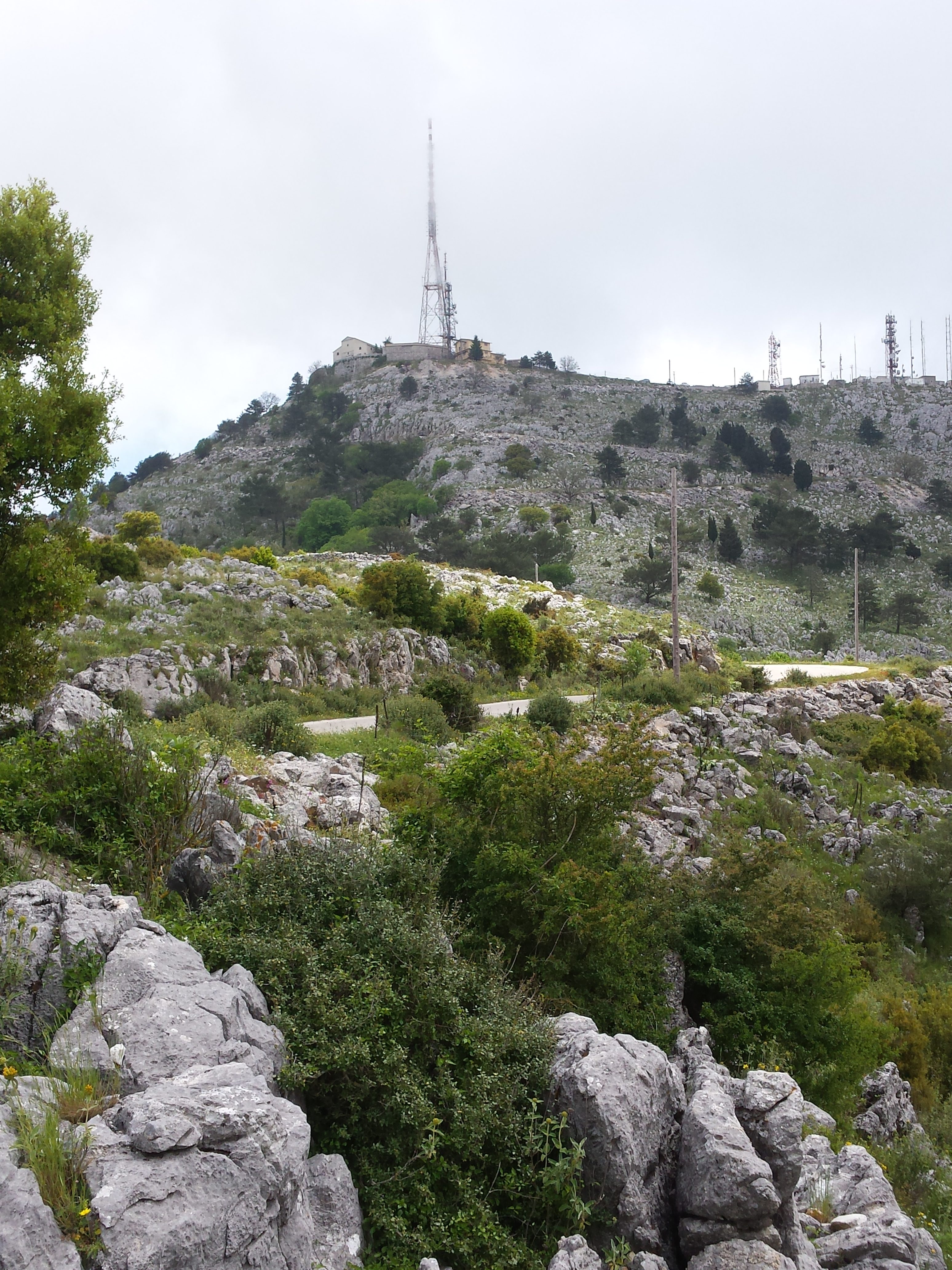 passing through all its ecosystems and traversing Mount Pantokrator (Ruler of All), the island’s highest peak at 911 metres. It’s best to walk from south to north, as the island gets steadily hillier and more beautiful, and you’ll have the sun at your back rather than in your eyes, as a rule.

In addition, because Corfu and the other Cycladic islands had such a different history to the rest of Greece – ruled by the Byzantines and Angevins, Venice, France, Britain, even briefly by Russia (1799-1807), but never by the Ottomans – there’s plenty of historic interest. The area of the Old Fortress, to the east of the present Corfu Town, was occupied from the mid-sixth century BC, but the Greek settlement of Chersoupolis grew up on the Kanoni peninsula, just south of town (and immediately east of the airport), and already in the fifth century BC Korkyra was one of the three great naval powers of Greece, along with Athens and Corinth. Various temples have been found in this area, now known as Kanoni, and more ancient remains are being

discovered. Don’t miss the Archeological Museum, in a fine modern building just south of the centre, which has a good display of Greek remains (and relatively little from the Roman period); nor the Museum of Asian Art, in the grand Palace of Saint Michael and Saint George, built in 1819-24 to be the residence of the (British) Lord 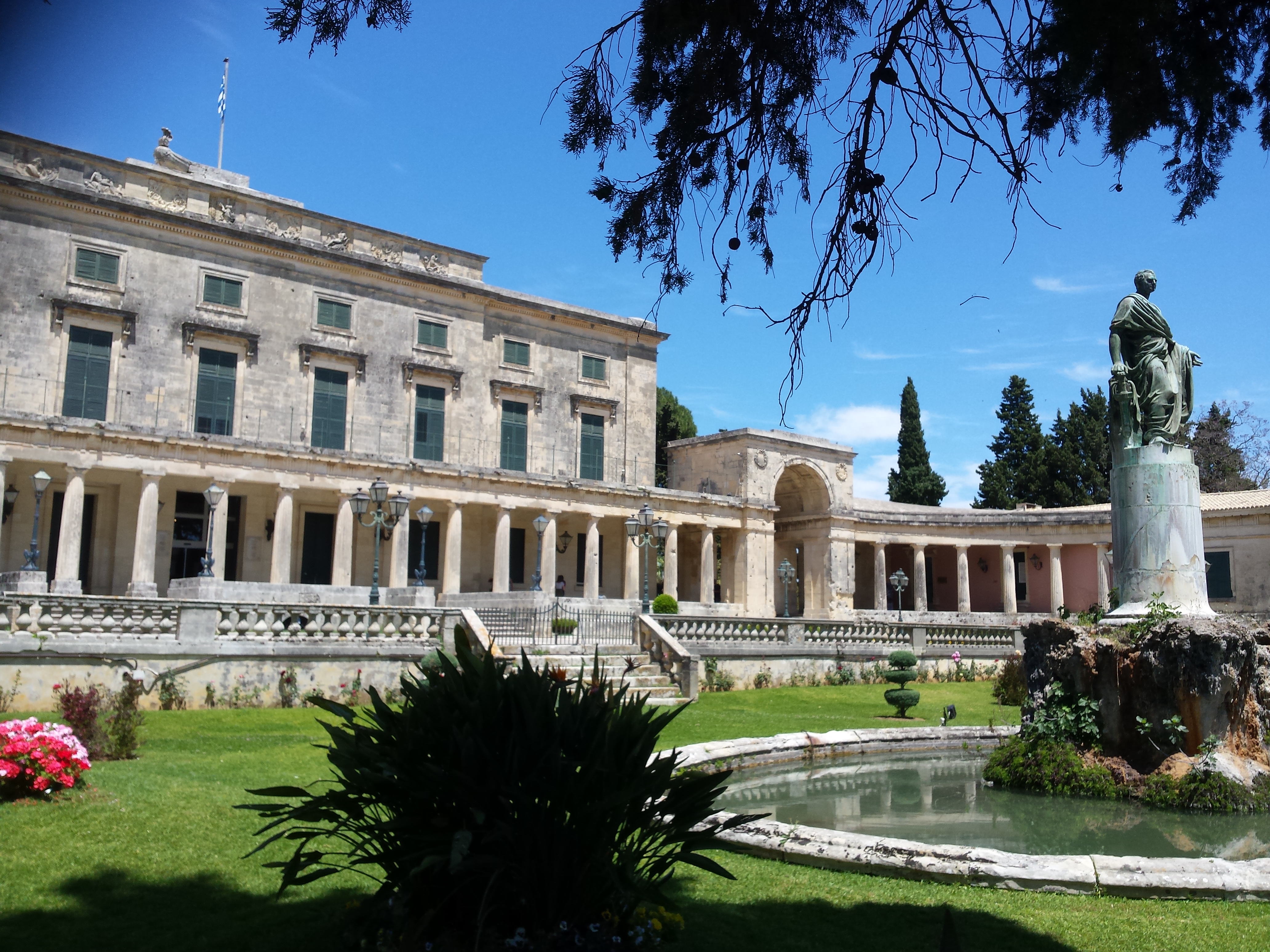 High Commissioner of the Ionian Islands. The museum is surprisingly serious and professional; but many people will miss the two staircases up to the Central Asian section (with good coverage of ikat from Uzbekistan and more on Japan). There’s a combined ticket to Corfu Town’s museums, which also include the Old Fortress with its mainly Venetian fortifications. 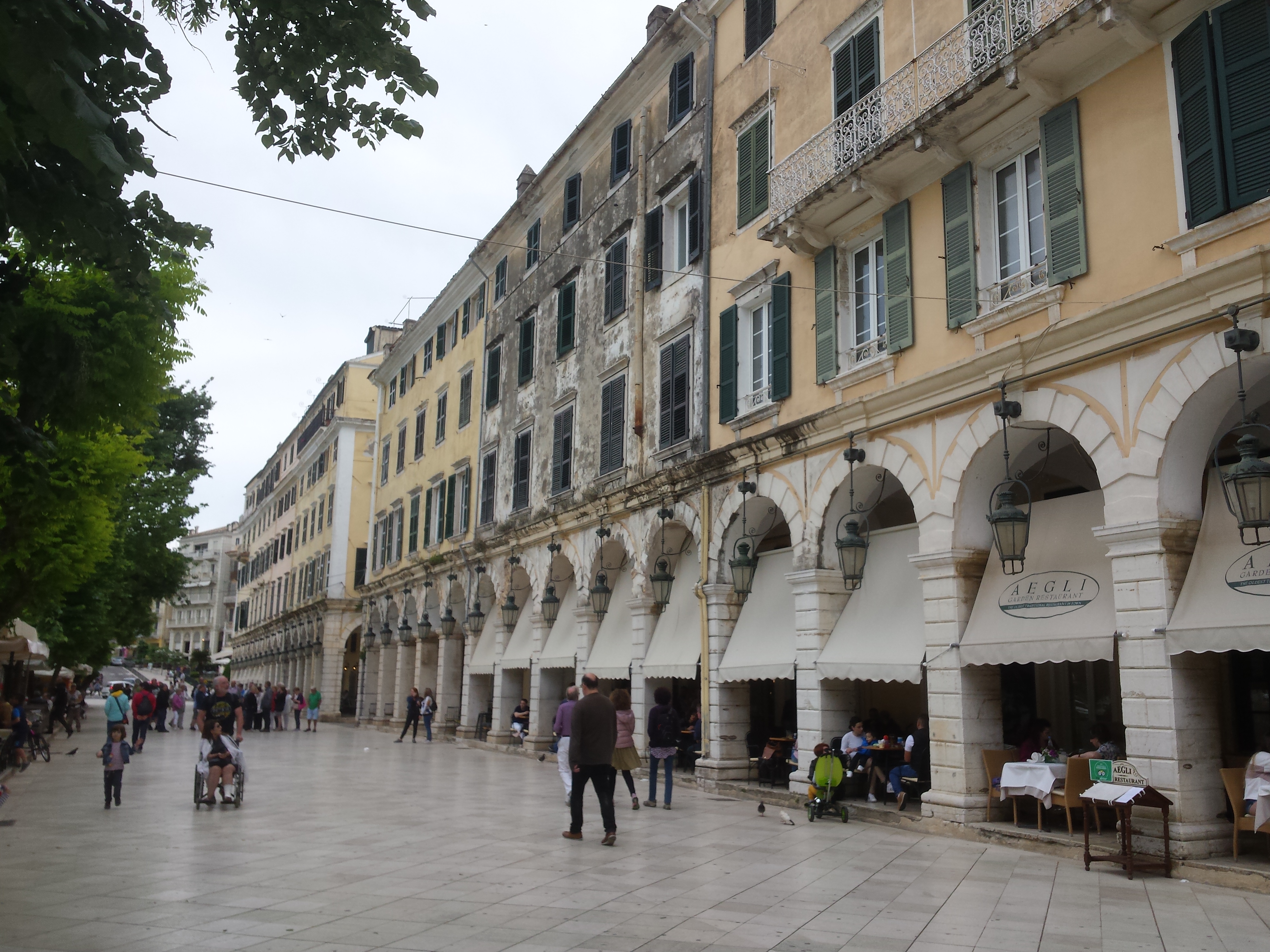 rear of the Liston, a neoclassical arcade of posh shops and pavement cafés that was designed in 1807 by Mathieu de Lesseps (father of Ferdinand, who built the Suez Canal) and supposedly modelled on the rue de Rivoli in Paris. In the heart of the old town, the Town Hall stands on Guilford Street, named after Frederick North, 5th Earl of Guilford (son of Lord North, the British prime minister who lost the American colonies), who was himself the first British Governor of Ceylon (1798-1805). He made his first trip to Greece in 1791 and lived there from 1810 to 1813 and in Corfu from 1824. He was an exaggerated philhellene, who wore classical costume and converted to the Greek Orthodox religion; in 1824 he established the Ionian Academy, the first university on Greek soil. I recently found myself on Guilford Street in London, which turns out to be named after Lord North.

Outside the one and only real town, it’s worth visiting Mon Repos, birthplace of Phil the Greek aka the Duke of Edinburgh, with the remains of a couple of Greek temples nearby on the Kanoni peninsula, and the Achelleion, further south, a triumph of bad taste (mainly Kaiser Wilhelm II’s). It was actually built in 1890 for the Habsburg Empress Elisabeth, better known as Sisi, to escape memories of the suicide of her only son, Crown Prince Rudolf, at Mayerling; after her own murder it was bought by Kaiser Bill (whose sister Sophia was Queen of Greece) and filled with kitschy art which is worth wondering over, while the gardens offer views over half the island. There aren’t many other sights outside Corfu Town – the Shell Museum at Benitses has closed.

Never mind Lear, you say, what about the Durrells? I did skim through Gerald’s Corfu books and learnt a lot about the wildlife that could be seen then (there won’t be so much of it now), but the actual settings are a bit confused – they were based in the northeastern corner of the island, where the posh people (Rothschilds and the like) have their villas now, and lived in a succession of rented houses. Various holiday villas claim to be ‘the Durrells’ home’, but they were indeed a shiftless bohemian lot who didn’t stay anywhere for all that long.

As for Larry, it turns out he was already married and living elsewhere, although Gerry writes as if he was still in the bosom of the family (and totally excludes the wife, with whom he did not get on).

And although Rebecca West didn’t include Corfu in Black Lamb and Grey Falcon, it plays a part as the place where the Serbian army, driven out of their homeland by the invading Austro-Hungarian, German and Bulgarian armies, found refuge in November 2015 after a desperate retreat through Albania – at least 200,000 men died in the snowy mountains, and perhaps 30,000 more died of flu during the cold wet winter that followed. A fascinating tale that is little known nowadays. Their headquarters were on the island of Vidos, a couple of kilometres north of the harbour of Corfu Town – there are persistent rumours of a tunnel linking them, but I don’t think there’s any factual base to them.

I’m not offering any recommendations for places to stay or eat (as we, like many others, rented a villa and self-catered to a certain extent), but I have a few general thoughts. I was surprised to see huge piles of rubbish that had apparently been there since the previous year; in addition there was plenty of grass growing between the paving stones – Sarandë in Albania was far more kempt than Corfu, surprising as that may seem.

The roads are also bad, and the driving a bit chaotic – the Corfiots really don’t like keeping to urban speed limits and double-parking is normal; and if you let someone pull out of a side road five cars will rush through, usually in parallel. I’m the last person to suggest building roads, as a rule, but some kind of bypass for Corfu Town is needed unless they can sort out its traffic problem – but in fact it’s due to the free unregulated provision of car parking, which could easily be sorted out.

We did enjoy Corfu Beer‘s products, in particular the Corfu Red (they also do an IPA, dark bitter, Weissbier and lager) – refreshing but a bit pricey, we thought.