It’s not easy to write about Paris, it’s just too big and too well known, but I think that – in the light of last year’s protests about overtourism in places such as Dubrovnik, Barcelona and Venice – it’s worth saying that tourism has improved Paris greatly. Some of us remember when Parisian waiters simply ignored tourists and anyone who didn’t speak French, and when most restaurants were in any case closed for the month of August while their owners relaxed on the beach. Nowadays Paris feels normally alive all through the summer, and its citizens have realised that tourism is their biggest industry and that they are perfectly capable of speaking a bit of English. It’s a huge improvement!

However the terrorist attacks of 2015, which killed over 200, did lead to a drop in tourist numbers – the Louvre saw a mere 5.3 million visitors in 2016 (down 20%) and the Musée d’Orsay saw 3 million visitors (down 13%). Hotel bookings overall were down 10% in 2016, but Paris remained the world’s third most visited city with just over 18 million arrivals (behind London with 19.8m and Bangkok with 21.5m). I assume the figures recovered a bit in 2017, but when one sees the serpentine hour-long queues to get into the Palace of Versailles or Notre-Dame cathedral it’s not hard to feel that Paris might benefit from less tourism. They could take the time to sort out their dreadful toilets, for one thing. And they could think how to make the odd sandwich (and quiche) without ham or chicken in it.

Anti-tourism protests may seem like a first-world problem (the third world being happy to take the money and the jobs) but it’s not really – Bali is now utterly unrecognisable from the island I saw in 1983, and the sex trade in Thailand and Cambodia is simply disgusting, just to pick a couple of random examples.

Anyway, I pass through Paris a lot but rarely stop overnight, and with baggage there’s a limit to what you can do. However I have managed a couple of stays recently and visited the Petit Palais for the first time – it’s a delightful space (built for the 1900 Paris Exhibition) with excellent mosaics in particular; the art exhibits seem very dull at first but then you come to the impressionists and post-impressionists and it’s suddenly worth the price of entry (which is in fact zero – it is a free gallery). Downstairs there are further galleries dedicated to Antiquity, the Eastern Christian World, the Middle Ages and the Renaissance, which I will have to come back to.

I also went to the Musée Rodin, or at least its lovely gardens (which cost €4, not €2 as our guidebook thought, but are still worth it). As well as lots of biographic information panels there are, as you’d hope, plenty of sculptures, many of them working models for the Burghers of Calais and others of Rodin’s great monumental ensembles. 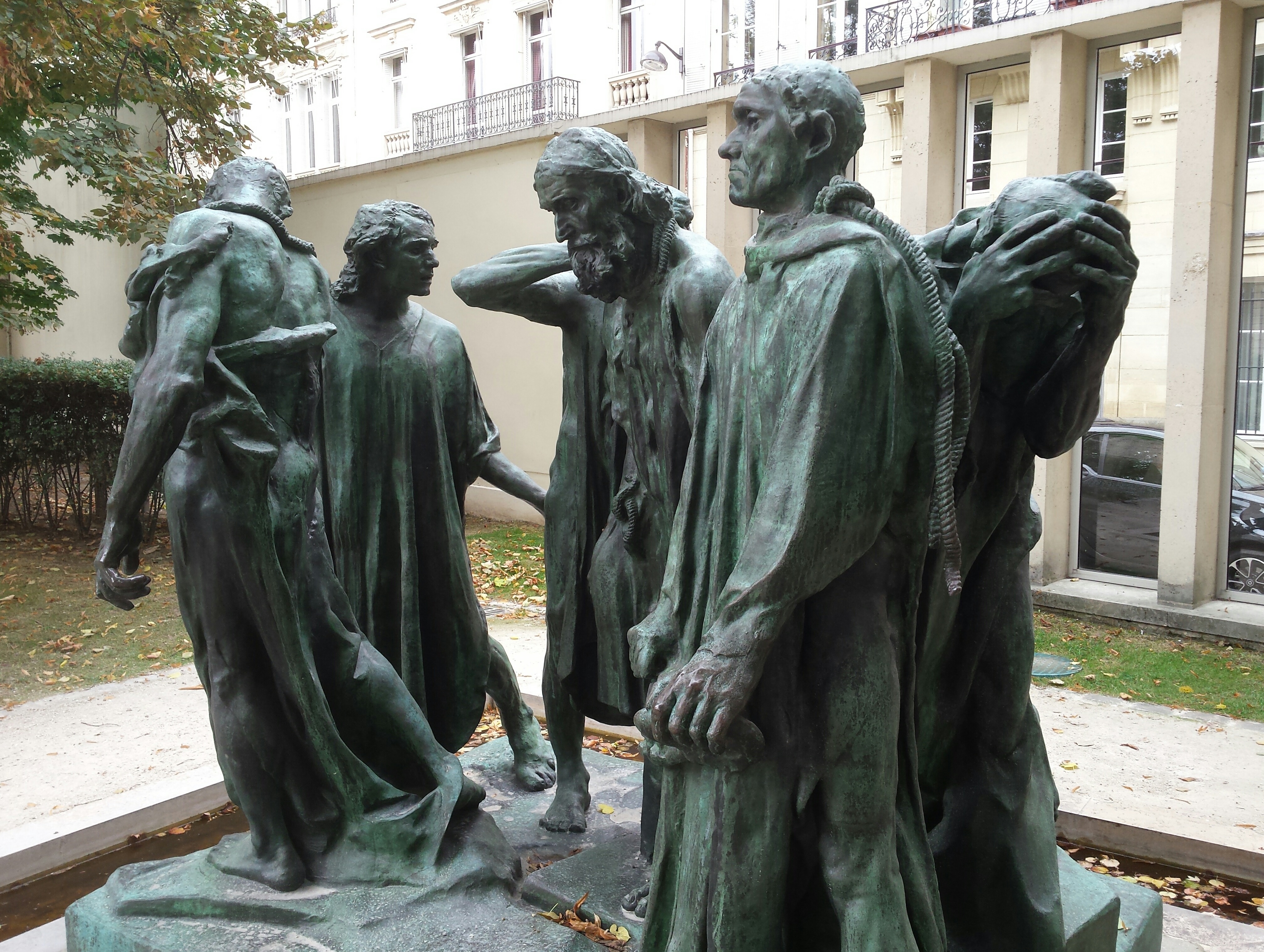 And I revisited the lovely Musée de Cluny, which I hadn’t been to since my school days – the Lady and the Unicorn tapestries are still wonderful (six of them, made in about 1500 in Paris or the north of France, allegorising the five senses and the mysterious Mon Seul Désir, presumably referring to love (the unicorn is a symbol of chastity, but there’s also something undeniably phallic about it). The museum also houses stained glass from the Sainte-Chapelle, pieces of Nottingham alabaster, and sculpture fragments from Notre-Dame, lost when it was vandalised in 1793 and found in 1977 shoring up the foundations of a mansion); and it also incorporated the Bains de Lutèce, the remains of a huge third-century complex of Roman baths, notably the huge vaulted frigidarium, now used to house large chunks of medieval stonework.

The Cluny is quiet and feels like a bit of a backwater – it was the last Paris museum not to have been renovated since the 1950s, it seems, and the Cluny4 project will open it up a bit by 2020, with disabled access to a new welcome building; the museum is currently closed from March to mid-July 2018. With luck they’ll also provide a bit more information in foreign languages (there are a few English and Spanish information sheets, but otherwise it’s all in French.

More art galleries! Why does Paris need more art galleries, I hear you say – but there really are some quite exciting developments coming to fruition this year. It seems to be a rule now that French billionaires have to establish a foundation for contemporary art (the Fondation Cartier, the Fondation Ricard, the Fondation Louis Vuitton), incidentally giving starchitects like Jean Nouvel and Frank Gehry the chance to further boost their profiles; now Rem Koolhas has remodelled a building in the über-cool Marais district to house Lafayette Anticipations, a performance/exhibition space and art incubator that’s a spin-off from the Galerie des Galeries, the exhibition space of the Galeries Lafayette department store. And early in 2019 the Fondation Pinault will be opening a gallery in the striking Bourse de Commerce (Commodities Exchange, near Les Halles).

Something slightly different is the Atelier des Lumières, a digital museum of fine art, opening in April 2018 – this will stage exhibitions on specific artists, the huge digital versions of their paintings supposedly bringing new insights.

And finally, talking of department stores, La Samaritaine reopens in 2018 after a 500 million Euro refurbishment – a harmonious blend of Art Nouveau and Art Deco architecture, it was suddenly closed down in 2005 due to safety concerns, and it was assumed for a long time that this institution of bourgeois French life was gone for good. The glass ceiling and monumental staircase are as good as new, and there’ll also be a hotel, offices and some social housing.